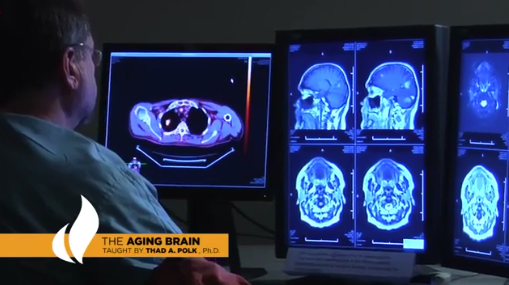 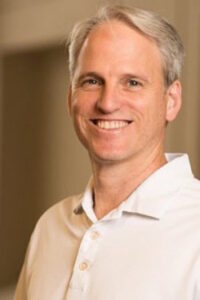 Psychology professor Thad Polk has forgotten about our morning interview to discuss his research on age-related changes in the brain. The 10:30 a.m. appointment has totally slipped his mind.

“I’m so sorry,” says Polk, who is the Arthur F. Thurnau Professor of Psychology. “I was having coffee with a friend, and I just lost track of time.”

The 54-year-old psychologist’s apology has a familiar ring to it. Many of us have found ourselves in a similar situation, perhaps more often than we care to admit.

Ironically, Polk’s momentary brain blip provides the perfect springboard into our conversation about his neuroscientific research on what happens to our brains as we grow older and how changes affect our mental capabilities. For 15 years, he has carried out much of his work at the U-M’s Computational and Cognitive Neuroscience Lab, located near the eastern edge of the Ann Arbor central campus.

“Many people have the mistaken impression that every aspect of cognition and behavior declines with age ─ but that is not true,” Polk says. “The research we are doing on the brain can give us insights into why we see some aspects of cognitive function diminish over time while other aspects remain stable or even improve with age.”

Why we forget things 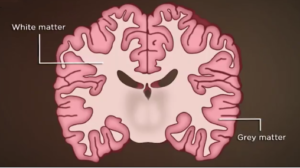 To set the stage, Polk explains the distinction between two types of intelligence ─ fluid and crystallized.

Fluid intelligence refers to cognitive abilities that are relatively independent of what you know. These abilities include thinking logically, identifying patterns, and solving novel problems quickly and effectively.

Crystallized intelligence, on the other hand, involves mental capabilities that depend critically on knowledge, experience, and acquired skills. If you’re a crossword whiz, you probably have a high degree of this type of intelligence.

Lapses of attention are mental hiccups in fluid intelligence, according to Polk.

“In my case, I was distracted while I was having coffee and chatting with my friend,” he says. “The ability to keep track of an appointment doesn’t depend on how much I know or how well-educated I am. Rather, it is associated with an aspect of fluid intelligence called executive control, which decides what you should pay attention to and prevents you from being distracted.”

Think of executive control as the CEO of the brain, Polk suggests. It depends on the very front of the brain’s foremost lobe of “gray matter” ─ the prefrontal cortex ─ and oversees high-level mental processes, such as setting goals, delegating jobs to other sites in the brain, and monitoring progress during mental tasks.

“As we get older, our prefrontal cortex tends to get smaller,” Polk says. “So it’s not surprising that our ability to exert these executive-control functions declines a bit.”

Two other aspects of fluid intelligence ─ processing speed and episodic memory ─ also can diminish with age. The upshot is that 40-year-old parents may be outmatched by their teenage children when playing videogames that require quick mental calculations and fast reactions. Similarly, 80-year-old grandparents may have fuzzy memories about past events, or episodes, such as where they put their keys or who they had lunch with last week.

Our brains reorganize their processing

Fortunately, Polk has some good news about aging and brain function.

“Our brains don’t take these age-related declines lying down,” he says. “There’s now substantial evidence that our brains reorganize their processing in an attempt to compensate for these impairments and to maintain our cognitive abilities as long as possible.”

Visit Polk’s website to participate in his research on the aging brain. Investigate his online class, “The Aging Brain,” at The Great Courses.
What Polk and other researchers have found is that older people tend to activate parts of the brain that young people don’t activate when they are performing the same task. For example, when young adults tackle memory tasks involving linguistic or verbal material, they typically use the left hemisphere of the brain (which controls language processing in right-handed people).

“But evidence shows that some older adults will utilize the right hemisphere as well as the left hemisphere when doing these tasks,” Polk reports. “This recruitment of additional brain areas may help to compensate for the declines in brain structure we’ve observed.” 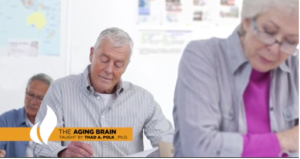 Polk says it is essential to exercise the brain by learning new things. (Image: The Great Courses.)

Furthermore, when researchers compare high-functioning older people (who are aging gracefully and have reasonably good memories) with low-functioning older people (who are struggling with mental processes and recollection), they find the high performers use both brain hemispheres while the low performers mimic young adults by just utilizing the left hemisphere.

The brain has another trick up its sleeve called the posterior to anterior shift with aging, or PASA. Studies have found that young adults performing face-matching and location-matching tasks activate the rear (posterior) parts of the brain, which are involved with sensory processing, such as vision and hearing. In contrast, older adults performing those same tasks often increase activity in the frontal (anterior) areas of the brain, which are important in executive-control functions.

“It’s almost as if older people are being more strategic about how they perform the task compared to their younger counterparts,” Polk says. He notes that aging adults who exhibit PASA tend to outperform those who don’t. This suggests PASA may be a mechanism that enables older adults to perform better, despite some age-related declines in brain structure.

When researchers study crystallized intelligence, which depends upon the nuggets of knowledge, experience, and skills we pick up along the beach of life, they find minimal age-related impacts. This is where parents and grandparents outshine their children and grandchildren. 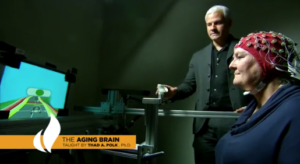 Polk encourages adults to investigate his research and volunteer for studies. (Image: The Great Courses.)

“There is evidence that with age does come wisdom,” Polk says. “As you get up in years, you know more things and have more experiences. Therefore your performance on tasks that tap into that knowledge and experience improves.”

One aspect of crystallized intelligence that tends to get better over time is semantic memory. Older people’s accumulated cache of events, facts, people, places, and words gives them an edge in solving crossword puzzles, playing Scrabble, and answering trivia questions.

Another aspect of cognition that remains strong throughout a person’s lifetime is procedural memory. People who have learned to ride a bike, swim across a pool, speak a foreign language, and drive a car will most likely retain these automatic procedural skills as they get older.

A third dimension of mental life that shows improvement as people age is emotional processing. Various studies have found that individuals report the highest levels of happiness and contentment around age 65 ─ which may come as a surprise to some. One popular theory explains why this happens.

“According to the so-called socioemotional selectivity theory, as we get older we become increasingly selective about our social interactions and focus more on positive things and less on negative things,” Polk says. “In contrast, young adults tend to focus on their future and are willing to take jobs and spend time with people they don’t like to advance their careers.”

As we age, there are proactive measures we can take to maintain and strengthen our cognition, according to Polk. We also can help aging parents, grandparents, relatives, and friends whose mental capabilities may be showing signs of wear and tear.

Have you found a way to keep your brain sharp as you age? Share your tips in the comments section below.
“There is substantial evidence that diet can make a very significant difference, not just in our general health but also in our cognitive functions as we age,” Polk says. The Mediterranean diet, which encourages people to eat more fruits and vegetables and less refined carbohydrates, is thought to be particularly beneficial.

“Regular physical exercise and serious intellectual engagement can mitigate age-related changes in brain structure, such as the shrinking of the hippocampus, which controls long-term memory,” he says.

Polk recommends putting down your smartphone, shutting off the Google search engine, and then picking up an intensive course on digital photography or learning a new language.

“Education is one of the most beneficial protective factors in aging,” he says.

Positive social relationships and a good night’s sleep are associated with better physical and cognitive performance in older people, according to Polk. However, high levels of stress can lead to impairments in brain structure and even damage the chromosomes that carry genetic information.

Although aging is inevitable, there is a silver lining when it comes to preserving and improving our brain health and functioning.

“The negative stereotype of old age as a time of significant mental decline doesn’t capture what it is like for many people,” Polk says. “There are a few cognitive domains that often decline, but they don’t decline in everyone. Furthermore, there are things you can do to prevent or slow that decline. Life’s later years really can be the golden years.”