A most valuable player 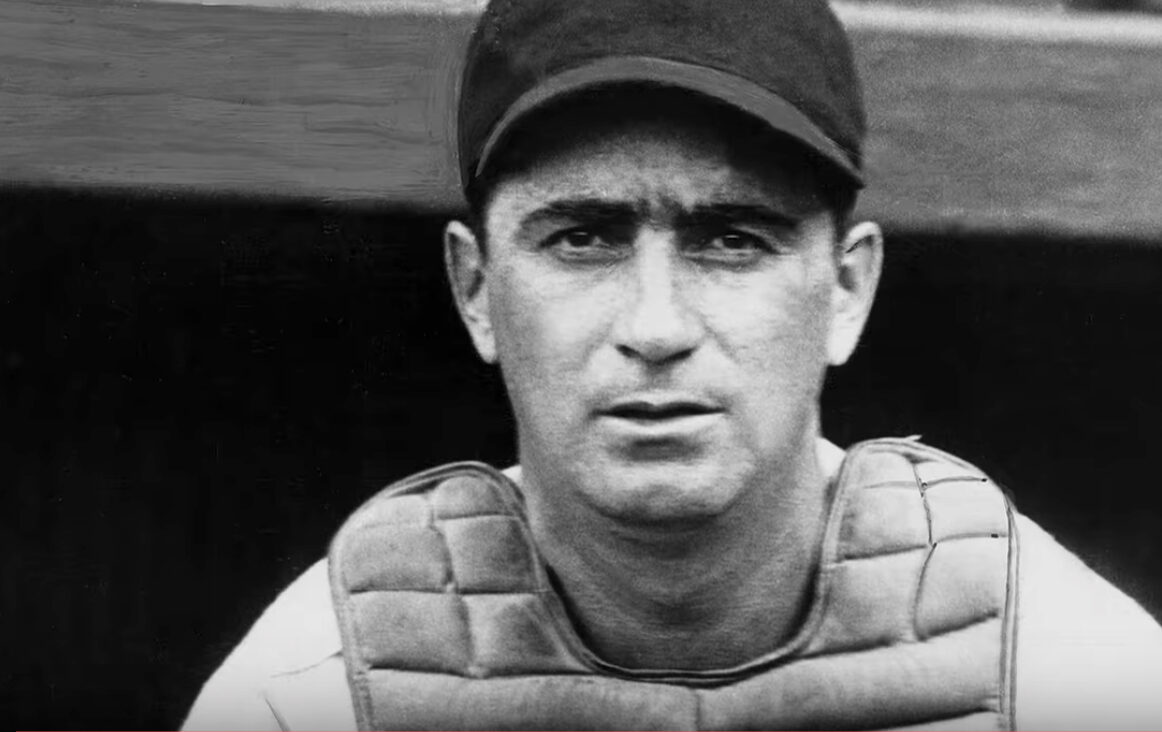 The film director’s origin story sounds like a Hollywood pitch on its own: An American baby is born in post-World War II Berlin to a Holocaust survivor and an American G.I. She grows up in thriving, mid-century Detroit, where she frequents Briggs Stadium and develops an unlikely obsession with baseball and little-known Jewish heroes. She earns a degree in psychology, completes a master’s in urban planning, and graduates law school – before drastically shifting course and becoming a documentary filmmaker.

The Spy Behind Home Plate hit theaters May 24.

“I don’t do well on multiple choice exams,” she says, alluding to the failed Washington, D.C., bar exam that inspired her to change careers.

Today, storyteller Aviva Kempner, BA ’69/MUP ’71, is an award-winning artist who has made a career out of celebrating obscure Jewish figures – including athletes, entertainers, and philanthropists. Her films include The Life and Times of Hank Greenberg (2000), about America’s first Jewish baseball star; Yoo Hoo, Mrs. Goldberg (2009) about media pioneer Gertrude Berg who created the first TV sitcom; The Partisan of Vilna (1986), about the Jewish resistance in World War II; and Rosenwald (2015), about the wealthy Sears philanthropist who built 5,000 schools for African-American children in the Jim Crow South

“So many American heroes never get the thanks they deserved during their lifetime,” Kempner says from her Washington, D.C.-based Ciesla Foundation. (Her home production office, in the basement of a traditional colonial, sits directly behind the one-time residence of former FBI director J. Edgar Hoover.)

In May, Kempner released her latest one-of-a-kind story, The Spy Behind Home Plate. The movie tells the true tale of catcher and American patriot Moe Berg, nicknamed “the brainiest guy in baseball.” The gloveman played for several teams between 1923-39, most notably the Brooklyn Dodgers and the Boston Red Sox. He also held a law degree, spoke multiple languages, and worked for a time on Wall Street between seasons.

But it’s his career after baseball that captivated Kempner. In 1943, Berg joined the U.S. government’s nascent wartime intelligence service, the Office of Secret Services (OSS). This was the predecessor of the Central Intelligence Agency. Before long, the polymath patriot, ballplayer, attorney, and linguist would prove to be an MVP of espionage, interviewing prominent Italian physicists who had inside knowledge of Hitler’s atom bomb program.

“The players loved Moe,” Kempner says. “The fans loved Moe. But it’s what he did out of the limelight that helped us defeat Hitler at a critical moment in history. That was his biggest hit: a grand slam for America.”

Kempner’s film about Berg showcases many of the hallmarks that characterize her well-researched documentaries: a self-effacing hero, quick-cut interviews that push the narrative pacing, and unique, archival footage.

In fact, Kempner was blessed to gain access to 18 unseen interviews stored in a Princeton University archive. The footage had long ago been recorded for an unproduced film on Berg. Kempner uses the clips to great effect and offers a fascinating look at this athlete who spoke several languages and wrote a classic Atlantic essay on the catcher/pitcher pas de deux. 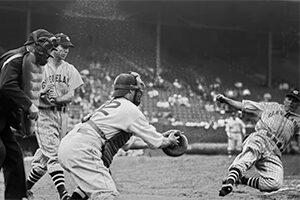 Inexplicably, Berg’s father never attended a single one of his professional ball games. (Image: The Spy Behind Home Plate.)

Humor is central to much of the work coming from this writer/director/producer. In one sequence, Kempner reveals how Berg, as a catcher playing for Princeton in 1919 (no easy feat for a Jew), gave audible signals to his pitchers in Latin. When asked to describe his plan B, should the opposition decode his calls, the catcher answered, “We’ll switch to Sanskrit.”

The Spy Behind Home Plate also features home-movie footage shot by players on a 1934 All-Star exhibition tour to Japan. The traveling party included Babe Ruth (Berg was entranced by his niece), Lefty Gomez, and Lou Gehrig. Berg’s personal footage, shot secretly from the roof of a Tokyo hospital, may have proved valuable to the American Air Force when planning World War II bombing raids. 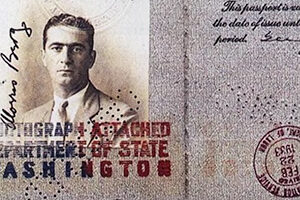 Berg was a highly valued undercover agent for the OSS. (Image: The Spy Behind Home Plate.)

Kempner’s interviews with contemporary figures focus closely on Berg’s post-MLB profile as an OSS spy. Convinced that physicist Werner Heisenberg was central to the German atomic bomb program, the OSS assigned Berg to attend one of his lectures in Zurich, armed with a gun to assassinate him on the spot. Wild Bill Donovan’s OSS also gave Berg a cyanide capsule to swallow if he was captured.

After speaking to the German scientist, the multilingual undercover agent was convinced Hitler was nowhere near building an atom bomb.

“Ironically, by forcing many prominent German Jewish scientists out of the country, the Nazis slowed down their attempt to build nuclear weapons,” Kempner says.

This vital intelligence was critical to America’s top-secret Manhattan Project that produced the nuclear weapons the U.S. used to attack Hiroshima and Nagasaki. (In a strange coincidence, Berg’s brother, Sam, was assigned by the Army to assess the impact of fallout from the Hiroshima bombing.)

Kempner will bring The Spy Behind Home Plate to the Michigan Theater for a screening on June 22 at 7 p.m.
Prodigious research informs Kempner’s films, which are released in theaters and on DVD, but are not streamed. Hours of fascinating extra material makes the DVDs ideal for classrooms with the support of funding from the Ford Foundation, the Foundation for Jewish Culture, personal donors, and more. All of Kempner’s films play at a wide array of alternate venues including churches, synagogues, community centers, and museums.

Kempner founded her production company, the Ciesla Foundation (a 501C-3 nonprofit), in 1979. Her films have received numerous awards, including top honors from the National Society of Film Critics, the New York Film Critics Circle, the Broadcast Film Critics Association and the CINE Golden Eagle Award. In addition, Kempner is a founder of Washington, D.C.’s Jewish Film Festival, and her home serves as a salon where she hosts author events, screenings, and fundraisers. It’s a tradition dating back to her Ann Arbor days in which her first attempt at philanthropy was a benefit for welfare mothers. Buddy Guy headlined that memorable event.

Kempner, who earned some of her U-M tuition selling movie theater tickets, also spent her student years in the late ’60s as a reporter at the Michigan Daily. She points to that experience as ideal preparation for sourcing and tackling complex subjects — and breaking through the inevitable obstacles confronting independent filmmakers.

“Investigative reporting in Ann Arbor taught me how to create a story that uncovers the unknown, something I love to do,” Kempner says.

The Spy Behind Home Plate, inspired and financed by executive producer William Levine, opened in theaters nationwide in late May. For tour dates visit thespybehindhomeplate.org.