On May 23, 1871, halfway across the U.S. from its Broadway home, Van Amburgh and Company’s Menagerie & Circus raised its tents in Ann Arbor.

Given the choice between Latin and Greek in the classroom and lions and tigers downtown, 60-some U-M students — most of them sophomores, class of 1873 — bolted the campus for the afternoon.

Once inside Van Amburgh’s big tent, one of them remembered, “we became the larger part of the show,” and they were tossed out for rowdyism. Bent on revenge, several of them snuck back inside before the evening performance to fiddle with the supports under the bleachers. When a new crowd got seated, the stands collapsed.

That touched off a minor riot in downtown Ann Arbor. When it was all over, anyone who had skipped classes that day was suspended until the following fall. By then the class of 1873 had dropped by a significant margin, thanks to parents who’d heard the full tale of the circus riot.

That was an early and infamous moment in U-M’s long relations with circuses, an occasional feature of campus life from the Civil War down through World War II.

“The circus is coming!” 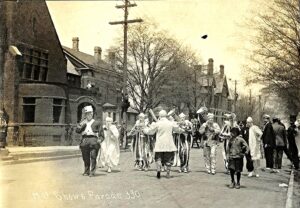 Clowns with horns promote the Michigan Union Circus of 1909. What could be better? (Image: Wystan Stevens Flickr.)

In the age before the motion picture, hardly anyone could resist the cry of a circus barker — especially in quiet, out-of-the-way towns like Ann Arbor, where there was nothing much to arouse public excitement besides sporting events. The circus gave Americans their one reliable source of the exotic, the unusual, and the weird.

Year by year, as the fast-spreading railroads made it possible to move performers and animals long distances, the traveling circus became the nation’s most popular species of public entertainment. (It was at least as popular in Europe.) Barnum and Bailey’s “Greatest Show on Earth” was only the most famous of many traveling circus troupes. And ambitious locals could always get up their own versions. 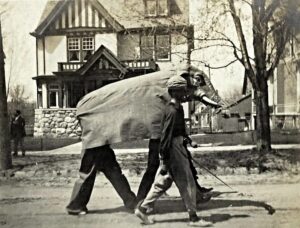 Mostly it was smaller companies that made stops in Ann Arbor — outfits like the now-forgotten one-ring Curtis & Ogawa Japanese Circus, which performed “feats of balancing, fencing, tumbling, juggling, and top spinning” at the corner of Washington and Ingalls in 1895 (roughly where the Burton Memorial Tower is today).

In the early 1900s, the Ringling Brothers Circus gave its one and apparently only local show. When U-M students tossed firecrackers in the path of the elephants on parade, setting off a minor stampede, the Ringlings declared Ann Arbor off-limits, and the other major companies, too, stayed away for years.

That set the stage for U-M students to mount a three-ring extravaganza of their own.

In 1909, the leaders of the Michigan Union —  the largest organization of male students on campus — conjured up a spectacular plan to raise money. They would put on a three-ring, Barnum-and-Bailey-style circus. It was to be a pro-am operation. Student volunteers would do much of the clowning, contorting, and parading. But real-life troupers from the big-time shows would be hired to provide genuine circus thrills. 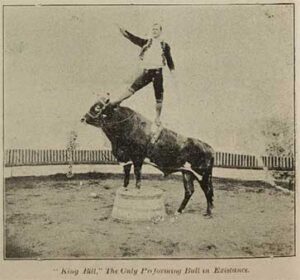 King Bill was “the only performing bull in existence” — and he came to Ann Arbor in 1909. (Image: Michigan Daily Archive.)

For the main event, the Union reserved a big vacant lot facing Ferry Field and made plans to erect a genuine big-top circus tent longer than a football field, with seats for 5,000 spectators. The United States Tent and Awning Company of Chicago supplied the canvas and seating — with insurance against fire, storm, or hurricane. The event was scheduled for Friday, May 7, and Saturday, May 8.

The entire local populace, from young to old, was invited to watch the circus parade on Saturday morning with floats, performers on horseback, acrobats, clowns, “a monstrous calliope,” four bands, and a menagerie of strange animals —  most of them capering students in costume — including bears, elephants, lions, monkeys, tigers, giraffes, leopards, and camels. The route from Ferry Field was north on State to Liberty, west to Main, north to Huron, east to State and back to the circus grounds.

Under the “big top,” the crowd would see a Wild West show with a staged bank hold-up; acrobats on horses; shooting tricks and pony races; a high-wire act performed by a student volunteer; another student diving into a four-foot-deep tub of water; tumblers and contortionists; and a professional daredevil on the back of King Bill, “the only performing bull in existence.” 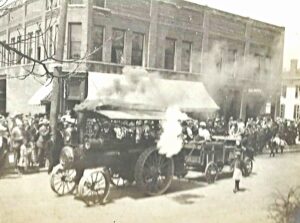 People lined State Street to watch this smoking steam engine roll by in the 1909 parade. The building here stood at the northwest corner of S. State St. and East Liberty. It burned down in 1954. (Image: Wystan Stevens Flickr.)

Not to be outdone, “eight trained sea lions, engaged from a professional syndicate . . . will juggle blazing torches and huge inflatable balls.” And “a charmingly pretty girl in pink tights” would “ascend to the topmost pinnacle of the center pole,” then, “suspended only by her pretty white teeth, [slide] swiftly down a taut wire to the ground.”

In sideshow tents the customary attractions would tickle midwestern curiosity, from “Russian dancers” and “fancy dancers of unusual art and agility” (including one Madame Zangara, a specialist in the not-so-biblical “dance of the seven veils”) to “freaks of the most inconceivable types.”

For a big downtown concert, the Union booked the U-M Men’s Glee Club and a couple of student comedians. A talented sophomore named J. Fred Lawton (who would gain maize-and-blue glory two years later as the composer of “Varsity”) agreed to perform “Scottish song and dance stunts.” A vaudeville show would be staged in the Whitney Theater at the corner of Main and Ann streets.

Three shows under the big top were scheduled — two on Friday, one on Saturday. When advance-ticket sales started at a booth on State Street, the line stretched around the corner.

A twisted mass of canvas 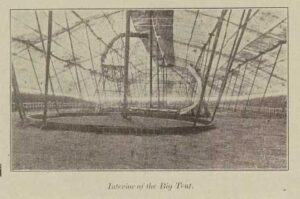 The Big Tent had a capacity of 5,000 people. (Image: Michigan Daily Archive.)

The Union had called for 500 student volunteers to help raise the big top. On Thursday night the operation got underway. Then, when the canvas was half-raised, a fierce wind kicked up. The tent pulled out of the handlers’ hands and was badly torn. At dawn on Friday morning, the big top was “a twisted mass of canvas and tent poles.”

But it wasn’t the first circus tent blown down by a storm, and the circus men knew their business. The Friday night show was rescheduled to Saturday night and the times of other performances were adjusted. With help from student volunteers, the big top was repaired and resurrected.

As the workers scrambled, a reporter from The Michigan Daily asked one of the circus pros if the Saturday show would come off all right.

She replied: “Why, this is the University of Michigan. You fellows up here have the reputation of doing whatever you set out to do . . . There’ll be more fun here tomorrow than you fellows have any notion of. Just wait till we get started.”

Under the restored canvas there was plenty of the promised fun, for sure. But a gloomy drizzle kept much of the expected crowds at home. Paid attendance at the Saturday afternoon show was 1,980. But that night, only 574 tickets were sold.

It was a good thing the Union’s leaders had taken out that insurance on the tent. That kept their losses under $500.