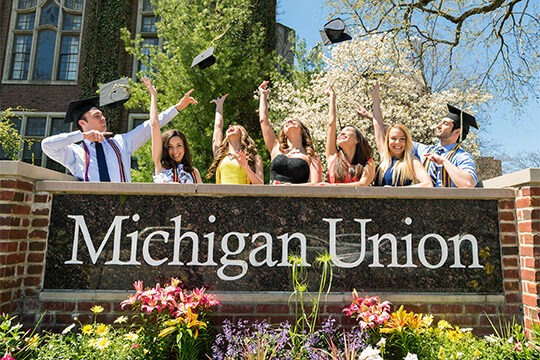 Ten years after earning a bachelor’s degree from the University of Michigan, more graduates work in professional, scientific and technical service fields than any other classification.

The data were released today through an agreement between U-M and the Institute for Research on Innovation and Science. IRIS partners with the U.S. Census Bureau to link data from participating universities to the Census Bureau’s Longitudinal Employer-Household Dynamics dataset to produce detailed employment and geographical information on alumni. The data covered 2001-15.

U-M has publicly released data on the industries in which their graduates work. For bachelor’s degree graduates (across all fields and years), the top industries for employment 10 years after graduation were:

The data show, for all fields of study and all degree levels, the employment industry and location of graduates one, five and 10 years after graduation.

IRIS executive director Jason Owen-Smith, a U-M professor of sociology, says the data are important not only for students and their families, but for researchers studying the value of higher education. For example, the data reveal which fields of study and degree levels produce the highest numbers of graduates who stay in Michigan to pursue their careers.

“Releasing this data publicly will help students and families, as well as researchers from a number of fields, better understand the value of higher education for society,” he says. “IRIS member institutions, employers and the nation as a whole will ultimately benefit from improved knowledge of public higher education.”

The numbers change somewhat depending on a graduate’s major and level of education.

After five years, 47 percent of graduates were in the Midwest, 15 percent were in Mid-Atlantic states, 10 percent in the South Atlantic region and 14 percent in the West.

The shift after 10 years had 44 percent of U-M graduates in the Midwest, 14 percent in Mid-Atlantic, 10 percent in South Atlantic and 16 percent in the West.

“U-M students at all levels and across all fields move from their academic careers to jobs spanning the spectrum of industry and locations,” Owen-Smith says. “Michigan serves as a hub for a vibrant alumni community that works all over the economy and the nation.”

Highest percentage of students living in Michigan after one year