A communist on campus

“To hold America in one’s thoughts is like holding a love letter in one’s hand — it has so special a meaning.” — E.B. White

What does it mean to love America?

The journalist-historian David Maraniss, author of bestselling biographies of Bill Clinton, Vince Lombardi, Roberto Clemente, and Barack Obama, had been thinking about the question for years.

It held particular poignancy in his family, even had caused pain and suffering.

Maraniss and his siblings had grown up with the shadowy knowledge that in years long past, their parents — both Michigan graduates — had been publicly damned for their associations with the Communist Party of the United States. 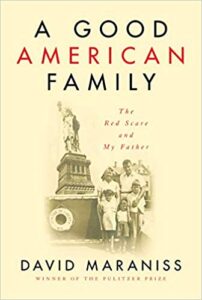 The Maraniss children knew next to nothing about the details, only that their father, Elliott Maraniss, had lost his newspaper job in Detroit in 1952 when the U.S. House Un-American Activities Committee (HUAC) listed him as a target of their investigations.

After years on the newspaper industry’s blacklist, the senior Maraniss recovered his good name and enjoyed a distinguished career. He retired in 1983 as editor of the muckraking Capital Times in Madison, Wis. — “a haven for the gifted eccentric,” he once called the newspaper — and died in 2004. His wife, Mary, a book editor at the University of Wisconsin Press, died in 2006.

But they never told their children exactly what had happened to them when they were young, and the children had never quite summoned the courage to ask.

So David Maraniss decided to apply his skills as a biographer to his parents. He had grown up in what he had known to be “a good American family,” to use the title of the book that resulted. Yet his parents had once been called un-American, and he wanted to find out why.

He began with a request for his father’s FBI file. While he waited — for many months — he studied the transcripts of HUAC’s hearings in Detroit in 1952. He also filled in the details of his father’s early years.

Born in 1918, Elliott Maraniss spent his adolescence in Brooklyn during the worst years of the Great Depression. The son of Jewish immigrants, he was an avid Boy Scout who went to Abraham Lincoln High School, an outpost of progressive education. The principal urged students to become engaged, idealistic citizens in a world threatened by fascism, Nazism, and what appeared to be an endless depression.

For progressive students in the mid-’30s, the overriding challenge was to prevent a second plunge into world war. That imperative became entwined with an attraction to Communism, which promised an egalitarian future free of the manifest ills of capitalism, and to faraway Soviet Russia, where the Marxist experiment was being carried out behind curtains of secrecy and propaganda.

Then came the civil war in Spain, with democratic-socialists defending the republican government — and aided by the Soviets — against the fascist rebels of Francisco Franco, who were backed by Nazi Germany.

All these issues permeated the air as Elliott Maraniss enrolled at U-M and joined The Michigan Daily. In time he became director of the editorial page. In dozens of columns, he would lay bare his early thinking for his son to ponder many years later. 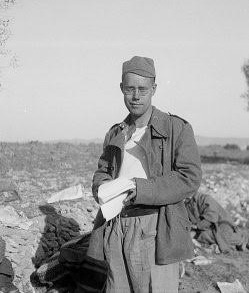 Mary Cummins had grown up in Ann Arbor idolizing an adored older brother, Bob. He was a slightly-built fledgling writer who, at U-M, joined the staff of the Daily a couple years before Elliott Maraniss. At the Daily, a friend recalled, he won admirers by his passionate advocacy for the left and “a strange, amusing personality he exhibited only after too much beer.”

Cummins left the U.S. for Spain, where he joined American progressives fighting alongside republican loyalists against Franco’s fascists. He went with a friend, Ralph Neafus, who would be executed by Franco’s fascists.

Stan Swinton, a Daily editor who would become a foreign correspondent and a leader of the Associated Press, later wrote: “Both Ralph and Bob rather thought they were communists. Neither was sure. But their adherence to the great American bogey [Communism] was a minor matter in influencing their decision. They were fighting for democracy.”

Mary Cummins followed her brother to U-M. She, too, embraced radical ideology. When her brother came home from Spain to a hero’s reception, Elliott Maraniss covered the event as a Daily reporter. There he and Mary met. They fell in love.

“The Daily was his classroom”

At U-M Elliott Maraniss went by the nickname “Ace.” He was a classic “big man on campus,” selected for the honorary societies Sphinx and Michigamua.

He was also well known to be a radical. A cartoon portrait of the Daily‘s leaders published in 1940 in the Gargoyle, U-M’s on-and-off student humor magazine, cast him as a glowering bomb-tosser.

But his intellectual journey was anything but cartoonish. Studying the Daily‘s digital archives, David Maraniss found a young mind engaged in an earnest debate over life-and-death matters.

“I think the Daily was his classroom,” the writer said in an interview. “The faculty was great then, but the Daily was really the heart of what he was learning at Michigan.

“I was floored by the intellectual depth of the Daily in that period. Everything about it was very sophisticated, and you could see a collegial argument going on within the paper that was really extraordinary.” 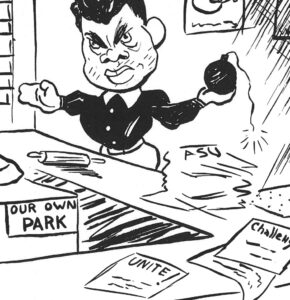 A January 1940 cartoon in the campus magazine, The Gargyole, cast Maraniss as a glowering bomb-tosser. (Image: Bentley Historical Library. See the entire image.)

In A Good American Family: The Red Scare and My Father, Maraniss writes:

“I accept that I will never know my father’s internal thoughts during that period of his life. I can only work with what he left behind” — some 150 editorials and reviews in the Daily. Distraught over the injustices and horrors of the 20th-century world, he reached for a systematic explanation of what happened and the best way to create something better … his approach alternating between a newspaperman’s keen realism and a romantic idealist’s yearning for perfection. Yet at the core, always, was a deep belief in America and an American ideal.”

At the same time, his son concedes, Elliott turned a blind eye to Joseph Stalin’s brutal rule in the Soviet Union and the “show trials” by which he liquidated enemies and allies alike.

“I have a hard time imagining how he could absorb the facts and still ascribe positive intentions to the Soviet version of communism,” the author writes. “Decades later he broached the subject of his mindset during that period without being specific, describing himself at Michigan as ‘stubborn in my ignorance and aggressive in my prejudices.’ An honest yet gentle self-appraisal.”

His parents on the eve of World War II “loved the promise of America, were disoriented by the economic collapse of the U.S. economy during the Depression, were seeking answers to the chaos of the world, and at the same time wanted to believe in a virtuous, peace-seeking, equality-minded Soviet Union. They thought they were working toward a true and open American democracy even as they were rationalizing the actions of what was, in fact, a ruthlessly totalitarian foreign power. Two opposing ideas, one noble, the other false and naive, coexisted in their minds.”

“I was taught as a child and in school that the highest responsibility of citizenship is to defend the principles of the U.S. Constitution and to do my part in securing for the American people the blessings of peace, economic well-being, and freedom.” — Elliott Maraniss
A Good American Family goes on to recount Elliott’s service in World War II and the Maranisses’ lives after the war, when they settled in Detroit and started a family. Elliot went to work as an editor at the Detroit Times, owned by the conservative Hearst chain. In their spare time, both he and Mary worked for Communist organizations.

When HUAC’s informers put out a list of Detroit-area Communists to be quizzed at a committee hearing — including Elliott Maraniss and his brother-in-law Robert Cummins — the Detroit Times fired Elliott the same day.

At the hearing, HUAC denied Maraniss’ request to read aloud a prepared statement in defense of his refusal to discuss his beliefs with the committee or to name other Communists. But his son found the document in the committee’s files.

Defiant and eloquent, never denying his radicalism, it is Elliott’s testament of what he thought it meant to love America.

“I was taught as a child and in school that the highest responsibility of citizenship is to defend the principles of the U.S. Constitution and to do my part in securing for the American people the blessings of peace, economic well-being, and freedom. I have tried to do just that to the very best of my ability … My Americanism has been questioned and to properly measure a man’s Americanism you must know the whole pattern of a life …

“The U.S. Constitution and its Bill of Rights are not simply musty documents in a library. They have meaning only if they are used … Every newspaperman knows that history is not a printed page. It is the passion and striving, the struggling and endurance of men and women. These qualities that went into the making of our nation can be discarded only at great peril to ourselves and our children.”