A cloud lined in platinum 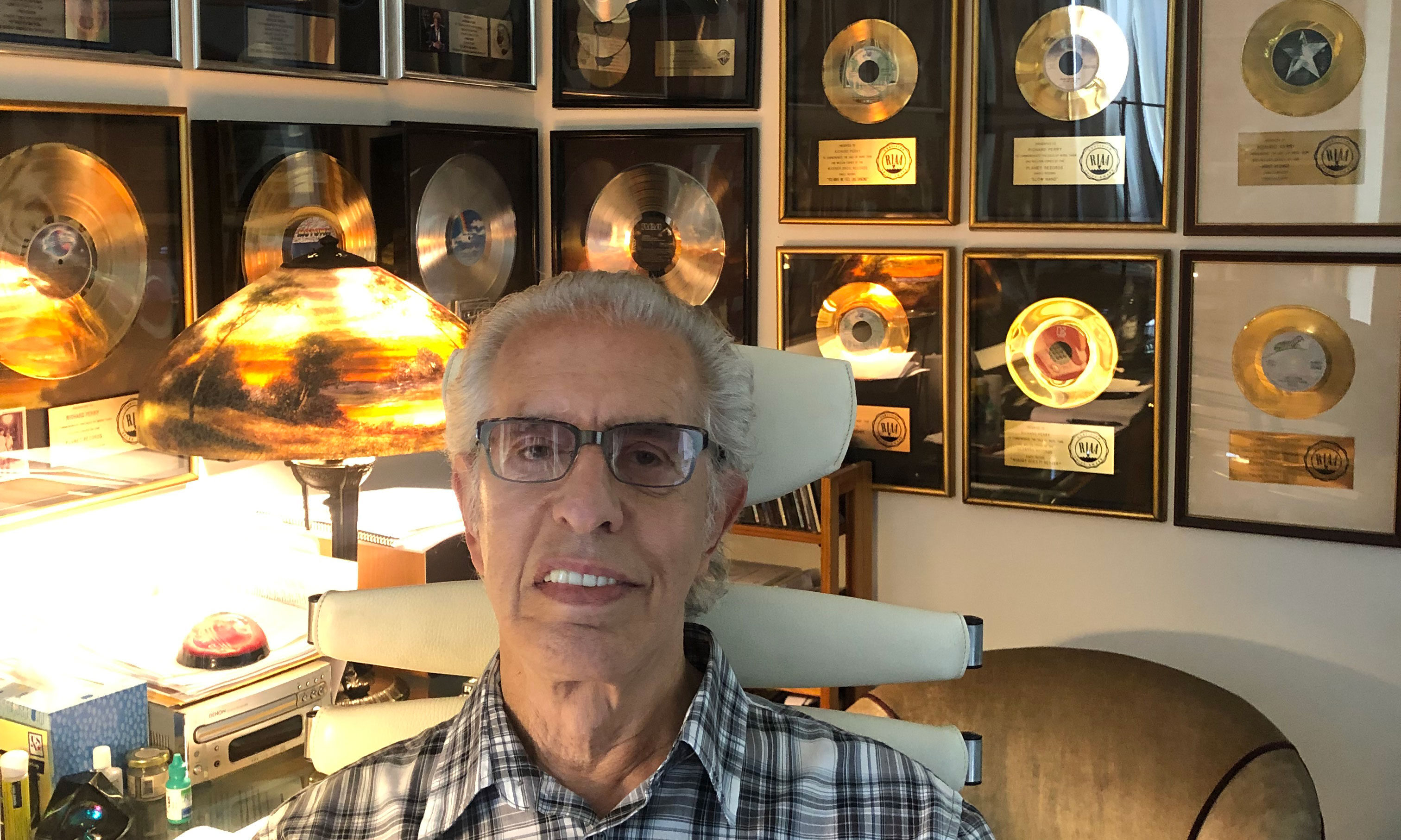 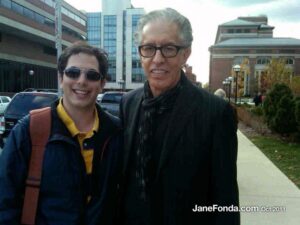 The out-of-state student was majoring in performing-arts technology, thanks to the Richard Perry Music Scholarship. And when Perry accepted an invitation to speak on campus during Homecoming 2011, Goulston marked his calendar.

“I’d written a letter to Mr. Perry thanking him for his generosity earlier that fall,” Goulston says. And then he received a delightful surprise. The School of Music, Theatre & Dance invited him to meet Perry and his partner at the time, actress Jane Fonda, before their presentation at Rackham Auditorium.

“We talked for nearly a half hour, and I told them about the research and recording projects I was working on,” he says. “They were very nice people.”

On stage, Perry and Fonda discussed their careers in the film, television, and recording industries, as well as the performing arts.

“The main takeaway was to be open and flexible and to look for different opportunities,” Goulston says. “The music industry is tough enough as it is, so being able to work back and forth across a number of different areas is valuable.”

Perry displayed that versatility as a record producer from the onset of his career. He formed the independent production company Cloud Nine Productions in June 1965, a year after graduating from Michigan. Two years later, he moved to Los Angeles where he produced his first album, Safe as Milk, by Captain Beefheart and His Magic Band. In November 1967, he landed his dream job as a staff producer at Warner Bros. Records, where he scored his first hit album, God Bless Tiny Tim.

“Looking back, I see a lot of parallels between what I now do for a living and what Mr. Perry has been doing for his entire career,” says Goulston, who plays the trumpet, sings baritone, and performed as a student with the Michigan Men’s Glee Club. “He has taken a very interdisciplinary approach to music and has been involved in many different aspects of the music industry.”

Goulston currently is an audiovisual design consultant in the Chicago office of Shen Milsom & Wilke and has done design work for AV projects around the world. His production coursework and student experience as a recording engineer set him up for success, he says. 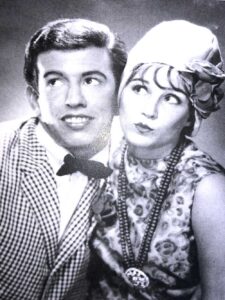 Born and raised in Brooklyn, Perry got hooked on rock music at a young age and began performing locally as a teenager. But when it came to college, he left the Big Apple and headed west to Ann Arbor.

“There are many fine schools in the New York area, but originally I was going to major in music, and music has always been at the forefront of Michigan,” Perry explains. “U-M also has a good theater department, so I wound up majoring in music and theater.”

He played the oboe in the Symphony Band, the Concert Band, and numerous ensembles, but never joined the Michigan Marching Band. “That’s where I drew the line,” he says with a chuckle.

Perry sang bass, performed with the Michigan Men’s Glee Club, and landed leading roles in student-run MUSKET musical-theater productions. He often zipped around campus on his motor scooter. His classmates remember him as a multitalented musician who was a “gonnabe” rather than a “wannabe.”

Perry says Michigan prepared him for his producing career on many levels.

“I studied conducting with Professor Elizabeth Green for a year, and that experience came in extremely handy,” he says. “I wound up conducting for several of my artists, culminating with conducting the National Concert Orchestra for Tiny Tim at Royal Albert Hall in London. That was quite an event.” A recording of the 1968 performance was released by Rhino Records in 2000.

“Michigan gave me complete musical knowledge and the ability to write musical arrangements,” Perry says. “There were several times when a record required a horn arrangement, and because of my training, I was able to do that.”

In 1975, U-M honored Perry with an Outstanding Achievement Award. Shortly afterward, he endowed the Richard Perry Music Scholarship, which goes annually to a musical-theater or music major. “I wanted to give something to the school, and it seemed like a good thing to do,” he says. 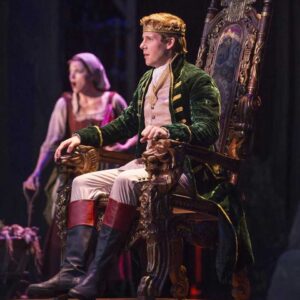 For many talented students, the Perry Scholarship has been a springboard to success.

“Being a Broadway performer has been a lifelong dream,” says Andy Huntington Jones, BFA ’11, who grew up near Boston. “I knew I wanted to go to the University of Michigan, but that would not have been possible without the Perry Scholarship. Walking into an audition room with the stamp of Michigan on my resume really got me into a lot of doors.”

Jones describes his training at U-M as “conservatory-like.”

“Brent Wagner, who was then chair of the Department of Musical Theatre, focused on nurturing individual talent and performers rather than teaching cookie-cutter skill sets,” he says.

Jones, who is a lyric baritone, performed in student musicals at the Power Center and the Lydia Mendelssohn Theatre, and made his Broadway debut in 2013 with the original cast of Rogers and Hammerstein’s Cinderella. He was the understudy for Prince Topher in the Broadway production, and originated the role of Prince Topher on the show’s first national tour. He went on to perform in Broadway productions of Bullets over Broadway (2014) and Cats (2016), and played the character Riff in an international touring production of West Side Story. Currently, Jones is on a national tour of The Book of Mormon as Elder McKinley.

“Life as a Broadway performer is intimately tied to life as a Wolverine,” Jones says. “The lineage is strong.” 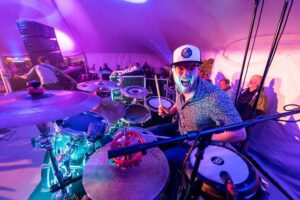 Fritz McGirr, BMus ’10, is the drummer for the band Scythian. (Image courtesy of McGirr.)

“I grew up in Michigan and knew I wanted to study percussion,” says McGirr, who is based in Massachusetts. As a high school senior, he auditioned with Professor Michael Udow, the head of U-M’s Percussion Department.

“I had an absolutely wonderful experience at the audition, and Professor Udow accepted me on the spot for the fall 2006 term,” McGirr says. “The Perry Scholarship allowed me to graduate from college free from debt. Going into the music industry, it gave me a huge jump-start and enabled me to hit the ground running.”

Before joining Scythian in 2016, McGirr toured for eight years with the Celtic-influenced trio, Moxie Strings.

“Musicians I’ve never played with before often comment on how easy it is to communicate with me on stage and how well I can sit back and accompany the rest of the music.” He attributes that skill directly to his training at U-M.

But it wasn’t until after graduation that McGirr realized how much he had in common with his benefactor.

“It was inspirational to discover he was into rock and roll, jazz, and pop and didn’t stick to just one music genre,” McGirr says. “That is the same direction my personal playing took when I moved away from orchestral music and into live stage performance.” 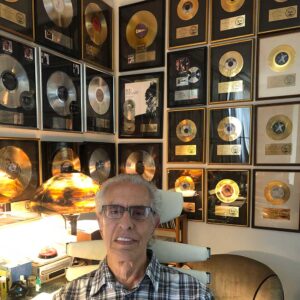 Does he still follow Michigan football and basketball? “You better believe it!” Perry says.(Image courtesy of Richard Perry.)

Perry’s legacy, spanning nearly five decades, is unparalleled in the American music industry. The recordings he produced for pop-music artists not only catapulted many performers to stardom but also filled the nation’s airwaves, playlists, stages, theaters, and homes with songs that have stood the test of time.

Who can forget Carly Simon’s “You’re So Vain” and “Nobody Does It Better” (the theme song for the James Bond film, The Spy Who Loved Me)? Or Art Garfunkel’s “I Only Have Eyes For You.” Or Julio Iglesias and Willie Nelson’s “To All the Girls I’ve Loved Before.”

Perry has a hard time pinpointing highlights in a career bathed in such gold- and platinum-certified success.

“I worked with all of the Beatles and did two albums with Ringo Starr,” he says.

But he also cites Rod Stewart’s album It Had to be You: The Great American Songbook, which includes some of the most popular standards ever written by George & Ira Gershwin, Cole Porter, and more. When the production required a conductor for the 25-piece orchestra accompanying Stewart live on A&E’s “In Concert,” Perry volunteered.

“I suddenly realized that I could do it,” he says. “It was quite an event.” The project became the Grammy Award-winning Great American Songbook series, which has sold more than 17 million copies worldwide.

“The entire record business has changed ─ and not for the better,” says Perry, now 77. “We could spend a great deal of time talking about that. The best advice I can give a student who wants to go into the music industry is to always remember the importance of the song ─ the song is the king. The lyrics and melody are equally important. If you don’t have a great song, you’ve got a tough road to climb.”

Perry says he loves all music, but recently has developed a fondness for Brazilian songs. He is putting the finishing touches on his new book, Cloud Nine: Memoirs of a Record Producer, which he anticipates will be out in spring 2020.