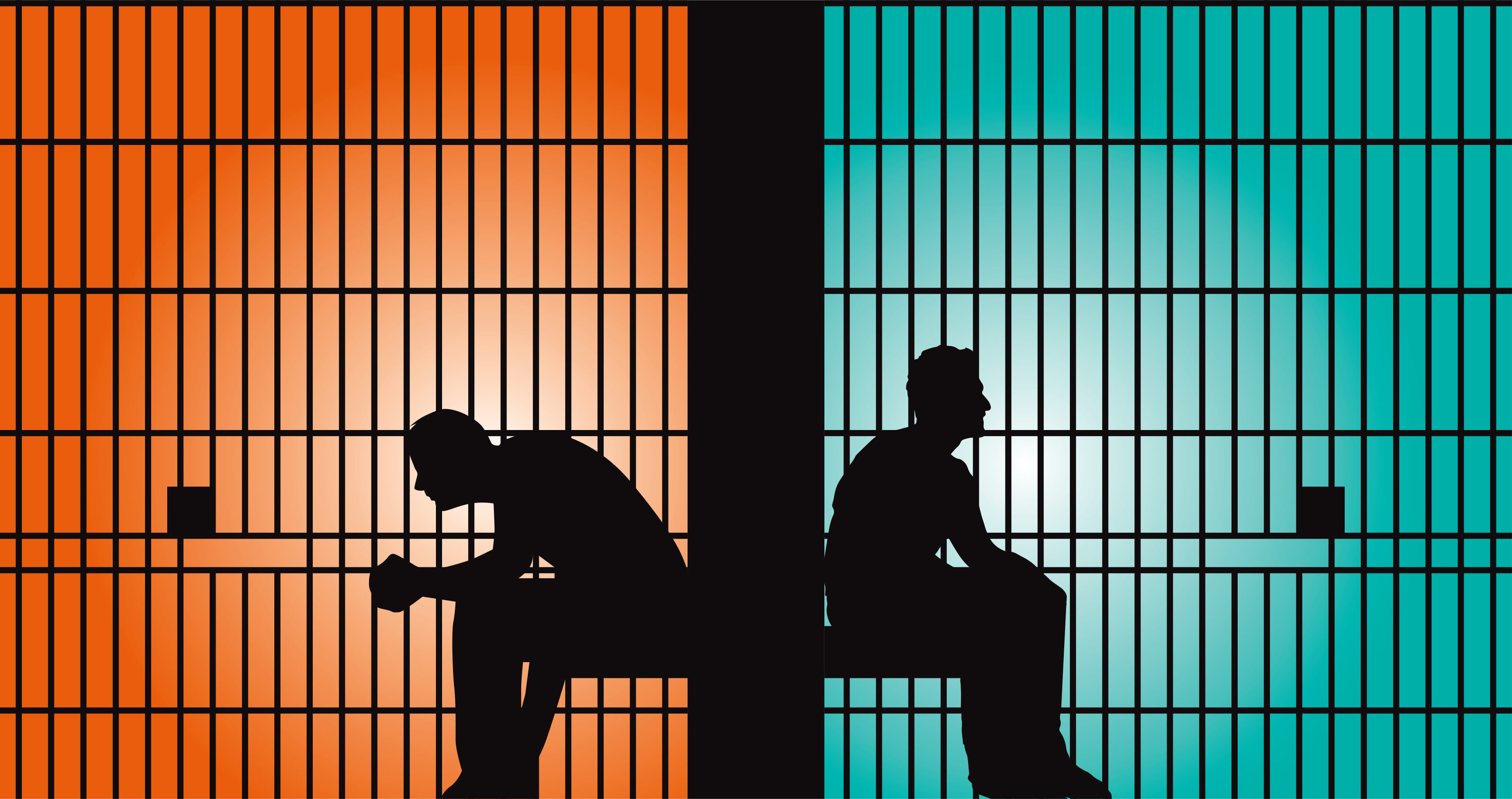 Two rats in a jail

Two bank robbers happen to meet. They decide to pull a job together.

The cops nab them, but without enough evidence to convict. They need a confession. And they know both robbers are unlikely to talk, since if neither implicates the other, the cops can keep them in jail for only 30 days.

So they put the two in separate cells. They go to the first prisoner and say:

“If you rat on your partner and he stays mum, we’ll let you go and he’ll do ten years.”

“If you both rat on each other, you’ll both do eight years.”

Then they go to the second prisoner and say the same thing. 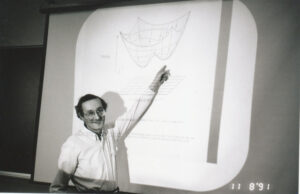 Axelrod in his early years at Michigan. He joined the faculty in 1974. (Image: Gerald R. Ford School of Public Policy.)

The first prisoner thinks it over.

So they rat on each other, and the cops get their two convictions.

If the prisoners had cooperated, both would have gotten off easy. Instead, the rational pursuit of self-interest has put them both in a world of pain. That is the Prisoner’s Dilemma. It is the most famous puzzle in the scientific field called game theory, the mathematical analysis of strategic interactions between rivals. The puzzle was invented in 1950 by two scientists at the RAND Corporation.

Robert Axelrod, professor in U-M’s Ford School of Public Policy and the Department of Political Science, encountered it as a young man in the 1960s.

He could scarcely have imagined how far his exploration of the Prisoner’s Dilemma would go.

Axelrod had been a very brainy youngster — so brainy that he was one of 40 students selected as the nation’s most promising future scientists in the Westinghouse Science Talent Search. (The winners met with President John F. Kennedy in 1961. Another winner that year was Axelrod’s future colleague at U-M, President Mary Sue Coleman.) 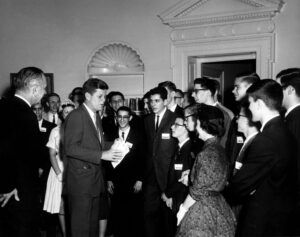 Robert Axelrod, a finalist in the Westinghouse Science Talent Search, with President John F. Kennedy in 1961. (Axelrod, with glasses, stands closest to Kennedy.) Mary Sue Coleman, who would become president of U-M, was another recipient on the same day. (Image: John F. Kennedy Presidential Library.)

As an undergraduate at the University of Chicago, he majored in mathematics. But in the fall of 1962, the Cuban Missile Crisis turned his attention to international relations.

It was crazy, he thought, that millions of lives hung on the calculations of two players on a global gameboard. Maybe he could use math to make some small contribution to a solution.

So he earned a Ph.D. in political science at Yale, and in 1974, after several years at the University of California at Berkeley, he joined the Michigan faculty.

The problem of conflict between powerful actors, whether in the cloakrooms of Capitol Hill or in the global Cold War, remained very much on his mind.

Were there conditions, he wondered, in which powerful rivals could move past mutual assured destruction toward mutual cooperation?

Could you crystallize those conditions in a mathematical model? Could you somehow weed out all the noisy factors of history and emotion to find insights on the choices that lead to peace or war?

That is the Prisoner’s Dilemma. It is the most famous puzzle in the scientific field called game theory, the mathematical analysis of strategic interactions between rivals.
Axelrod’s father had made his living as a commercial artist. In his spare time he painted watercolors of outdoor scenes. He told his son that his paintings were not like photographs. He wasn’t recording every visible detail. He was painting only what mattered to him in the scene, or how the scene affected him.

As he thinks back on it now, Axelrod said recently, he realizes that his own mathematical modeling of human behavior drew something from what his father said about painting. He isn’t trying to reproduce every factor in a complex interaction. He’s trying to model the things that matter most.

Yet as he read the writings of experts on the Prisoner’s Dilemma in graduate school, he had grown frustrated. “There was no clear answer to the question of how to avoid conflict, or even how an individual (or country) should play the game.”

After he got settled in Ann Arbor, as he was planning his next research projects, his mind returned to the problem. He remembered how, as a kid, he had fooled around with versions of checkers played on a computer. You could write programs to test strategies, then see which strategy was the best.

In 1977, the two ideas came together. He imagined a Prisoner’s Dilemma tournament waged by lines of computer code. Then he invited experts in game theory to submit their strategies.

Just maybe, he thought, some contestant would play the Prisoner’s Dilemma in a way that showed a path out of the trap of self-interest.

The scenario of the bank robbers is the Prisoner’s Dilemma in its pure form. It isn’t a game. It’s just a brain-teaser. 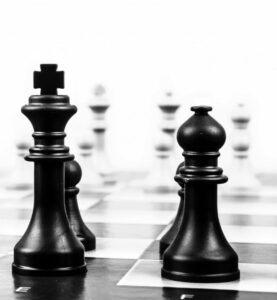 Computer chess was on Axelrod’s mind when he created the Prisoner’s Dilemma tournament. (Image: Stock.)

Game theorists wanted to do more with it, and they wanted something closer to the real world. In everyday life, from business to politics to diplomacy, selfish actors — “egoists,” in game-theory lingo — compete not just once but often. They get to know each other and act on that knowledge.

So the gamers began to play what they called the iterated (meaning repeated) prisoner’s dilemma. Here the match between the prisoners is staged again and again, like kids playing rock-paper-scissors.

You can’t communicate with the other guy. But you do learn their moves. So game by game, if you pay attention, you can try to figure out how they act and use that knowledge to your advantage.

So how do you win?

It’s not like chess, where it’s winner-take-all. In the iterated Prisoner’s Dilemma, as Axelrod writes, “the interests of the players are not in total conflict. Both players can do well by getting the reward for mutual cooperation or both can do poorly by getting the punishment for mutual defection… So unlike in chess, in the Prisoner’s Dilemma it is not safe to assume that the other player is always out to get you.

“In fact…the strategy that works best depends directly on what strategy the other player is using and, in particular, on whether this strategy leaves room for the development of mutual cooperation.”

He reached out to experts in game theory and the Prisoner’s Dilemma. He invited them to submit entries and explained the rules:

When it was over, each player’s total points would be tallied and a winner declared.

One by one, 14 entries arrived in Axelrod’s campus mailbox. They came from game-theory practitioners in psychology, economics, political science, mathematics and sociology.

He bundled them up and walked them over to the University Computer Center on North University.

He had to wait overnight while the entries were processed and the University’s mainframe chugged through its work.

The next day he went over to pick up the results. They came on a thick set of printouts — columns of figures representing all the points won and lost in all the various match-ups.

He did the tallies, stared at them, checked them. Then he sat back in some astonishment.