Meet me at Camp Davis 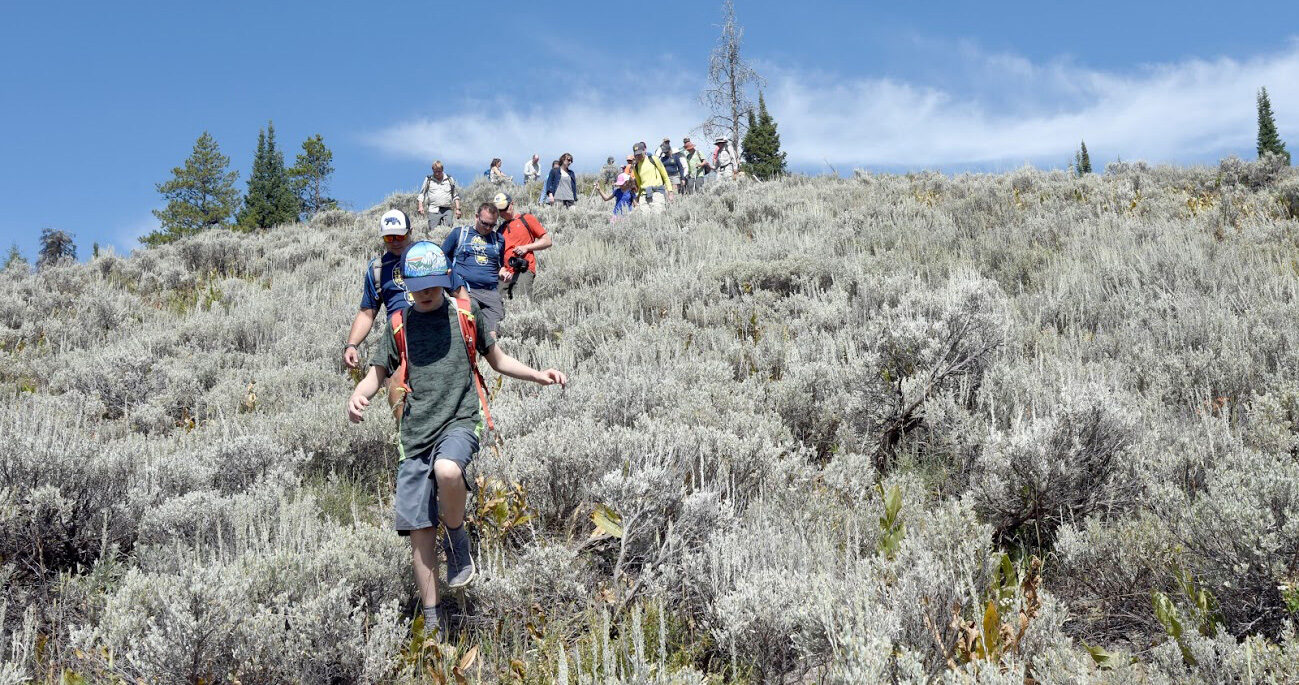 Oh joy! Another day to excel 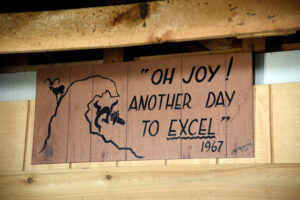 At 6,113 feet above sea level, the morning air is crisp at Camp Davis. Early risers rely on the August sun, not yet visible above the mountains, to light their path to the mess hall. A bald eagle’s screech echoes across Wyoming’s Hoback River Valley; the only other sound is the occasional rumble of a car on Highway 191. Eventually, the sun appears, gilding the camp buildings in a warm sheen. At the mess hall, hot coffee and a cheerful message set the tone for today’s campers:  “Oh Joy! Another Day to Excel.”

Those days to excel have been happening since 1929 at Camp Davis Rocky Mountain Field Station, operated by U-M’s Department of Earth and Environmental Sciences. Located within the Greater Yellowstone Ecosystem and nearby Grand Teton National Park, the camp opened in 1929. The scenic outdoor “classroom” offers myriad types of soil and plants, as well as alpine ecosystems and other natural features to observe and study. 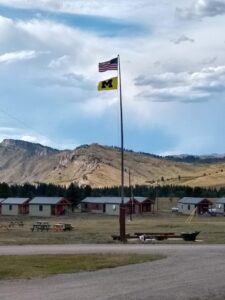 “It was just an incredibly eye-opening experience,” says John Geissman, BS ’73/MS ’76/ PhD ’80, of his original visit to Camp Davis in 1973. The memorable undergrad excursion marked the first time he had been west of the Mississippi. “To me, it represents a huge aspect of my life in the sense that I had the opportunity to interact with so many wonderful, intelligent, enthusiastic, fun-loving, and nature-loving individuals,” he says.

Geissman, a visiting professor of earth and environmental sciences, was one of several Camp Davis alumni who gathered in Wyoming this summer. Former campers celebrated the facility’s 90th anniversary, unveiled a new recreation hall, and dedicated fresh cabins (complete with heat and bathrooms). They attended geology lectures, hiked the mountains, and visited Grand Teton National Park. The alumni also enjoyed stargazing (with high-powered telescopes), whitewater rafting, and bonding around the campfire.

“It’s an ideal setting, and I think U-M should feel very fortunate to have it,” says Geissman.

He has returned to teach at Camp Davis every summer but one since 1974, beginning as a teaching assistant and evolving into an adjunct professor. In recognition of his commitment to the camp and the University, alumni and students affectionately but unofficially have dubbed the new recreation space “Geissman Hall.” 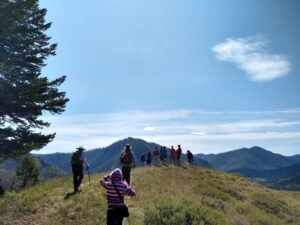 Camp alumna Cindy French, BS ’78, retired from Chevron Phillips Chemical in 2014. She started her career as a petroleum geologist. French still cherishes memories of the field trips she took in 1978. The reunion allowed her to revisit some of her favorites, including the Gros Ventre Slide. Her husband was able to join her this time.

“It reminded me of how fascinated I was by the impact of geological processes on people,” she says.

That impact is what makes Camp Davis so valuable to the University, says Kyger Lohmann, professor of earth and environmental sciences. He taught there from 1981-96.

“You can teach a tremendous amount in a classroom, but one cannot create the visual connection between what I would call the ‘concepts of geology’ and the ‘reality of geology,’ which would be the sediments, the rocks, the structures, the real world,” he says.

Studying the earth sciences in “the real world” had a transformative effect on English major Heather Foote, BA ’89. Before attending Camp Davis in 1986, she had mixed feelings about her science courses. 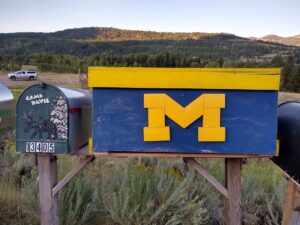 “Being able to experience geology firsthand — to see the differences and touch things — had a profound impact on me,” Foote says. She is now director of strategy at Northwestern Medicine in Lake Forest, Ill. “[I discovered] that I learned best by experience.”

The real-world location is just one feature that inspires such revelations, says Nathan Niemi, professor of earth and environmental sciences and camp director. The instructor-to-student ratio can be as small as one-to-six, he says. “It’s probably one of the most intimate teaching experiences the students have. They will get to know these faculty better than probably any other faculty they’ll ever meet, unless they do research with somebody on campus.” 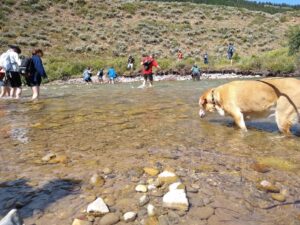 Like Foote, many Camp Davis alumni who did not pursue a career in the earth sciences say they still hark back to lessons learned in the field.

Finance executive Karr McCurdy, BS ’81, who attended Camp Davis in 1977, started his career as a geologist. Today he is a partner at Denver-based Rock Elm Capital Management.

“The geological sciences background was very relevant and germane to what I did in finance because I knew how to evaluate technical fundamentals of a project, which is typically where things are missed in an unsuccessful project.”

He says the recent upgrades to the camp – from wi-fi to washing machines – give students a competitive advantage he wishes his class enjoyed. 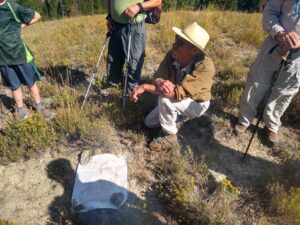 “The changes will help students focus more on what they’re learning in the earth sciences. They now have better access to technology and information while conducting fieldwork than we certainly had back in the day!”

But it’s not just the facilities that have changed over the years, says Geissman. During his nearly five decades teaching at Camp Davis, he has watched the landscape transform, observing “forests of trees that are fully standing yet completely dead, waiting to ignite.” The reunion featured a few heated, but friendly, debates about climate change, he says.

“In that part of the world, it doesn’t take a rocket scientist to figure out that something horrendous is going on. The challenges are immense, and we can do it, but we have to agree to do it.”

Foote concurs. “My hope is that through continued outreach, education, and long-term programs such as Earth Camp [the department’s summer program for high school students], we continue to create enough problem solvers who hold the long view and can guide us to solutions that will make a positive impact on taking care of the earth.” 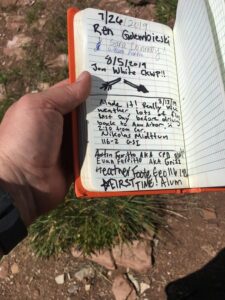 Hikers who make it up Cream Puff Peak leave messages to inspire one another. (Image: Heather Foote.)

Foote says she was thrilled her parents, brother, and two young sons could attend the reunion so she could pass her love of Camp Davis on to them. In August, she accomplished a personal goal of climbing the deceptively named Cream Puff Peak (elevation 9,665 ft.). She hiked it with another alumna and her son, as well as the sons of another alumnus.

“That trip up Cream Puff encapsulates what is so special about Camp Davis,” Foote says. “By itself, without the people, it’s a bunch of cabins. But Camp Davis is really about the people, the learning, the camaraderie, and the understanding that when we put each of our talents together, we are able to accomplish what wasn’t before possible.”

Perhaps one of the most luxurious accomplishments, most campers agree, is the improved dining experience. Few remember the food tasting so good when they were students. (Geissman says the staff cooks this well for the students, too, and he values their work so much he wants to join the cooking staff one day.)

As the campfire dwindles, the night sky comes to life with thousands of stars. Children of the alumni run freely in the dark, detectable only by their laughter, voices, and streaking shadows. Some campers return to their cabins, but others linger and stare into the colossal Milky Way blanketing the Hoback River Valley. It’s as if they are pondering their existence on earth, just as the first Camp Davis students did 90 years before. 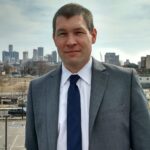