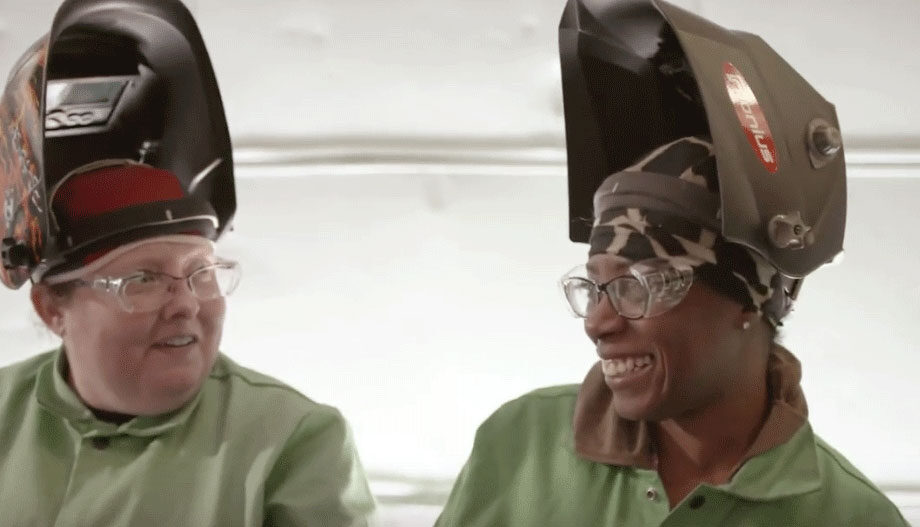 Samantha Farrugia was studying for her master’s degree in urban planning at U-M in 2014 when she walked past the Digital Fabrication Laboratory on her way to class one day. There was welding going on.

That’s when the sparks began to fly. Within weeks, Farrugia was learning to weld in her spare time. She moved on to learning how to train other people to weld through an unusual independent study supported by a U-M professor in the lab.

Welding turned out to be the ideal bond for Farrugia’s greater goal and degree: To better cities, communities, and people through economic development and opportunities.

Within months, her nonprofit, Women Who Weld, had sprung to life. It happened at a time when the welding industry needed workers and lacking gender diversity. That is still the case as the American Welding Society expects there to be a deficit of 400,000 workers by 2024, and few women—who currently make up 4% of the welding workforce—are trained to fill the gap.

“First it was like, “Wow I have this skill and I really enjoy welding and now I want to teach others this skill and it can lead them to a good job or put them on a great career path…,’” Farrugia says. “But it was very organic. It wasn’t like, “Oh, wow, there’s a need in the welding industry and now I should provide the skill of welding to others.’ It was, “This is really cool and I love it and I wish more women had access to learn this skill AND there happens to be a lot of opportunity in this industry. … It all fell together pretty quickly.” 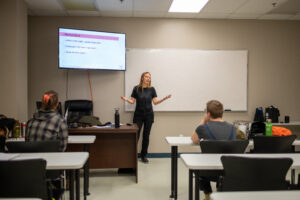 More than 450 women have completed training.

The full-blown nonprofit organization offers a partially subsidized, six-week intensive welding training program for unemployed and underemployed women; low-cost, week-long intensive welding training classes that include apprenticeships and job-placement support; and low-cost, single-day introductory workshops in Detroit, Madison Heights and other cities around the state, including Traverse City, Allen Park, Brighton, Ann Arbor and more, and has also gone on the road to California.

Women Who Weld pays the majority of the cost while participants pay the remainder.

Today, more than 450 women have completed Women Who Weld training and are working for numerous Michigan employers in need of welders. The majority of graduates received multiple job offers before graduation. There is currently a waiting list of 500 women for future classes.

“I really had no idea how much welding is needed,” she says, ticking off some of the industries—energy, defense, automotive. Besides learning to weld, she says Women Who Weld reinforced interviewing skills, financial planning, goal-setting and more.

“From one woman’s vision she’s seriously made a lot of womens’ dreams and goals become a reality and be achieved,” she says.

Farrugia just wants them to have that exposure she unexpectedly received on campus at U-M.

“Having access to the Fabrication Lab is obviously how this all began. … Otherwise, I don’t know where I would be,” she says.

Knowing that she could mix welding and skills training and urban planning gave her a focus.

Farrugia’s U-M experience “had a huge impact on who I am and how I approach life, how I approach Women Who Weld. It was not just through one class or access to the Fabrication Lab. It was all of my coursework.” 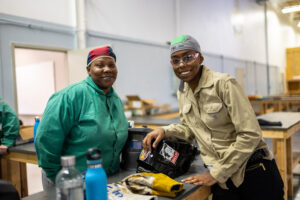 Farrugia does her best to make sure that graduates, many who had never welded much less made it their career, are where they want to be now and in the future.

“Many move into an entry-level or intermediate-level job. I encourage everyone after a year to make sure it’s the environment you want to be in,” she says. “Do they want to enter apprenticeship, take more classes, training? Is there a pathway up?”

Dalana Burney, a recent Women Who Weld graduate, was yearning for advancement in her work.

She is grateful for the program that has allowed her to “do something that’s not only fun but also profitable. … Whether I want to open my own fabrication shop or work as an artist in welding.”

iShe is in a job with opportunity for promotion or building a path to her own business.

“This six-week course has changed my life. … It’s given me so many more opportunities than I had. … I’m 38 years old. My life has been a little hard … but I pushed through,” Burney says. “This is showing me you can do anything you put your mind to and you’re never too old to go out and start living and doing what you want to do, to make a living the way you want to. They’ve given me everything.”

Robert Fishman, professor at the A. Alfred Taubman College of Architecture and Urban Planning, says it’s inspiring to see graduates impacting others.

Find more “Stories of Our State” and learn how U-M is improving lives across Michigan.
“One of the things I think we’re most proud of is the way in which our best students go in directions that we ourselves could never have foreseen,” he says. “And Samantha is such a great example of someone who saw an opportunity, who made herself, thanks to opportunities we had and who went out and is changing the world.”

Yvonne Brown, another recent graduate of the intensive six-week training, is now working at a metal finishing company.

“It helps you with everything … career choices, confidence building, character. She teaches you the whole package. She basically gets you prepared for the industry,” says the mother of two. I was interested in something that’s very secure and also could bring out my artistic side and that I could have for the rest of my life. I had never welded.”

She discovered her artistic ability: “To see something I could create and people compliment sold me.”

Brown sees Women Who Weld, as a “phenomenal program for women. They may feel like it’s not for them, that it’s for a male-dominated industry. … I feel like any woman that wants to level up in her life and you have no idea where to start, welding is a good idea.”

“Welding is something a woman should take up,” she says. “It makes a woman feel powerful. It makes us feel like we can do something different that nobody expects us to do.”