An unfamiliar strain of influenza reached Ann Arbor some time in the final days of September 1918. The early symptoms felt like a common cold plus “more marked irritation of the mucous membrane of the nose, mouth, and throat.” By October 1, 10 men and two women in their 20s and 30s, none of them University of Michigan students, had been hospitalized.

But the illness was not much remarked on. In Europe, the First World War appeared to be approaching its climax. So the front pages were crammed with headlines about Allied troops breaking out of the stalemate in the trenches of the Western Front. 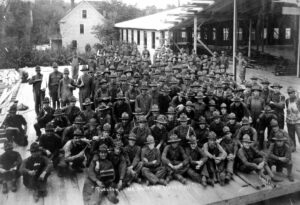 The disease had originated in Spain, the papers said. Elsewhere in the U.S., it was spreading fast in military camps where soldiers were sheltered in close quarters as they awaited deployment.

Conditions like that existed at Michigan. Some 3,750 young men had joined the Student Army Training Corps (SATC) and a naval training unit. They were quartered in makeshift barracks in the old Michigan Union building, Waterman Gym, and 35 fraternity houses.

Local doctors were sure the effect in Ann Arbor would be minimal. It was just another round of the familiar fever called la grippe, Dr. Eloise Walker of the University Health Service told freshman women. Stay in good health and you’ll be fine, she said.

By October 3, nearly 2,500 Americans had died, most of them from the galloping pneumonia that followed fast on the heels of the new flu.

That day, members of the SATC were denied passes to leave town.

So began the events that led, day by day, to two terrible weeks in the University’s history.

“A much brighter aspect”

October 5. Twenty-seven influenza cases in the city are reported. The state Board of Health orders posters saying: “Do not cough, sneeze, or talk directly into another’s face.” Twenty-five nurses are dispatched from city hospitals to fight an outbreak at the Army’s sprawling Camp Custer, near Battle Creek.

From Michigan Medicine: “This Infection, Like War, Kills the Young” — As the 1918 influenza pandemic circled the globe, U-M Medical School Dean Victor Vaughan was called in to help unravel the mystery of the deadly illness.
October 7. A member of the SATC dies of pneumonia, though officials say he’d fallen sick elsewhere. Eight students, not including SATC members, are reported ill. The Daily is told that “the situation here, as in the camps, has taken on a much brighter aspect and it is expected that the number of new cases will decrease from day to day.” The varsity football game against Camp Custer’s squad is postponed. Coach Fielding Yost recruits Mount Union College to play instead.

October 9. SATC headquarters denies a rumor that 135 members have influenza. Sixty cases are reported among non-SATC students, all said to be mild. A Daily editorialist writes: “Apropos of the false alarms which are rampant, there might be suggested a factor which is very potent in warding off the disease. That factor is a cheerful state of mind, a condition which forms a strong barrier to the approach of sickness.” 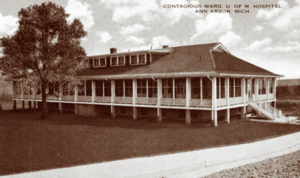 October 11. Three deaths are recorded — Jack Rubin, a senior from Detroit in the SATC; Lorne Collen, an assistant instructor in the Chemistry Department; and Mrs. E.L. Whitman, wife of a dentistry professor, leaving three children.

The old Michigan Union building on State Street — originally the home of Judge Thomas M. Cooley, dean of the Law School — is converted to an infirmary to handle the overflow from University Hospital, the Homeopathic Hospital, and St. Joseph Hospital. Another infirmary is set up in Barbour Gymnasium to house SATC members with only mild symptoms.

Michigan Gov. Albert Sleeper requests the suspension of all public gatherings from movie showings to church services. He says he’ll order it if the request is ignored.

U-M had actually opened its first contagious disease facility in 1897, in a shack that had served as the former hospital laundry. Read more history of the University’s role in fighting infectious disease at Stopping contagion with science: A look back, courtesy of Michigan Medicine.
October 12. Movie showings at Ann Arbor’s Majestic and the Orpheum are packed. Dr. J.A. Wessinger, the city’s health officer, says new cases appear to be declining. University officials deny rumors that classes will be suspended, though they ask students with symptoms to stay home.

The Daily prints: “In spite of the repeated statements of the health officers that the situation in Ann Arbor is not alarming and the insistence that each day is the crest of the disease, actual conditions from an observer’s viewpoint seem to grow worse.” 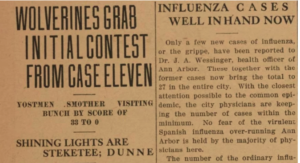 “No fear of the virulent Spanish influenza over-running Ann Arbor is held by the majority of physicians here,” reported ‘The Michigan Daily,” in fall 1918.

October 15. Eight die, including five in SATC. Ralph Smith, an Ann Arborite in the corps, dies of a hemorrhage in the lungs; he’d first reported sick at reveille only the day before. Three sisters of Chi Omega are diagnosed. Seniors in the Medical School are assigned to care for the sick. Many SATC men are confined to their quarters, awaiting diagnosis.

“It is like the Hun,” says an SATC sergeant-major. “Either you down him or he gets you.”

“Squads of men loaded with trays of steaming food hastening through the streets at a gallop have become such a common sight that citizens have ceased to turn and stare,” the Daily reports. 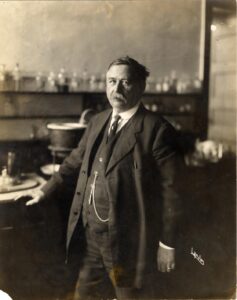 October 17. With six to 10 deaths each day in the SATC alone, U-M President Harry Burns Hutchins directs students and faculty to wear face masks at all times. Red Cross volunteers move into the President’s House to sew masks for distribution across the campus starting at seven the next morning. Captain B.C. Vaughan, medical officer of the SATC, says the masks may do more harm than good, since students are unlikely to use and wash them properly. Dr. W.E. Forsythe, head of the University Health Service, says masks are essential to containing the spread.

Forsythe says “it would be perfectly absurd” to cancel classes. “The students would seize the opportunity to go to their homes, thus spreading the disease if it is already in their systems or running into the danger of contracting it on crowded trains or in their hometowns. On the other hand, if school were closed and the students were forced to remain in Ann Arbor, they would spend their time in each other’s rooms in small crowds or wander the streets, which is worse than staying in well-ventilated classrooms with their masks on.”

October 23. Dr. Forsythe says the spread appears to be on the wane, with only three new cases among non-SATC students in the last three days. Sergeant-Major Fischer of the SATC warns: “The people of Ann Arbor must not let up in taking precautions merely because there are fewer new cases. Conditions will not get back to where they were unless people continue to be careful.” 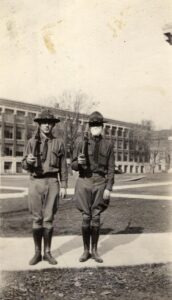 October 31. Three in the SATC die but no new cases in the corps are reported. Dr. Wessinger says he will recommend reopening Ann Arbor schools if the improvement continues one more day — though not movie theaters or other public gatherings.

November 9. Movie theaters reopen, with Douglas Fairbanks in Say, Young Fellow at the Majestic and Mary Pickford in Amarilly of Clothes Line Alley at the Orpheum. A Daily writer remarks: “The theatres have become such a factor in the average person’s life that they were sorely missed when they were closed. ‘Oh, to see a movie’ has been sighed by more than one since the influenza epidemic came upon us.”

November 10. Hill Auditorium is packed for the United War Work meeting, with the SATC band leading the program with “Varsity.” As the the Daily reported, “the dormant enthusiasm which had been held in check for so many weeks by influenza, was at last given full sway and let loose.”

November 11. The long-awaited armistice is declared in Europe. World War I is over. Eight thousand people merge in a giant impromptu parade through the streets of Ann Arbor, followed by “patriotic performances” in the theaters and “peace dances” in the dance halls.

Sources included the Michigan Daily and Howard H. Peckham, The Making of the University of Michigan, 1817-1967.