The idea to ‘flatten the curve’ 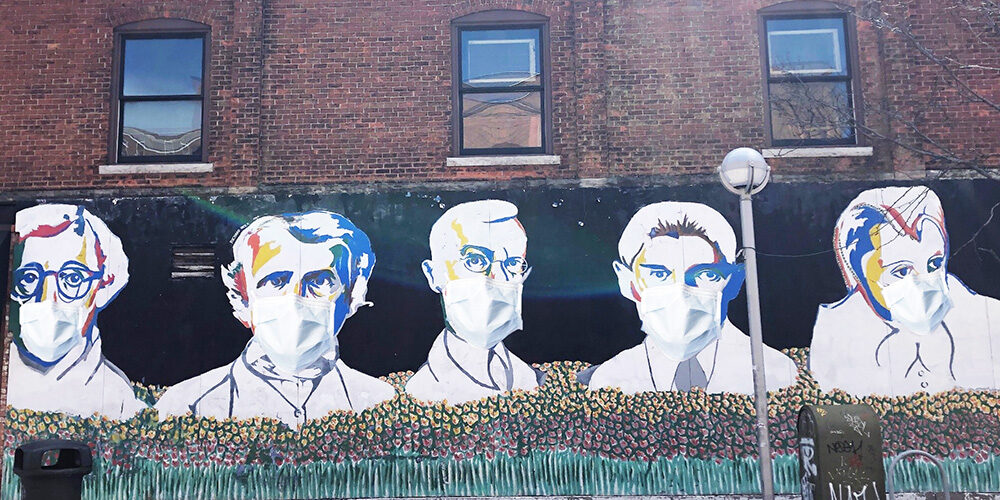 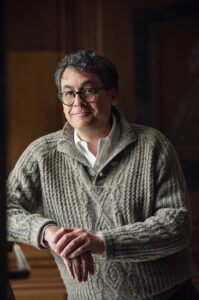 Early in 2006, wild birds were dying in high numbers. The cause was found to be a highly contagious influenza virus called H5N1 — the “avian flu.” The virus had infected a small number of humans who had handled birds. Scientists were afraid it might mutate and leap from person to person in catastrophic numbers.

A few months earlier, the Bush administration had been seen as flat-footed in its response to Hurricane Katrina. Officials meant to be better prepared for any new natural disaster, including an H5N1 epidemic. So they convened a task force to recommend plans — epidemiologists, virologists, bioterrorism experts, scientists from the National Academy of Medicine, analysts from the U.S. Departments of State and Defense, and one authority on the history of medicine.

The administration asked the task force: What should we do if the avian flu — or any other viral epidemic — gets really, really bad?

Markel, with colleagues from the U.S. Centers for Disease Control and Prevention, got to work.

Staring at a graph

They soon developed a working hypothesis. It went like this: 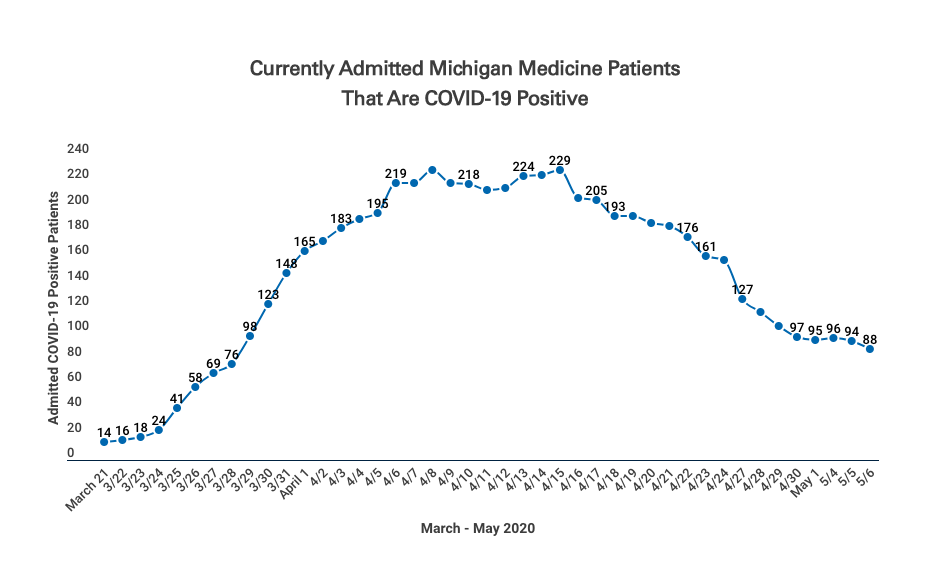 This graph tracks Michigan Medicine patients that are COVID-19 positive from March-May. Note the shape of the curve. Follow @umichmedicine on Instagram. This chart is routinely posted.

Tell me what you see

The idea was developed in long discussions in Atlanta, home to the Centers for Disease Control and Prevention. On graph paper, experts drew curves. The X axis represented time. The Y axis was people — possible numbers of people infected; possible numbers of the dead; and intensive-care beds to hold them. How high would the curves of the sick and the dying go? And over what period of time?

They kept staring at those arcs. The higher the curve of acute infections, the worse it would be in the hospitals.

Somebody said: What we’re talking about is flattening that curve.

In other words, keep the number of infections as low as possible for long as possible, to minimize deaths until a vaccine could bring the pandemic under control. The first weapon against the virus might not be a drug but a set of human behaviors — “non-pharmaceutical interventions,” to use the scientists’ label.

But it was just a hypothesis. Had such a thing ever actually been tried, and if so, had it worked?

Markel set out to answer the question.

Even Google got on board with educating the masses about “flattening the curve.”

First, he recruited staff — a dozen or so researchers to gather every surviving scrap of information about the United States’s response to the “Great Influenza” of 1918-19, at the tail end of World War I. (The “Spanish flu” is a misnomer. The virus probably originated in Kansas, not Spain. The name arose because Spanish newspapers were the only ones in wartime Europe to report honestly on the crisis.) It came in three waves — spring 1918; fall 1918; and winter 1919. It was the worst pandemic of modern times, killing 550,000 people in the U.S. and some 40 million around the world.

People in many places in the U.S. fought the influenza with non-pharmaceutical interventions, though no one called them that then. To see if they had done any good, Markel’s crew focused on 43 cities with populations over 100,000. They combed through every edition of the U.S. Census Bureau’s Weekly Health Index for 1918-19; reports issued by city and state health departments; 86 newspapers; records of military encampments; and every published account of the pandemic they could find — more than 20,000 documents in all.

They documented activities now familiar in 2020 — school closings; bans on concerts, movies, and sporting events; efforts to isolate the sick and quarantine those who’d had contact with the sick; business closures and staggered hours; restrictions on trains, buses and trolleys; and ordinances to require face masks.

All 43 cities used non-pharmaceutical interventions. Some acted early, comprehensively, and for long periods. Other efforts were late, half-hearted, and brief.

“This I know. If we release these measures too early, we’re going to be back in the same situation that we were in, in terms of cases and deaths, or perhaps worse, and we will have crippled the economy and caused all this social disruption for nothing.” — Howard Markel
Here’s what the researchers found:

“They didn’t cure the influenza,” Markel said. “It was just about buying time.”

So the White House got the advice it had asked for: If a pandemic arose in the 21st century, every effort should be made to promote early, strong, and persistent non-pharmaceutical interventions in the lethal period before the production of a vaccine.

Lots of birds were killed by the H5N1 virus, but comparatively few humans.

The CDC now looked to the future. Using the 1918-19 findings from the Center for the History of Medicine, they incorporated plans to “flatten the curve” in a 108-page primer titled Interim Pre-pandemic Planning Guidance: Community Strategy for Pandemic Influenza Mitigation in the United States.

It went on the shelf, to be saved for some worst-case scenario to come.

Three months ago, as we all know, one such scenario took over the world. The CDC’s plan (updated in 2017) came off the shelf — and “flatten the curve” became a global watchword.

“It’s very hard to make a ding in the universe,” Markel says, “and I think the work that we did at the Center for the History of Medicine made a ding. We actually made a contribution. We’re seeing worldwide that this is helping … It’s really gratifying from a research point of view and really horrifying with respect to our daily lives, because this is a worst-case scenario.” 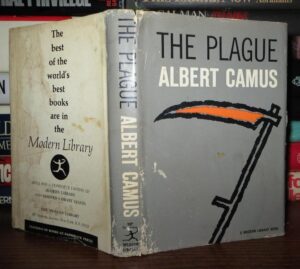 The Plague (French: La Peste) is a novel by Albert Camus, published in 1947. It tells the story of a plague sweeping the French Algerian city of Oran.

Since their original effort in 2006-07, Markel and his staff have compiled even more information about the 1918-19 influenza in the U.S. In time, they created a massive searchable database, “The Influenza Encyclopedia,” with accounts of the epidemic in 50 American cities in all, supplemented by photos, maps, charts, timelines, and documents. The project is a collaboration of the Center for the History of Medicine, Michigan Publishing, and the U-M Library. The website had 20,000 hits in the first two weeks of April.

Markel has been much in demand among journalists who want to know what he thinks will happen next. He is careful to say that historians are not in the business of predicting the future. But he points to the evidence of 1918-19 for guidance.

“The key word about this coronavirus is ‘novel,'” Markel told the New Yorker recently. “We don’t have any experience with COVID-19. We won’t know it’s over until long after it’s over, so it’s hard to know when to release the trigger.

“This I know,” he continues. “If we release these measures too early, we’re going to be back in the same situation that we were in, in terms of cases and deaths, or perhaps worse, and we will have crippled the economy and caused all this social disruption for nothing.”

Markel teaches an undergraduate course on literature and medicine. Among the books he assigns is Albert Camus’ The Plague, a novel set in French Algeria after World War II. In the city of Oran, rats infect humans with the bubonic plague. Officials downplay it, then dither. Panic and violence ensue, triggering martial law. When the pestilence finally subsides, the survivors are all too ready to forget their lethal folly.

The novel’s final words, Markel has written, describe “a mind-set that threatens the world for pandemics to come.”

. . . as he listened to the cries of joy rising from the town, Rieux [a doctor who had struggled to persuade his fellow townsmen they were in mortal danger] remembered that such joy is always imperiled. He knew what these jubilant crowds did not know but could have learned from books: that the plague bacillus never dies or disappears for good; that it can lie dormant for years in furniture and linen-chests; that it bides its time in bedrooms, cellars, trunks, and bookshelves; and that perhaps the day would come when, for the bane and the enlightening of men, it would rouse up its rats again and send them forth to die in a happy city.

Sources included Howard Markel, et al, “Nonpharmaceutical Interventions Implemented by U.S. Cities During the 1918-19 Influenza Pandemic,” Journal of the American Medical Association, 298:6 (8/8/2007); Markel, “‘The Plague’ Perfectly Captures the Risk in Returning to Normal,” PBS News Hour, 4/16/2020; Kara Gavin, “With the COVID-19 Curve Flattening, It’s Time to Prevent a Second Peak,” M Health Lab, 4/15/2020; “A Medical Historian on Why We Must Stay the Course in Fighting the Coronavirus,” The New Yorker, 4/1/2020.