The perils of social media and self-delusion 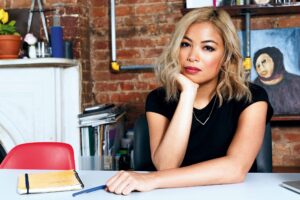 “There have always been social structures through which people generated an idea of themselves that they would then perform for others,” says essayist Jia Tolentino, MFA ’14. “It’s not like ‘identity performance’ is something the Internet invented. But the Internet systematized and monetized it at an unbelievable scale. I think we’re experiencing this kind of weird alienation and dislocation while so much [of our individual selves] becomes co-opted by capitalism.”

That was best-selling author Tolentino, often described as “the voice of her generation” (millennial, that is), before COVID-19 came to town. Alienation, dislocation, capitalism: Imagine the themes she’ll explore post-coronavirus.

Till then, the New Yorker essayist offers Trick Mirror: Reflections on Self-Delusion (Random House, 2019), a collection that reflects her complicated and provocative relationship with digital media. Not only did Tolentino grow up online, she found her voice there, as a review in the Guardian notes. It’s been said she literally was “formed online,” writing and editing at thehairpin.com and jezebel.com.

Tolentino grew up in Houston, the daughter of deeply religious Filipino parents, taught English in the Peace Corps, and is a voracious reader with seemingly encyclopedic knowledge of the Bible. She made her life in Brooklyn prior to the pandemic’s arrival. 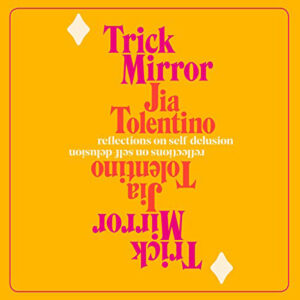 The essays in Trick Mirror are about “the spheres of public imagination that have shaped my understanding of myself, of this country, and of this era,” the author writes. That includes Internet culture, reality TV, feminism, drugs, religion, and the concept of “optimizing” at all times. The book also takes a close look at how American society demands a level of self-deception from its citizens, both individually and collectively.

Tolentino spoke to Michigan Today earlier this year during her book tour. We checked back in, post-shutdown, to see how she was thinking about this unprecedented global pandemic and its impacts. Based in upstate New York at this time, she is doing her best to embrace the Zoom interview.

“I feel extremely lucky to be in a quiet place with outdoor space and to have a job,” she says. “As time passes, these online meetings might feel more normal, or they might feel just increasingly divorced from a bygone reality of human contact, especially if the filters and effects get more complicated. Sometimes I’m talking to friends and feeling that by week seven, the screen will look like a bunch of CGI vegetables floating in space.”

Following are Tolentino’s thoughts about ‘Internet brain,’ historical self-delusion, and what she loves about Ann Arbor.

On social media in the age of COVID-19

I think it’s become especially clear right now that the Internet is designed in such a way that the simultaneity and scale of human experience very easily becomes unbearable. On social media, you have people posting loaves of bread and cheerful “we’re-all-in-this-together” captions from deluxe vacation rentals at the same time that you have reports of hospitals rationing care and photos of graves being dug in NYC’s public parks.

One thing I find promising is that a fundamental premise of the identity economy (that it’s good and interesting and perpetually monetizable to have people performing an attractive version of their lives to one another) is looking especially stupid right now. No one wants to see celebrities in their mansions talking about wellness routines. No one wants to see influencers posting photos of themselves in beautiful, novel environments, because that means they left the house.

I think this will scramble the already ridiculous idea that having a privileged, photogenic life has anything to do with moral living. Certainly this time has already made it much clearer that individual well-being often comes at the exploitation of collective well-being.

On women in the age of social media and online identity

Women are asked from a very young age to be aware of how they look to other people in a way that men are not. I think that is one of the reasons women — for better and definitely for worse — have been able to monetize self-surveillance on the Internet. The entire influencer industry is full of women. I write a lot about gender and online identity and how the performance of both intersect. There are social media networks whose economic model depends on a constant, aggressive identity-performance. There have always been social structures though which people generated an idea of themselves that they would then perform for others. What is different is that the Internet systematized and monetized it at a kind of unbelievable scale.

On the monetization of social media, privacy issues, and ethics

I think ‘the attention economy’ is inherently unethical. These are systems specifically designed to be beyond regulation. They can’t make money unless they retain more and more of our attention and there’s really no way to do that in a way that’s healthy for our souls and our brains. The only way out of that, I think, is to nationalize and regulate [the Internet] like a public utility, which is unlikely to happen in this country. It’s kind of impossible to imagine even basic privacy regulations being put in place, at this moment, even though I certainly hope that the next president would do that.

On dealing with ‘Internet brain’

We hear so much about the degrading attention span. I’m not sure it’s just a problem for my generation, but you know we’re native to it. I, too, have ‘Internet brain damage,’ and I can hold my own attention through a 9,000-word essay. I think writing can and should be a corrective to ‘Internet attention span.’ The flow-state of writing is a reminder that Internet brain doesn’t feel good. It actually feels pretty bad. Sustained attention feels good. That’s why I read so much.

On American personal and historical self-delusion

How does a person get out of self-delusion? It’s different in every context, depending on which narrative is taking hold. That narrative is different from person to person depending on the stories they’ve grown up under. We’re experiencing this at a macro scale with something like the [New York Times’] “1619 Project.” It’s certainly not universal in America, but there’s a broader movement to understand that the American national narrative is, itself, pretty delusional. This idea that it was a land of freedom and opportunity for everyone … there is a continual reckoning with the fact that this narrative isn’t true. I mean how does anyone get out from under it? I think the baseline commonality is that it requires being uncomfortable.

On bad writers in good places

I feel a lot of doubt about the work of just sitting down and writing what you think all day. I think any decent writer should contend with the essential potential uselessness of what they’re doing and the great ever-present danger that you’re wasting somebody’s time; that you’re not actually contributing anything useful to the world; that any sanitation worker is doing more for the common good. It’s clear there are a lot of people who have prominent positions in prominent places who seem to think everything they write is brilliant. And it makes their work bad.

On being a Texan

Growing up in Texas was incredibly good for me as a writer because I don’t really care if people agree with me or not. I was never around people who thought the same thing I did. The biggest problem with journalism is that it’s hard to make a living at it. There’s this crop of people who are able to take jobs in New York that pay them $25,000 a year because they’ve already got money. We are not hearing the working-class voice in media and that, to me, is the greatest shame. It’s only getting worse as the industry keeps contracting.

On the Helen Zell Writers Program at U-M

It was amazing. It was the first time in my life that I got paid to write what I wanted and that’s enormously transformative. Before I started the program, I had no idea whether I would ever be able to write for a living and by the time I finished, I was like, “Oh, I bet I can.” But who knows in what capacity? Who knows where? Who knows what’s going to happen? I felt that switch, and it was life-changing. I am still really close to a lot of people in my program. They are people I can talk to about books in a way that I can’t with anyone else.

On what she loves about Ann Arbor

Number one is how late the sun sets in the summer. I’ll say number two is my friend Tim who bartends at Blue Tractor. I also became really good friends with my mailman. Houston’s enormous. New York is enormous. Ann Arbor was a much smaller place. It felt like a little cocoon to write it in. It was great.

On how to become a writer