The beginning of what?

Spring 2020 will forever be known to graduating students as the year COVID-19 stole commencement.

It’s a plot twist few Michigan students could have seen coming when they conceived the story of their college experience. The live-action pomp and circumstance of the Big House went digital and drive-by as 2020 graduates sought alternate ways to celebrate this milestone. Meanwhile, commencement speakers the world over struggled to recast the words of wisdom they had planned to impart before coronavirus canceled everything. If they delivered a speech at all, it was probably to a light on a camera.

The end is just the beginning

Michigan’s commencement tradition began Aug. 5, 1845, when the first University graduates received diplomas. Alumni have heard some 150 commencement addresses since then, many of which share a common theme: Each class inherits the great events, great problems, and great possibilities of their time. From the Civil War, McCarthyism, and a presidential assassination to the Vietnam War, the September 11 attacks, and, now, coronavirus, speakers have expressed both trepidation and confidence for what the graduates will face.

Not surprisingly, the Class of 2020 proved resilient in facing down COVID-19 this spring. Each college and school made the most of the digital medium when the administration canceled live events. Even the Michigan Marching Band and Men’s and Women’s Glee Clubs got in on the virtual commencement action.

In 1878, the former Attorney General of Michigan George V.N. Lothrop opened his address with an overview of Michigan’s past, because “all sound moral growths have an honest and instructive history.” The “Rebellion of the South,” as Lothrop called the Civil War, demonstrated the power of an educated mind.

“The victory of the Union wads the victory of the highest thought and science of modern times,” he said. “I must, however, add that, while it is clear that education arms and qualifies a people for the highest triumphs and successes in war, this is not the highest stage of its power. The promise of peace on earth will surely be fulfilled.”

The Bentley Historical Library archive contains many accounts, text copies, tapes, and/or videos of U-M commencement addresses. Find a selection of sound and video recordings of those speeches at YouTube.

In 1918 a “greatly reduced” senior class convened in Hill Auditorium for the commencement ceremony. A flag with 473 service stars hung over the stage representing absent peers due to World War I. Indiana University President William Lowe Bryan’s address was bleak, opening with the idea that “…the infinite millions of living things are compelled to struggle with all their might in order to get food, to escape their enemies, to escape death.”

Just two years later, Hill Auditorium was packed with the largest undergraduate class to date in U-M history. University President-elect Marion Burton began his jubilant address, “I envy you with all my heart! On the first of July you become a free citizen at liberty to express your convictions upon all public issues and to serve as the mentor of Michigan standards and American ideals.” The title of his speech was, appropriately, “Being Alive.”

Commencement Ceremonies that Broke with Tradition
Amid the throes of World War II, U-M President Alexander Ruthven made no attempt to sugar-coat reality. “The world is fairly well filled with wickedness and all the ordeals of the Apocalypse,” he said.

And with that, he laid out the graduates’ monumental task:

“No one with as much as ordinary intelligence will deny that you are facing stern reality,” he said. “Upon leaving college, you will immediately be engaged in a struggle which will demand all of your courage, strength, and perseverance. Your very existence is endangered by a powerful coalition of enemies who dislike both you and what you stand for as a group. This threat must be destroyed if you and your descendants are to save your heritage and live as free men and women. You know one thing you have to do to be saved, and you will do it. We are confident you will fight the good fight.”

Broadcaster Edward R. Murrow was, at the time, perhaps the biggest celebrity to deliver a commencement address at U-M when he told the class of 1961 that his words would “of course be forgotten” since that is the “deserved fate of Commencement speeches.”

Having just endured the “Red Scare” and the McCarthy era, Murrow ended his speech by encouraging the students. “It is given to no man, not even the head of the United States Information Agency, to know the future, but it seems to me that all times and in all circumstances it is useful to have the youth of the nation greet the unknown with a cheer. I hope you will do that.”

No time for politics 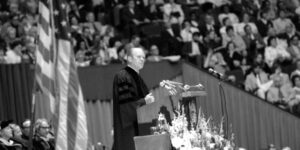 “I would insult you … if I gave you a purely political speech. My views are pretty well broadcast,” said Vice President Ford in 1974.  (Image: U-M’s Bentley Historical Library.)

Michigan alumnus Gerald Ford, BA ’35, presented his commencement address on May 6, 1974, six months into his sudden ascension to U.S. vice president following Spiro Agnew’s resignation. The impeachment process for President Richard Nixon was well underway, but Ford didn’t address it directly, saying that “I would insult you … if I gave you a purely political speech. My views are pretty well broadcast.”

Instead, Ford praised the process itself. “I am proud to be a citizen of a country which can openly debate the legal and moral fitness of its highest government leaders without riot or revolution, without reprisals or repression, and within a Constitutional system so strong and secure that its position in the community of nations is undiminished.”

Words to live by

“We should be careful not to let anxiety prevent us from imagining that a fascinating and unpredictable future still exists.” — Charles Baxter
U-M creative writing professor Charles Baxter gave the first commencement address after Sept. 11, 2001. Baxter didn’t address the tragedy itself, but he challenged the graduates not to be paralyzed by fear and anxiety.

“In a historical period dominated by anxiety, that very anxiety can be a corrective to mindless and perhaps selfish optimism,” he said. “We cannot get rid of our anxieties or our histories, nor should we try. We would become foolhardy if we did. But we are in a time when we should be careful not to let anxiety prevent us from imagining that a fascinating and unpredictable future still exists. And that great plans are still in the works.”