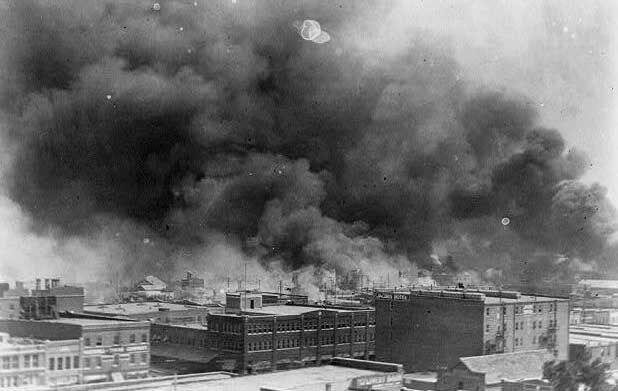 Editor’s note: In light of recent uprisings across the U.S. (as of May 30, 2020), Michigan Today is reposting this story, originally published July 18, 2019. We are so proud of Michigan alumna Maggie Yar for her research and social activism. At the same time, we are disheartened by history repeating itself, to the day, 99 years later. 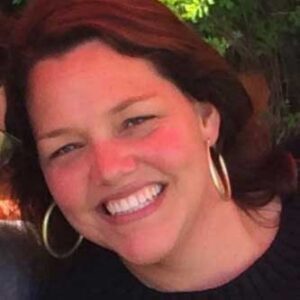 You know a community wants to reconcile the blood on its bootheels when some of its leaders start referring to its Race Riot as its Race Massacre.

That the community, Tulsa, Okla., is in what is commonly viewed as a red state perhaps makes the reconciling  — a century after the event — all the more significant.

In the thick of the effort is Maggie Yar ’95, executive director of the Hille Foundation, an organization founded by her parents that serves low-income residents in the Tulsa area. Yar is chair of the economic development committee of the Tulsa Race Massacre Centennial Commission, which is working to educate the local community and the nation about the massacre. Her committee also is striving to spur redevelopment in “Black Wall Street,” as Tulsa’s Greenwood neighborhood was known before the massacre.

Planning now is underway to mark the centennial, which occurs in 2021.

A crash course in reality

Just how serious were the attacks on Greenwood? Below is a summary from the Tulsa Historical Society and Museum:

On the morning of May 30, 1921, a young black man named Dick Rowland was riding in the elevator in the Drexel Building at Third and Main with a [white elevator operator] named Sarah Page. The details of what followed vary from person to person . . . An inflammatory report in the May 31 edition of the Tulsa Tribune spurred a confrontation between black and white armed mobs around the courthouse . . . In the early morning hours of June 1, 1921, Greenwood was looted and burned by white rioters. Gov. James Robertson declared martial law, and National Guard troops arrived in Tulsa. Guardsmen assisted firemen in putting out fires, took African-Americans out of the hands of vigilantes and imprisoned all black Tulsans not already interned. Over 6,000 people were held . . . In the wake of the violence, 35 city blocks lay in charred ruins, over 800 people were treated for injuries and contemporary reports of deaths began at 36. Historians now believe as many as 300 people may have died. 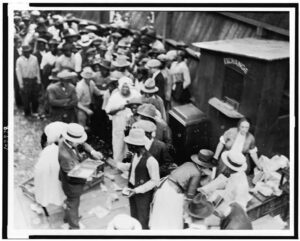 To get a sense of just how much Tulsa historically has tried to keep the incident quiet, Yar, a Tulsa native, didn’t learn about it until after earning her law degree from Southern Methodist University, in Dallas, in 2001.

Indeed, the commission initially used “Riot” in its own name, then changed that word to “Massacre.”

“We have never dealt with the massacre the way that we should have. We have not made it a part of our city’s fabric in the way that it should be,” Yar says.

It’s “shocking, horrifying” that the incident is not more well known, she says. “Embarrassing, personally,” she adds. “How did I not know that about the city I grew up in? And why isn’t it being taught in school, why isn’t it something that, if you’re from here and live here, that everyone knows about and talks about?”

“You had white men coming into Black Wall Street by the truckloads and literally taking people out, lining them up, and burning everything,” Yar says. “You have blocks and blocks literally burned to the ground. I mean, it was a massacre. A riot implies the two sides were fighting against each other, and that was not true.

“I don’t think that history is questioned, we’re just hiding that it happened at all.” 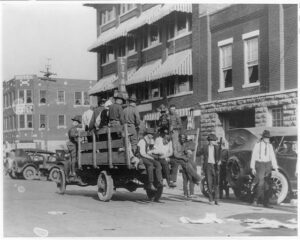 Yar believes her Michigan experience helped prepare her for her role as a citizen who wants to set the record straight.

“I definitely had my eyes opened; I was exposed to more differences and more points of view,” she says. “Michigan definitely taught me how to critically think and how to give a point of view and have to argue it and stand by it.”

Yar says she wants the economic development efforts she’s leading to include creating a “world-class museum or exhibit” to remember the massacre, Black Wall Street, and Greenwood.

“I don’t want this to be just a one-time event, or one thing that we just commemorate in 2021 and that’s it,” Yar says. “I’m hoping that the commission’s work will really allow it to become part of our city’s fabric.”

In Yar’s view, city and state government leaders are supportive of the centennial plans, and white residents have not been resistant. But there is a wariness among African-American residents in Tulsa about how the massacre will be remembered.

“There is a lot of hurt and a lot of anger and a lot of mistrust,” she says. “Our race relations are far from perfect; I think we have a long way to go. But is there a lot of good work going on? Yes, there have been a lot of strides.”