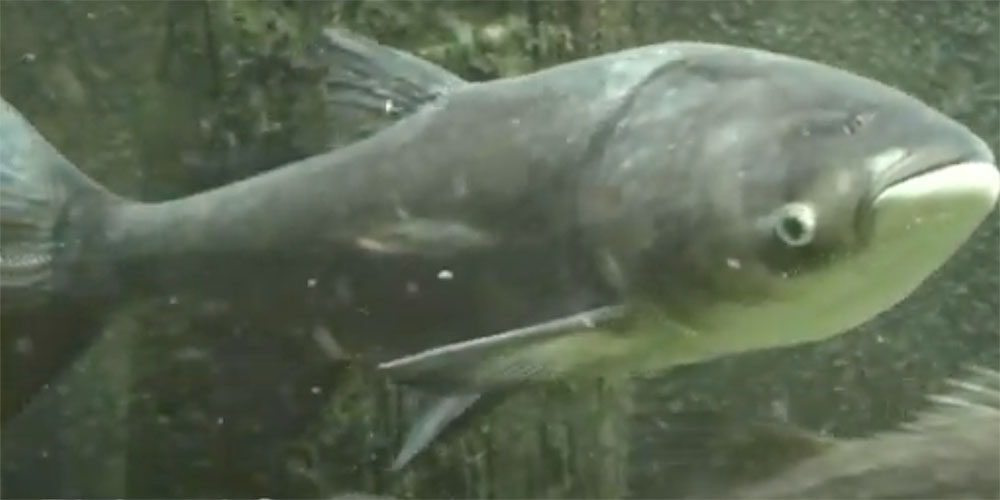 The ongoing warming of Lake Michigan increases its susceptibility to Asian carp, in part by reducing the capacity of quagga mussels to act as an ecological barrier against the voracious algae-eating fish, according to a new University of Michigan-led study.

Asian carp and the trillions of quagga mussels that carpet the bottom of Lake Michigan would compete for the same food — algae and other types of plankton. Some Great Lakes researchers have suggested that the fingernail-size mollusks could help prevent the invasive fish from gaining a foothold.

A huge worry is that Asian carp might outcompete plankton-eating Great Lakes fish — which include the larval stages of most fish species — and devastate the region’s $7-billion fishing industry.
Don’t count on it, the authors of the new computer modeling study conclude. Even in the best-case scenario, the mussels’ ability to help fend off Asian carp would be limited in time and space, and both climate warming and nutrient pollution could lessen any protective role the mussels might play, the researchers determined.

The new study was led by researchers at U-M’s Cooperative Institute for Great Lakes Research and the National Oceanic and Atmospheric Administration’s Great Lakes Environmental Research Laboratory and was published July 7 in the journal Biological Invasions. It focuses on the two species of Asian carp, bighead and silver carp, of greatest concern for the Great Lakes.

The new paper builds on one the same team published last year in Freshwater Biology, which found that bighead and silver carp would be able to find sufficient food in Lake Michigan and that they pose a high risk of becoming established there.

“Our new research demonstrates that the presence of an already entrenched food competitor — the mussels — has a limited capacity to act as a barrier to a bighead and silver carp invasion, and that climate warming and nutrient enrichment could further diminish the mussels’ ability to affect Asian carp habitat,” says study lead author Peter Alsip of the Cooperative Institute for Great Lakes Research.

Alsip, who was also the first author of last year’s Freshwater Biology paper, conducted the Asian carp research for his master’s thesis at U-M’s School for Environment and Sustainability.

It comes in threes

The new study looks at how three factors — climate change, nutrient management, and the arrival of zebra and quagga mussels — have affected Lake Michigan’s vulnerability to bighead and silver carp, which currently reside in adjacent watersheds but not in the lake itself.

The team’s simulations of historical conditions showed that Lake Michigan would have been more hospitable to Asian carp in the 1970s and 1980s, when levels of the nutrient phosphorus were much higher and zebra and quagga mussels had not yet been established. The simulations show that bighead carp would have grown roughly two to five times faster in the 1980s, compared to current conditions, with higher phosphorus levels being more influential than the absence of the mussels.

When the researchers simulated the levels of climate warming expected in coming decades, the Asian carp habitat improved in two fundamental ways.

“One of our key findings is that spring is the most affected season, and that’s when most of the fish species in Lake Michigan have their plankton-eating larval stages. Thus, climate changes and nutrient levels that favor Asian carp establishment may also enhance the negative effects of Asian carp on other fish species.” — Co-author Hongyan Zhang
The fish fed more actively in warmer waters during the spring. And the annual summer “stratification period” (when lake waters separate into three distinct layers due to temperature and density differences) started earlier and lasted longer, limiting the time that top-feeding Asian carp and the bottom-dwelling mussels would compete for food in the upper portions of the water column.

Great Lakes surface temperatures are already warming faster than the global average increase, with Lake Michigan’s surface waters warming at the rate of roughly half a degree Fahrenheit per decade. The duration and extent of winter ice cover across the Great Lakes also is shrinking, and climate models suggest the summer stratification period in Lake Michigan and other northern temperate lakes will grow longer and start earlier in the years ahead.

Earlier stratification would benefit Asian carp by blocking the mussels’ access to food in surface waters and would also open up previously unsuitable offshore habitat to the fish earlier in the year, according to the new modeling study. In the U-M-led team’s simulations, warm years roughly doubled the volume of suitable habitat available to bighead carp in the spring and increased the volume of suitable springtime habitat for silver carp by nearly one-third.

“One of our key findings is that spring is the most affected season, and that’s when most of the fish species in Lake Michigan have their plankton-eating larval stages,” says study co-author Hongyan Zhang, an aquatic ecologist at Eureka Aquatic Research in Ann Arbor.

“Thus, climate changes and nutrient levels that favor Asian carp establishment may also enhance the negative effects of Asian carp on other fish species,” she says. Zhang, formerly of U-M’s School for Environment and Sustainability and the Cooperative Institute for Great Lakes Research, was Alsip’s thesis adviser.

Phosphorus levels emerged as the most influential of the three factors analyzed in the new study of Asian carp habitat suitability across Lake Michigan. The study’s “High P” scenarios resulted in the longest growing seasons for Asian carp, the greatest quantity of suitable habitat, and the highest final fish weights.

The high-phosphorus scenarios are based on Lake Michigan’s phosphorus loads in the 1970s and 1980s, when efforts began to reduce levels of the algae-promoting nutrient across the Great Lakes. The amount of phosphorus entering Lake Michigan from its tributaries declined sharply since then and has maintained a steady level since the 1990s.

Last year, the U.S. Army Corps of Engineers sent Congress a plan to install carp defenses at the Brandon Road Lock and Dam near Joliet, Ill., about 40 miles from Lake Michigan. The region’s eight U.S. governors and two Canadian premiers endorsed the plan. The project, which could cost more than $800 million, is awaiting congressional approval.
But previous research suggests changes in land use and river hydrology as a result of urban and agricultural expansion and climate change could increase Lake Michigan phosphorus levels in coming decades. The Great Lakes region already is experiencing more frequent intense springtime rainstorms that can wash phosphorus off land surfaces and into streams and rivers.

Any future increases in Lake Michigan phosphorus levels “would only create a more hospitable environment” for Asian carp, the new study concludes.

“The most interesting aspect of this study, to me, is that of the three stressors we considered, nutrient reduction to the lake — mandated by the Great Lakes Water Quality Agreement — has lowered habitat suitability the most for invasive bighead and silver carp,” says study co-author Ed Rutherford, a research fishery biologist at NOAA’s Great Lakes Environmental Research Laboratory.

The impact of Asian carp on already invaded ecosystems, as well as the proximity of the invasion front to Lake Michigan, have elevated concerns about the potential invasion of the Great Lakes via the Chicago Area Waterway System, the man-made connection between the Illinois River and Lake Michigan. A huge worry is that Asian carp might outcompete plankton-eating Great Lakes fish — which include the larval stages of most fish species — and devastate the region’s $7-billion fishing industry.

Last year, the U.S. Army Corps of Engineers sent Congress a plan to install carp defenses at the Brandon Road Lock and Dam near Joliet, Ill., about 40 miles from Lake Michigan. The region’s eight U.S. governors and two Canadian premiers endorsed the plan. But the project, which could cost more than $800 million, is awaiting congressional approval.

The other co-authors of the Biological Invasions paper are Mark Rowe and Doran Mason of NOAA’s Great Lakes Environmental Research Laboratory, Catherine Riseng of the U-M School for Environment and Sustainability, and Zhenming Su of the Institute for Fisheries Research, a cooperative unit of the Michigan Department of Natural Resources and the University of Michigan.