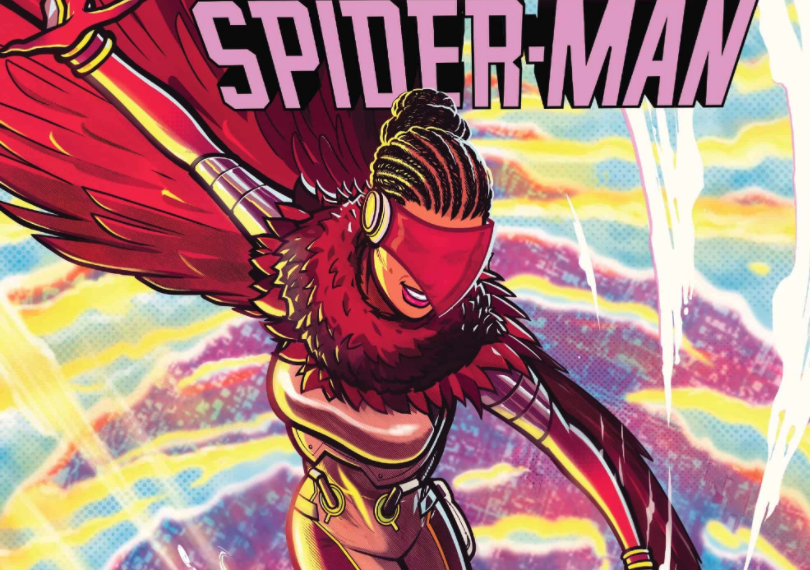 Just as our world devolves into a dystopia worthy of a comic-book thriller, award-winning writer Saladin Ahmed, ’99, dispatches two minority superheroes to the rescue.

Marvel Comics’ Starling (above) and Amulet are both from Michigan. They spring from the mind of Dearborn native Ahmed, who wanted to bring some hometown pride to the fantasy world.

“It’s not a small thing to introduce a hero to the Marvel Universe,” the artist says. Much like a superhero, “you have to build up the goodwill and the confidence.”

Starling is an African-American who hails from Detroit. She debuted in 2019’s Miles Morales: Spider-Man No. 5. Amulet is an Arab-American from Dearborn. He arrived in 2020’s The Magnificent Ms. Marvel No. 13. In addition to Spider-Man, these new crimefighters join legendary icons Iron Man, the Hulk, Thor, Captain America, Wolverine, Captain Marvel, and more.

And while most of these fictional characters operate in a version of the Marvel Universe’s New York, Ahmed decided to expand existing boundaries.

“I grew up a Marvel fan in Dearborn,” the writer says. “And I wanted to give the impression that there are other places these heroes could be from.”

Growing up around books 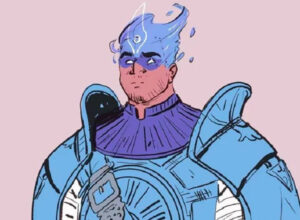 Amulet is a gentle giant from Dearborn. (Image: Marvel Comics.)

Looking back at Ahmed’s origin story, his journey to award-winning author seems predetermined.

His father, Ismael Ahmed, a 1977 graduate of UM-Dearborn, always “had tons of books around,” his son says. Ismael co-founded the Arab Community Center for Economics and Social Services (ACCESS) in Dearborn and served as director of the Michigan Department of Human Services from 2007-11 under Gov. Jennifer Granholm.

“He had long boxes full of them, and not just Marvel and DC stuff,” he says. “He was into the alternate publishers in the 1980s – Comico, Eclipse. As I got older, I started to read mostly fantasy. Frank Herbert’s Dune had a pretty big influence on me for its depiction of something that looked vaguely Arabic in the genre. Robert Jordan’s Wheel of Time series — I read those books over and over and over again when I was in high school.

“I was very lucky my dad had a self-educated curiosity,” Ahmed continues. “I’ve been a reader from a really young age. Any good writer has usually put in a lot of good years as an excessive reader. Also, my father was plugged into the creative community around Detroit, so I got to see a lot of interesting people and wanted to be interesting like they were.”

When his father took him to a reading by legendary Detroit poet Kim Hunter, Ahmed was forever changed.

“Just seeing what he could do with words, how they affected people – that’s power,” the writer says. “That’s what I wanted to do.”

Throne of the Crescent Moon 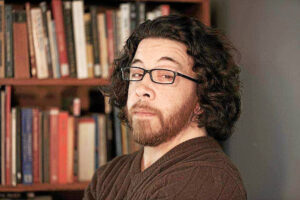 The aspiring poet decided it was time to study “literature with a capital ‘L.’” So he set aside his science fiction and fantasy books to pursue an MFA from Brooklyn College.

“I spent several years writing and selling poems in anthologies and little magazines, but the audience for poetry was very, very small,” Ahmed says. “Then I ran into a friend who was an experimental playwright; she told me she was writing a romance novel, which she always wanted to do.”

He realized in that moment that he really wanted to write a fantasy novel. Ahmed completed the Taos Toolbox writers workshop, a two-week masters-class for science-fiction/fantasy writers run by prominent author Walter John Williams, and started banging away.

“That seminar opened it up for me because I met a lot of people who had friends in New York that were science-fiction/fantasy writers; I got plugged into that circuit,” he says.

Soon Ahmed was making contacts, selling short stories, and gaining acclaim. “The Hooves and the Hovel of Abdel Jameela,” published in the anthology, Clockwork Phoenix 2: More Tales of Beauty and Strangeness, was nominated for the 2010 John W. Campbell Award for Best New Writer and the 2009 Nebula Award for Best Short Story. He would earn more notice with his debut fantasy novel, Throne of the Crescent Moon (DAW Books, 2012), described as “Arabian Nights meets Lord of the Rings.” Throne won the 2013 Locus Award for Best First Novel. It also was nominated for the Nebula Award, the British Fantasy Award, and the Hugo Award.

Ahmed’s foray into writing comic books came via  Marvel’s Black Bolt, an obscure character created by founding fathers Stan Lee and Jack Kirby in 1965. Ahmed would write the character’s first eponymous series, which made Entertainment Weekly’s “Best of 2017” list. He also has written Marvel’s Quicksilver: No Surrender and The Exiles, as well as BOOM! Studios’ Abbott, about a hard-nosed female reporter in 1970s Detroit.

When Hugo winner G. Willow Wilson approached Ahmed to succeed her on writing Marvel’s Kamala Khan (alias: the third Ms. Marvel), Ahmed was intimidated. Wilson had co-created the popular Pakistani-American teen from New Jersey and had won the 2016 Dwayne McDuffie Award for Diversity in Comics. (McDuffie, BA ’83, was co-founder of the pioneering minority-owned-and-operated comic-book company Milestone Media.) Upon further consideration, though, Ahmed realized one doesn’t become a full-fledged superhero until more than one writer has told your story.

“That is why we love Batman, Spider-Man, and Superman so much,” Ahmed says. “So many different people have interpreted them. It’s part of a rite of passage. Willow had been writing Kamala Khan for five years and wanted some fresh energy on the character.”

Write where you know 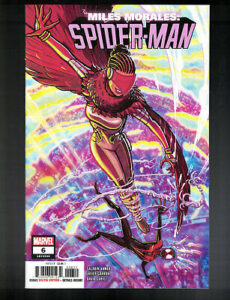 The character Khan got that fresh energy, as well as a new friend. Fadi Fadlalah, Amulet’s alter go, is an Arab-American Muslim who partners with Ms. Marvel (Kamala Khan). Ahmed collaborated with Jordanian-American artist Sara Alfageeh, of Boston to visualize the gentle giant, a former defensive tackle who quit football after hurting someone.

“I knew from the beginning I’d like to introduce an Arab-American hero,” Ahmed says of the mystical defender Amulet. “When I proposed this idea to the Marvel brass, everybody was very excited and supportive.

“When I [conceived Amulet], I knew I wanted the design to be based on the Nazar, which is a protective symbol across the Middle East and the Mediterranean,” he continues. “For that to work, I needed an artist to understand the cultural significance and context.”

Alfageeh surprised him by deviating from the traditional superhero get-up to create a magical-looking armor-based design.

“It was quite different from what I imagined. It’s perfect for the character.”

The next generation of heroes 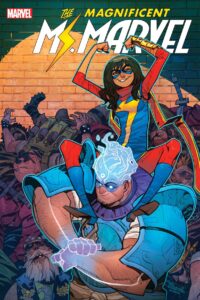 Kamala Khan is one of Marvel’s most popular characters in recent several years and represents a new generation of Marvel players. She’s Marvel’s first and most prominent Muslim character, as well as Marvel’s first South Asian character.

“People from all walks of life have really latched on to Kamala,” says Ahmed. “The reason they’ve done so is she’s a prototypical Marvel super-hero – she’s this teenager facing an uphill battle in the world and trying to do what’s right. Despite all the bombastic, super-hero stuff happening around her, there’s a very human story at the core of it. There’s some universality to those stories regardless if you’re a white teenager from Queens like Peter Parker (Spider-Man) or if you’re a South Asian kid from Jersey City.”

Or an African-American girl from Detroit. The alter-ego of Ahmed’s popular Starling, Tiana Toomes, is the teenage daughter of a single mother in the Motor City. She also is the granddaughter of the classic Spider-Man villain the Vulture (also known as electrical engineer Adrian Toomes). Vulture mentors the girl to make up for his deadbeat son, only to see Starling become the newest ally to Miles Morales’ Spider-Man. Morales is an Afro-Latino teenager who first appeared in the Marvel Universe in August 2011.

Ahmed is thrilled to see these minority characters populating the Marvel universe. And he was especially excited to introduce Amulet to the world of comics. The Arab-American character will next appear in Outlawed, a Marvel crossover event, in which teenage superheroes are outlawed.

“When you go to write a character, you can do whatever you want with them,” Ahmed says. “It’s thrilling to make your own action figure, so to speak, and be able to add it to the toy box. I hope one day, other writers will pick up Amulet and give him adventures.”