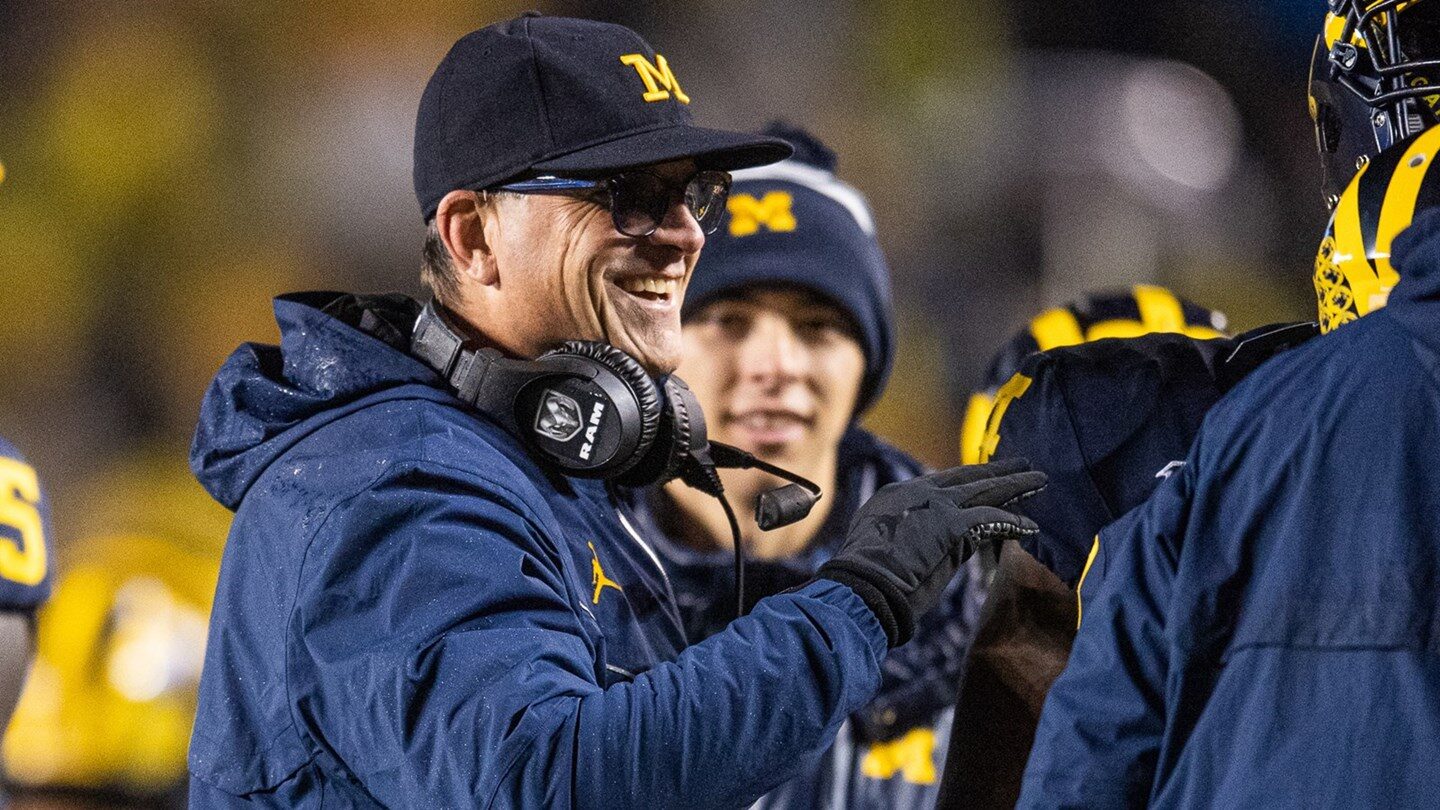 “I continue to believe that Jim is the right man to lead our program in pursuit of Big Ten and CFP championships,” says Manuel, the Donald R. Shepherd Director of Athletics. “Our program didn’t achieve at a level that anyone expected this year, but I know those setbacks will drive the coaches, players, and staff moving forward. Jim is a tireless worker and competitor. Following the completion of the season we talked for many hours on what it will take for Jim to lead and get us back on the right trajectory.”


Jan. 23: A pause for Michigan Athletics
Under a Michigan Department of Health and Human Services (MDHHS) decision made Jan. 23, the University of Michigan Athletic Department paused athletic activities in all sports, including games and training sessions, until further notice, and up to 14 days. Continue reading.
“Jim loves the University of Michigan and this football program. He has been committed to this university, athletic department, and football program since his days as a player and returning in 2015 as the head coach. He wants to do everything possible to build a championship football team while graduating our student-athletes. We all need to do our part to continue to help in that pursuit as it takes everyone pulling the same direction to have a championship-level program.”

“My thanks to Athletic Director Warde Manuel for the trust that he has shown in allowing me to continue to coach the University of Michigan football team, and to President Mark Schlissel and the Board of Regents for their ongoing support,” says Harbaugh. “My additional thanks to Doug Gnodtke, our football staff, and those departments on campus who continue to support our mission. Over the past few weeks, Warde and I had discussions that have been honest, open, insightful, and constructive in moving our football program forward. Discussions that I look forward to continuing over the months and years ahead. We have a plan.

“There is work to be done and challenges to be addressed. These challenges are being addressed as we continue to strive for excellence in the classroom and championships on the field, a message that I hope is noted in the language of our agreed-upon contract.

“Thanks to our University of Michigan players and their families who have placed their trust in our program and our goals. All our energy and focus is directed toward laying an outstanding foundation for the 2021 football season.”

Harbaugh has guided the Wolverines to a 49-22 overall record and 34-16 Big Ten record during his six seasons leading the Michigan football program. He has led U-M to three 10-win seasons and has guided teams to five bowl games, including two New Year’s Six bowls and three New Year’s Day bowl games.

While U-M has worked diligently on testing and reporting within state and Big Ten Conference guidelines, the Michigan Department of Health and Human Services is mandating a more aggressive strategy for this B.1.1.7 variant, which exceeds current program efforts designed around the standard form of the virus.

Additionally, Butt won the Mackey Award as the nation’s top tight end in 2016 while Peppers received the Lott IMPACT Trophy, Paul Hornung Award and was a fifth-place finisher in the Heisman Trophy race that same season. Several other athletes have been national award finalists under Harbaugh, including Lewis (Jim Thorpe Award) and Bush (Butkus Award).

Dec. 17, 2020: Harbaugh Talks Football Signing Day with Jon Jansen
Harbaugh’s teams at Michigan have finished the season ranked in the national polls on four occasions, including a No. 10 season-ending ranking in 2016, when the Wolverines came within inches of claiming their first Big Ten East Division title and a spot in the conference championship game in 2016. U-M has finished the season as a top-15 team three times in Harbaugh’s tenure.

Under Harbaugh, Michigan has produced two of the five most productive offensive seasons in school history. U-M has had a top-12 national defense in five of his six seasons and a top-three unit on three occasions.

Harbaugh is in the process of evaluating and putting together his staff for the 2021 season.


(Chad Shepard also contributed to this story, which originally appeared Jan. 8, 2021, at mgoblue.com.)