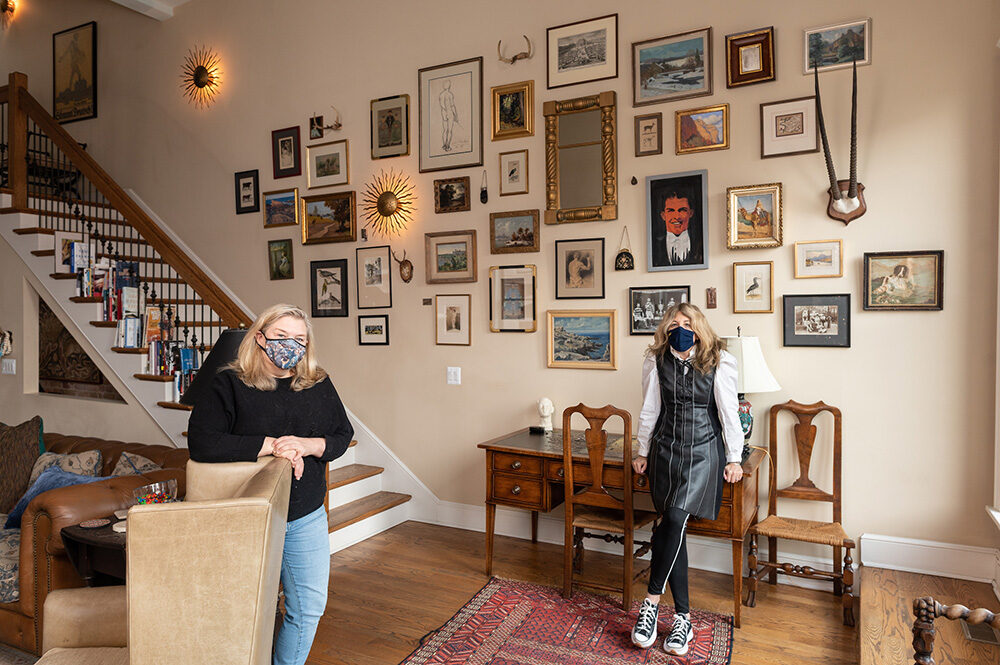 “The selfsame well from which your laughter rises was oftentimes filled with your tears. And how else can it be? The deeper that sorrow carves into your being, the more joy you can contain.” – Kahlil Gibran

Poet/philosopher Gibran captures this breathtaking paradox of love and loss in his 1923 collection of prose, The Prophet. It’s a comforting reminder in times of sadness that “your joy is your sorrow unmasked.”

In the downtown Ann Arbor apartment of filmmaker Amy Moore, BA ’83, sorrow has been thoroughly unmasked. It is now arranged in a joyful, multi-textured installation that celebrates Moore’s best friend, designer/decorator Lance Lawlor, MFA ’75. He passed away from lung cancer in April 2020.

Lawlor’s life force can be felt everywhere in the light-filled space he designed for Moore, which features exposed brick, working fireplace, turret, and rooftop pergola. “Whenever anybody compliments my ‘amazing taste,’” she says, “it’s really his. He often would say to his clients, ‘You’ve got two choices and one of them is wrong.’” 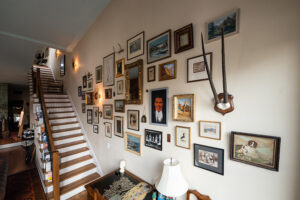 As an interior designer, the Stamps School graduate counted commercial and residential clients from California, Florida, Connecticut, Chicago, Mexico, and Michigan. He worked with the Iroquois Hotel on Mackinac Island for 18 years, and enjoyed costume design, floral design, furniture restoration, and decorative painting. Early in his career, he designed costumes for the Ann Arbor Civic Theater and U-M’s Gilbert & Sullivan Society.

“He was just this lovely guy who everybody adored, a gentleman of impeccable taste,” Moore says. “But he was very compartmentalized and very, very private in that way gay men of an ‘older generation’ could be. He was reserved in what he released about his life.

“He was also that person who understood and accepted you,” she continues. “He always sent the perfect gift. I called him one time and said, ‘I need to get a bow for a package,’ and he’s like, ‘Oh, I’m outside your door with bows.’ I laughed and thought, ‘Does he just drive around with a car full of bows?’ And I think he did. He was just that kind of guy.”

At the time Lawlor succumbed to lung cancer in April 2020, Moore was his primary caretaker and trustee. Options for in-home hospice care were suspended due to COVID-19 and she would have limited access to him if he entered a facility. The emotional toll was made worse by the fact they were not family and she knew so few of his other friends. There would be no ceremony after he passed. Closure was not part of the equation. 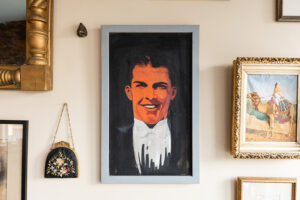 After his death, Moore discovered the artist was a “bit of a hoarder” who collected all manner of photography, furniture, textiles, and clothing. Agencies bound by COVID protocols couldn’t accept the countless items she needed to process, including some 200 shirts in their original packaging. So she curated and mailed “very large packages” to at least 50 of Lawlor’s friends and family members, many of whom she had only met via text upon informing them of his death.

In addition to his outsized wardrobe, Lawlor owned a seemingly endless supply of framed art. Moore was captivated by the pieces that so clearly expressed his snarky humor and quirky eclecticism. An antique photograph of chubby men in bathing costumes made her laugh. A poorly sketched male nude spoke volumes. Creepy portraits and blurry landscapes held unmistakable allure.

She knew she had to keep some of them, so she enlisted her friend and expert, Amanda Krugliak, BFA ’84, artist and curator at U-M’s Institute for the Humanities. Krugliak has presented some of the most compelling installations at U-M of late, most recently working with artist Ibrahim Mahama during quarantine to cloak the University of Michigan Museum of Art in jute sacks for the installation “In-Between the World and Dreams.” She is a former board member of the Ann Arbor Film Festival and currently serves as an advisory board member. 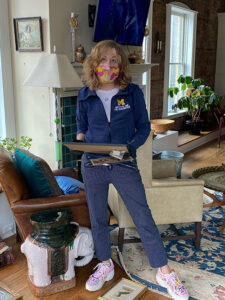 At first, Krugliak was reluctant to join Moore in a stranger’s Ypsilanti basement. “I didn’t know if it was OK to go in that house, let alone leave my own house,” she says. But the lure of a new project was tempting, and she found purpose in Moore’s loss.

“I always come to a project from the outside in,” Krugliak says, noting artists often need a collaborator to create a cohesive collection. “Amy was in the middle of grieving for this person and it would be difficult for her to make decisions about what to keep. That made me feel tremendously useful at a time when I felt like the world was falling apart.”

It took three masked and efficient trips to Lawlor’s home for Krugliak to sift through the homoerotic drawings, whimsical photography, and bizarre portraits. Moore watched as Krugliak pieced together a narrative: “Five minutes in, Amanda’s process was like, ‘Yes. Yes. No. Take that. Leave that.’”

Each discovery revealed clues to Lawlor’s personality and Krugliak grew increasingly tender toward him.

“I think our greatest hope is that we leave something of ourselves behind, right? Some kind of proof, an imprint that we were here, that we existed,” she says. “I feel like I know him now.”

Moore filled in the blanks, speculating why Lawlor may have chosen that pair of mounted antlers or purchased this “metal thing that looks like a sun.” They grabbed a bronze nose, a Shining-esque portrait bordering on bad taste, and a gilded mirror.

Moore and Krugliak encourage others to create art installations at home. Don’t be intimidated, Krugliak says. It need not be some huge masterpiece. (And those are not rugby outfits in the video below, Amanda.)

“I hope we captured something that felt as if it had a lot of surprises in it,” Krugliak says. She was mindful of having a “light touch,” only seeking to pull out the nuances and subtleties someone close to Lawlor may have overlooked. It’s similar to how she interacts with artists and it challenged her to reflect on the “rarefied” nature of her career. 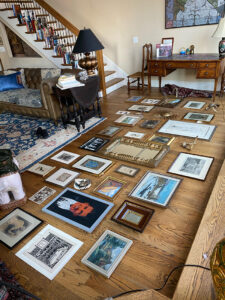 “What is this thing called ‘curation?’” she says. “This project with Amy did not feel rarefied at all. It was so much more meaningful than a gallery exhibition or the art world. It helped me to sort out ‘What do you do – and what is its value?’”

Moore is delighted with the dramatic, physical result, which consumes the biggest wall in her apartment, ascending to the second floor. For all the installation’s inherent humor, Krugliak brought a sense of eclectic style and sophistication worthy of Lawlor’s legacy, she says.

“Amanda put the pieces together in this mosaic of humanity. It’s really admirable.”

The installation also represents the women’s friendship. Since Lawlor died at the beginning of the pandemic, Moore and Krugliak formed a COVID pod and began sharing Sunday dinners. They chose to hang a small beaded purse Krugliak had given Moore as a way to sign the project. 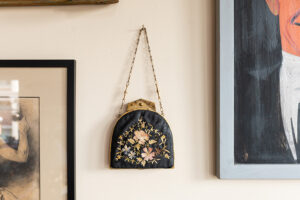 The women chose to hang this purse to offset all the male energy in the installation. (Image: Austin Thomason, Michigan Photography.)

“We needed something feminine to soften the energy a bit,” Moore says. “It balances out the antlers.”

Today the tangible artifacts provide solace and soften the memories of Lawlor’s painful final days. It was he who soothed Moore years ago when she wasn’t exactly keen to settle down in territory as familiar as Ann Arbor. Family obligations had hastened her “home” to care for her elderly mother, who has since passed away.

Staying in one place has never been in her nature. Moore caught the wanderlust in the early ‘70s when her father moved her family from Birmingham, Mich., to Tokyo. They returned to Michigan as Moore entered high school, but her imagination extended far beyond suburban Detroit. At U-M in 1982, she won a hotly contested election as president of the Michigan Student Assembly. Then she went on to pursue an award-winning international career in entertainment as a writer, producer, and creative executive, most notably on HBO’s 2009 series, “The No. 1 Ladies’ Detective Agency.” The production took her to Botswana where she oversaw a crew of thousands and worked alongside directors Anthony Minghella and Sydney Pollack.

Moore is on the board of the Ann Arbor Film Festival and looks forward to entertaining again. She feels new energy in her home, and she’s convinced it’s generated by the installation.

“It’s not a memorial,” she says. “It’s the artistic beauty that came out of this terrible situation. This experience infused so much life into this time. It’s been a real gift.”