See half a century of U-M football 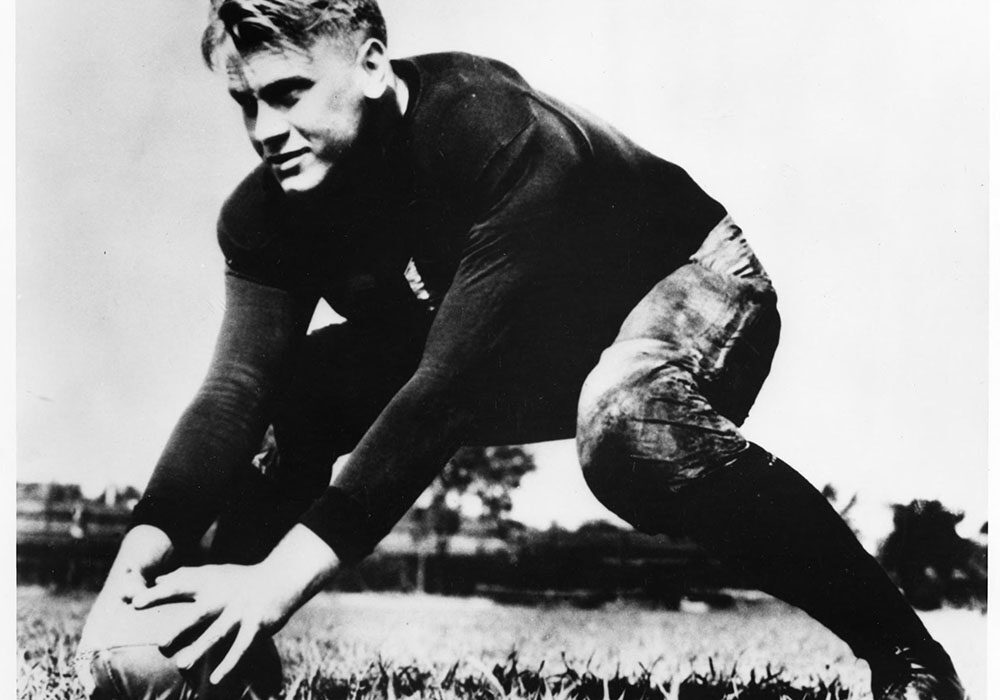 Wolverine fans are reclaiming their seats in Michigan Stadium to enjoy live game action for the first time since 2019.

And while some fans look to the future, others will be thrilled to look back, thanks to a digital project led by Greg Kinney, archivist at U-M’s Bentley Historical Library. The Bentley and its external partners recently completed digitizing game film from 55 years of Michigan Football. The 420 games played between 1930-86 may be viewed for free at the library’s website.
“I’m not a diehard fan like some people, but I certainly enjoyed doing it,” says Kinney, who annotated each film with details and timecode. Viewers can jump to specific plays by beloved quarterbacks like Bob Timberlake, Rick Leach, Jim Harbaugh, and more.

Kinney and the preservation team executed the project just in time; some of the film was so delicate it could barely run through a projector without being destroyed.

“The Bentley has become a real source of the history of Michigan Athletics, so this seemed like a logical thing to do right now,” Kinney says.

Over the course of two years, Bentley archivists, technicians, and students selected the best copy of each game. They cleaned and spliced the 16 mm film reels, rehoused them in new archival canisters, logged them in a database, and packaged them for digitization.

Since the existing play action was recorded as game film for the use of U-M coaches, the footage has no audio. The digitized playing time is condensed to 25-45 minutes. Each film is linked to supporting information and viewers will find annotations for scoring and other significant plays — like Ron Johnson’s five touchdown runs in the 1968 Wisconsin game, or the Harbaugh-to-Kolesar touchdown pass against Ohio State in 1985.

“There’s about 10 seconds of Gerald Ford in 1933, but you have to look really close to see No. 48,” Kinney says. “And then there’s nothing from the 1934 season, which was a year the team only won one game. We’re not sure if it’s coincidental, but there’s no film that year.”

As Kinney’s viewing progressed through the years, he noted an improvement in the camera operators’ techniques.

“In the early days it was hard to follow the ball on a punt play,” he says. “They would sometimes just follow the shadow on the ground and then pick it up at the receiver.”

It’s all there in black & white

In the days prior to network television coverage of college football, leaders in the Alumni Assn. often shared films with club representatives to allow faraway grads to partake in game activities. Modern-day fans can now do the same, since the Bentley’s access page provides a link to full Michigan team rosters for each season as well as links to coverage by The Michigan Daily and Michigan Alumnus. The box scores and play-by-play rundowns for each game also are provided when available.

Ironically, some of the team’s most historic players and plays have been excised – literally cut out — from original film to produce highlight reels for past coaches or broadcasters. In some films, including games featuring the legendary Tom Harmon, the film includes the set-up for a play, only to jump to the extra point. No touchdown.

“Luckily we had duplicate films and could go stitch those [Harmon] plays back in,” Kinney says.

But sadly, some of Billy Taylor’s most thrilling ’70s-era touchdowns are missing. Kinney hopes the archivists will track them down eventually.

The Bentley’s access page provides a link to full Michigan team rosters for each season as well as links to coverage by The Michigan Daily and Michigan Alumnus. The box scores and play-by-play rundowns for each game also are provided when available.
Kinney sees many uses for the film beyond research and Athletics. Broadcasting students can produce voiceover commentary, modern-day alumni clubs can invite local players to showcase highlights, and fans can run them at tailgate parties. Going forward, Kinney says it will be much easier to access specific clips when requested.

Former players have reported how fulfilling it is to watch the digitized games, reliving glory days and revisiting friends who’ve since passed away, says Kinney.

“They’ll say stuff like, ‘Well, now my kids and grandkids will have to believe me when I tell him I played Michigan football,'” he says. “George Hoey (1966-68) wrote me a note about how great it was to see those old plays and to remember some of his teammates he hadn’t thought of in years.”

A final batch of 125 additional games were delayed during Covid-19 and will be added to the site when they are finished. By the end of the year, Kinney expects to make available game footage through 1992. The original films have been retired to the Bentley’s cold storage room.