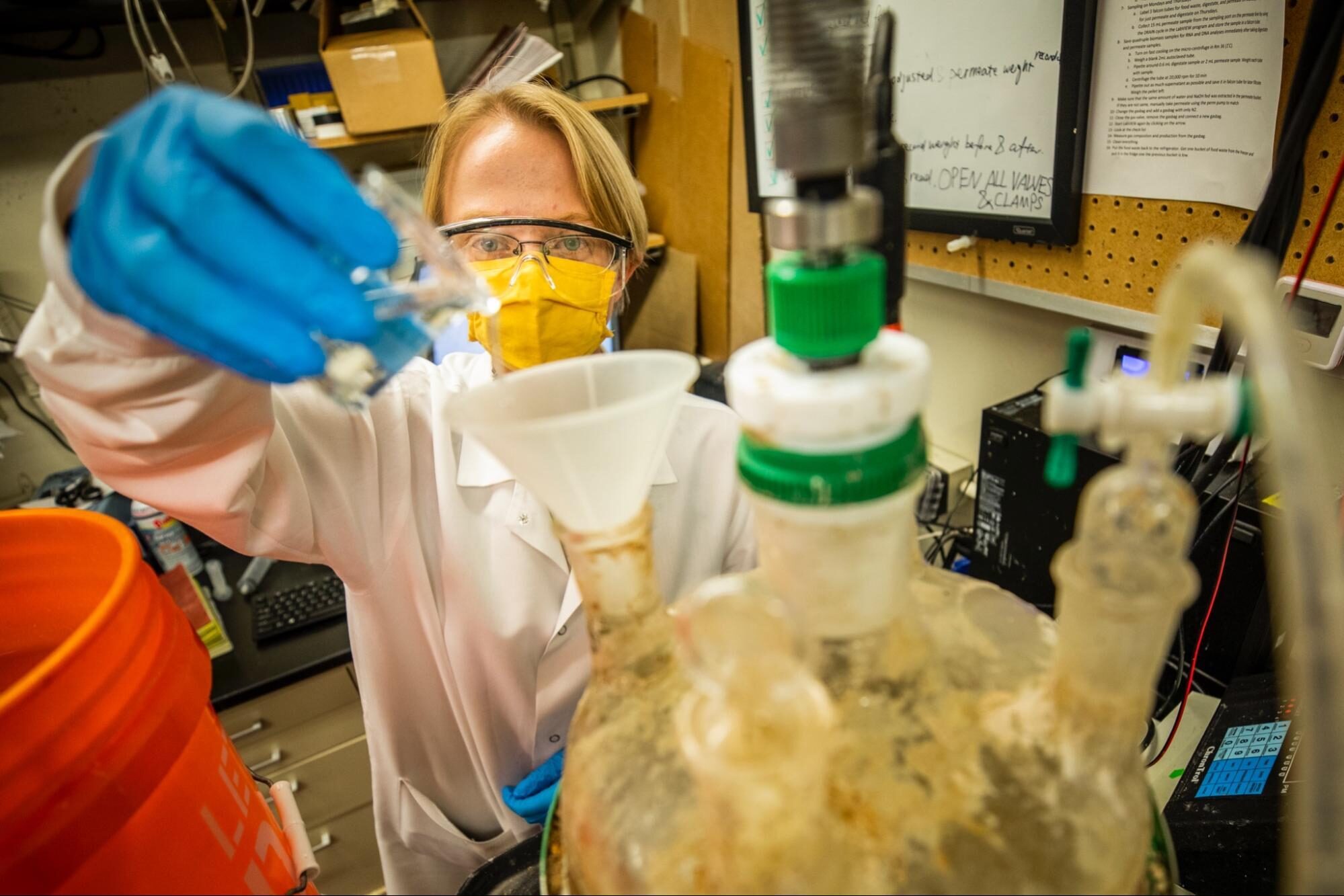 Waste not, want not

Cattle are supremely efficient at digesting tough materials. Now, a proposed energy-production system based, in part, on cow stomachs could generate 40 percent more power from municipal waste streams, at a 20 percent reduced cost — and provide a viable alternative to sending waste to landfills.

That’s the goal of a $6.8 million effort to crank up the efficiency of how we convert organic solid waste from trash and wastewater into methane, a pipeline-ready renewable fuel. Led by U-M, the project includes partnerships with Argonne National Laboratory, Northwestern University, and others. The U.S. Department of Energy is providing $5 million of the funding.

“We believe we’ve come up with a highly scalable solution to match the needs of an urbanizing world.” — Steve Skerlos

“It’s time for us to shift our thinking as a society. These organic materials are only waste in the sense that we bury them at landfills or compost them. We’re throwing away valuable feedstock. We believe we’ve come up with a highly scalable solution to match the needs of an urbanizing world,” says Steve Skerlos, an Arthur F. Thurnau Professor and professor of mechanical engineering at U-M. He is a co-principal investigator on the project.

The endeavor, headed by Lutgarde Raskin, the Vernon L. Snoeyink Distinguished University Professor of Environmental Engineering at U-M, goes beyond developing technology to building a collaboration that will deploy the system in society and educate the workforce needed to operate it.

Methane, the main component of natural gas, can be produced by bioreactors that take in the organic matter produced in our homes — human wastes we flush down our toilets and food wastes that disappear down our kitchen disposals or in trash cans. Today, it’s not a particularly efficient process, and state-of-the-art bioreactors have only a narrow band of materials they can break down.

Beyond that, methane is a byproduct of decaying organic waste at landfills, where it is released into the atmosphere. It is a potent greenhouse gas, so capturing more of it for energy production could be a double climate win.

“Over the course of the next decade, the technologies, design and operational strategies, and educational programs in this project could lead to a doubling or more of power generated from food waste in the U.S.,” Skerlos says. 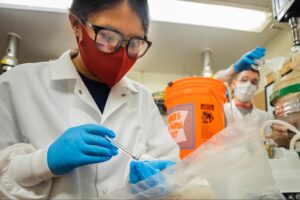 Renisha Karki, a graduate student research assistant, is part of a team working on a new biodigester that converts organic solid waste from trash and wastewater into renewable methane. The digester mirrors the ability of a cow’s stomach to efficiently break down substances. (Image credit: Robert Coelius/Michigan Engineering.)

Researchers at U-M set out to expand the types of organic waste materials that bioreactors can break down beyond food waste and wastewater sludge, and that’s why they looked to nature for inspiration.

“A cow’s stomach is really good at degrading lignocellulosic material — things like the grass and hay that cattle eat,” Raskin says.”Those materials can’t be digested by the anaerobic bioreactors commonly used today. We’re looking to develop a new bioreactor that can also digest yard waste and paper waste.”

The cow stomach (rumen) bioreactor represents one part of a two-phase anaerobic bioreactor system, called anaerobic because it doesn’t require oxygen. The first, rumen bioreactor converts organic waste into simpler compounds like acetic acid, the main component in vinegar. The second reactor converts those simpler compounds into methane. Their combined footprint is much smaller than typical bioreactors now in use, making them more affordable to build and operate, the researchers say.

U-M’s system is able to efficiently generate biogas—a mixture of methane and carbon dioxide. Converting that to pipeline-ready renewable methane is the job of researchers at Argonne National Laboratory and Northwestern University. They’re developing a system that converts the carbon dioxide in the biogas to methane as well.

All three aspects of the project will start and progress separately at first. A lab-scale assembly of the integrated system will be hosted by Argonne. Later, a pilot system will be built at the Great Lakes Water Authority (GLWA) water resource recovery facility in Detroit.

Utilities like GLWA’s recovery facility stand to benefit since they do not currently have systems to recover energy from the sewage sludge and organic wastes they produce. In keeping with GLWA’s goal to become energy neutral, the pilot program run by the utility’s personnel will be crucial to establishing that the system can be implemented full scale. 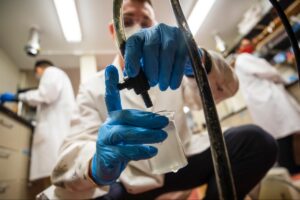 Tim Fairley-Wax, a research lab specialist associate, is working on a new biodigester that converts organic solid waste from trash and wastewater into renewable methane. The digester mirrors the ability of a cow’s stomach to efficiently. (Image credit: Robert Coelius/Michigan Engineering.)

A key component of the project is its creation of a research and education collaboration to help train graduate and undergraduate students for a next-generation bioenergy technology workforce. Educational partners include the University of Toronto, the Universidad Nacional Autónoma de Mexico, and the Universidad de Monterrey. At U-M, the project will partner with the University’s Center for Socially Engaged Design.

“This systematic approach is vital to assuring that waste-to-energy technology is not only viable, but that it is deployed throughout North America and beyond,” says Skerlos.

This project may use U-M technology that is optioned to Aquora Biosystems, Inc. Skerlos, Raskin, and Fairley-Wax are co-founders with financial interests in the company.

The project is funded by the Bioenergy Technologies Office of the DOE. Another $1.8 million for the project comes from matching funds provided by the GLWA, the consulting firm inCTRL Solutions, Carollo Engineers Inc., and others. Roughly $5.2 million will be used and distributed by U-M while Argonne National Laboratory will receive $1.6 million.