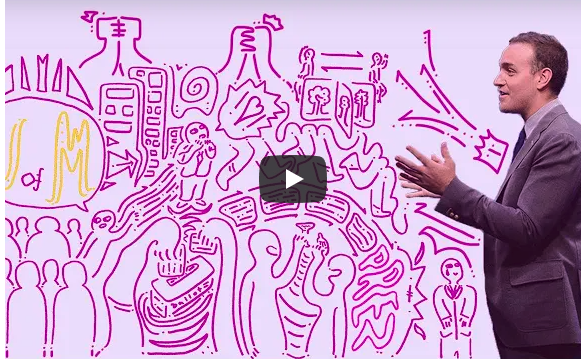 Was that a knock at the office door?

LGBTQ+ advocate Syd Lio Riley (he/they/ze) wasn’t sure. Visitors were rare these days, even after the Michigan Union re-opened under COVID-19 restrictions. 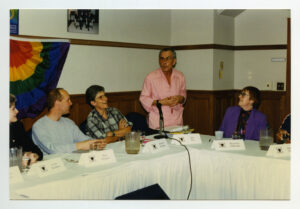 Riley was alone in the office, deep in the throes of an oral history project to commemorate the 50th anniversary of the Spectrum Center’s founding. They opened the door to a group of people who hoped to tour the center’s renovated space in the Office of Student Life. The visitors explained they were in from out of town. And then a gentleman introduced himself as the brother of Spectrum Center founder Jim Toy.

The student leader had never met the revered gay rights leader Toy, MSW ’81. But Riley had heard many of the center’s oral history participants speak about his legacy. Now 91 and retired, Toy’s far-reaching influence still informs student efforts to bring representation and justice to the LGBTQ+ community at U-M and beyond.

Meeting the icon’s brother validated the mission Riley hoped to achieve by working on the University of Michigan LGBTQ+ Oral History Project.

“It was amazing to have this really lovely conversation about the pride Jim’s brother feels for his achievements,” Riley says. “I have a younger sister, and hearing that pride in one sibling for the advocacy they were doing was so moving. I know that family relationships can be so challenging when you’re queer; sometimes the most intense battles you experience are the ones in your own home.”

“There’s such a beautiful element of queer ‘chosen family’ that can happen through oral histories. It allows people to find a sense of themselves rooted in history that you might not find in your family tree. That’s the part of this project that really stands out to me.” — Syd Lio Riley
Riley is a member of the class of 2022. Ze is completing his BA in sociology and American culture while beginning his Master of Social Work through the Sociology Department’s 4+1 program. Through the oral histories, Riley and fellow students hope to create a queer sense of intergenerational connection, while elevating LGBTQ+ voices and experiences.

Eryka Swank, BS ’20, initiated the three-year audio project in 2019 and established best practices regarding interviewing, storytelling, and curating the content. To date, project participants have interviewed 27 Michigan alumni of diverse ages, racial and economic backgrounds, and ability statuses. Some subjects were at U-M for the founding of the Spectrum Center, others graduated last year.

“One aspect of the queer community that we talk about a lot is having ‘queer elders,’ because we’re a marginalized group that is not necessarily genetically related to each other,” says Riley, the project’s current team lead. “But you can listen to the story of a person and think ‘this person could be my grandfather, this person could be my cousin.'”

“There’s a natural sense of connection between people when you can hear somebody’s story being told in their own voice.” — Syd Lio Riley

Full-length histories are accessible at the Spectrum Center website and the Bentley Historical Library. Sample three histories below.

As queer elders go, Michigan students hit the intergenerational jackpot with Toy. He became one of the most influential gay advocates in the state after he came out publicly at an anti-Vietnam War rally in 1970. He helped pioneer the University of Michigan’s Human Sexuality Office, the first staff office in the U.S. for queer students in an institution of higher learning. In 1972, he co-authored the “Lesbian-Gay Pride Week Proclamation,” making the Ann Arbor City Council the first governing body of its kind in the nation to officially recognize Gay Pride. (Read more about Toy. His list of accomplishments is far too long to print here.)

Toy’s public appearances have grown increasingly rare with age. But the movement he began as a member of the Gay Liberation Front five decades ago continues to expand. The Spectrum Center provides a home base that delivers programming, support, resources, and most importantly, consistency among constantly changing student personnel and volunteers.

Riley, 21, came out nearly 10 years ago and already is a seasoned LGBTQ+ advocate. As a high school sophomore, they founded their school’s gay-straight alliance and ran a popular Instagram account for LGBTQ youth. Since arriving on campus ze has advocated for accessible, gender-inclusive bathrooms in residence halls and classroom buildings and has marked incremental, though significant victories. Systems-level change is the next big goal.

“There are teenagers right now who are doing incredible work that I couldn’t even begin to conceptualize,” Riley says. “Having a space for youth empowerment and advocacy is so important, and I’m very excited to see what the next generations will be bringing.”

While the oral history project provides agency to marginalized communities, it also preserves an accurate record of their lived experiences, Riley says. Some anecdotes may not even be “queer stories,” but rather “everyday moments that queer people go through and the very complex lives they lead, in addition to the identities they hold.”

All of the interview subjects involved in the oral histories are still living. In a recent round of interviews, questions touched on the current iteration of Black Lives Matter, the legalization of same-sex marriage, and COVID-19. The team is gathering the histories as they happen, Riley says.

“A lot of history [about marginalized people] is told from the very stereotypical perspective of cisgender, heterosexual white men in power,” he says. “This [project] allows the community to have a sense of agency about what stories are told, the way they are told, and which stories are being preserved. We are not just interviewing LGBTQ+ people but are seeking the voices within that community that continue to be suppressed.”

Syd Lio Riley uses all three pronouns: he/they/ze interchangeably in this article. Their reasons are explained here.
Xochi Maja Sánchez is the artist who designed the oral history artwork, featured in the lead image of Christopher Armstrong.