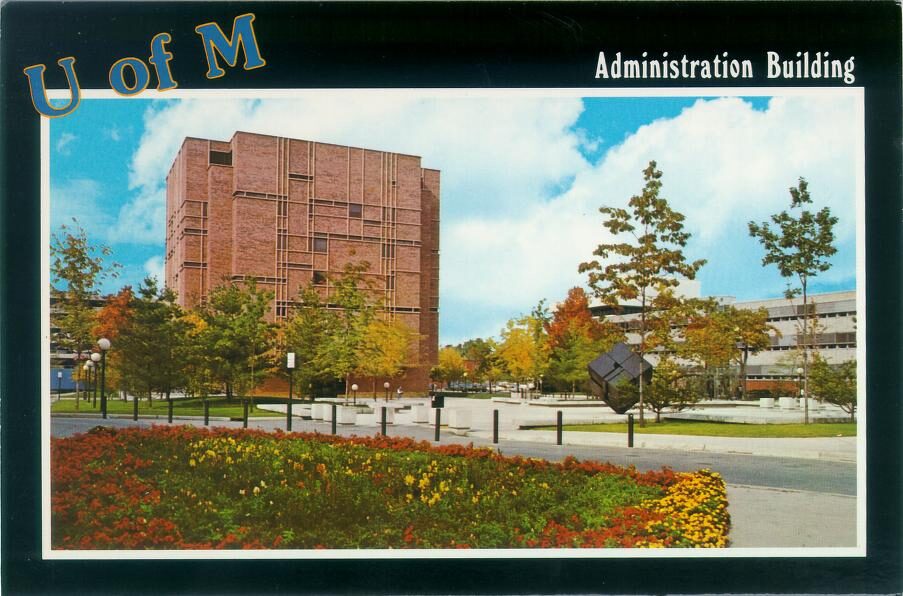 President Mark Schlissel, his vice presidents, and their staffs are preparing to depart the Fleming Administration Building for new headquarters. Next year, they will cross the Diag to remodeled offices in the old Ruthven Museums Building, the one with the black stone pumas in front and the dinosaurs inside. The pumas and dinosaurs already have moved across the street to the Biological Sciences Building, which is home to U-M’s Museum of Natural History. And “Fortress Fleming,” the brown-brick blockhouse where the administration has run the University for 50 years, will return to the dust from whence it came. 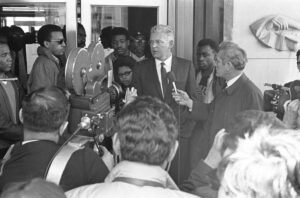 During the turbulent ’60s and early ’70s, President Robben Fleming was a skilled diplomat when the University needed one. (Image courtesy of U-M’s Bentley Historical Library.)

No one I knew ever liked it much. When I heard it was on the schedule for demolition, my only twinge of regret had to do with Robben Fleming. As president of the University from 1968-79, he navigated U-M through the mayhem of the 1960s and ’70s in one piece. He was a friendly and decent man who seemed to genuinely like students, even when they were yelling at him.

He was a good guy to name a building for. But not that building.

In fact, said one of his successors, Lee Bollinger, who admired Fleming: “Never has a building been more ironically named. No University administration, at least not one that seeks engagement, should reside in such a bunker-like, repelling structure.”

The entrances are little and uninviting. Most of the windows are slits at the level of the ceiling or floor. People have said for years it was designed as an actual fortress to protect administrators from marauding student protesters. Even the tour guides say that. But it’s an urban legend. The building was designed years before students started taking over buildings.

Still, Bollinger was right. It looks like a bunker. Yet it was designed by a gentle man of deeply humane taste whom the architectural superstar Frank Lloyd Wright called his “spiritual son.” 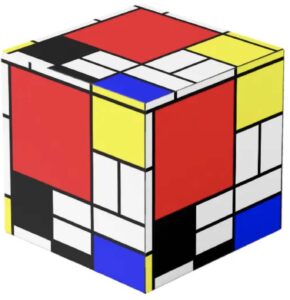 The architect was Alden Dow (1904-83), who grew up in Midland, Mich., as the son of Herbert H. Dow, founder of the corporate colossus Dow Chemical. Alden Dow majored in engineering at Michigan for three years, then begged his parents to let him transfer to Columbia to study architecture. He took further training in Wright’s studio. Family connections helped with design contracts, as did his connection to Wright. Major awards soon followed, and his renown spread.

The designs that Dow drew for private homes are lovely and inviting, with big windows and lots of light. They seem to flow into and out of their landscapes. (He once said: “Gardens never end, and buildings never begin.”) You can see the kinship to Wright. But his public buildings, at least the ones in Ann Arbor, seem much less welcoming. The Institute for Social Research and the Larcom Municipal Building do arrest the eye. But you don’t especially want to go inside.

For the Administration Building, Dow took his inspiration from the Dutch painter Piet Mondrian (1877-1944), a founder of the modern art movement. Mondrian’s work became so abstract that he wound up painting simple geometry — lines, squares, rectangles.

Look at any side of the Fleming Building and you’re seeing a version in brick of a Mondrian painting. (According to one of Dow’s biographers, “the original proposals had windows and colored squares and rectangles in a white stucco surface,” and if he hadn’t been vetoed, Dow would have made the windows blue with maize trim.)

Mondrian once said that if art were to approach the level of the spiritual, it must take as little as possible from the everyday world of human beings. You can’t help but see that idea in the facades of the Fleming Building. From the outside, you’d never know there were six floors inside where lots of people work every day. As the Ann Arbor realtor Ed Surovell once remarked, it looks like “a cube in space.” 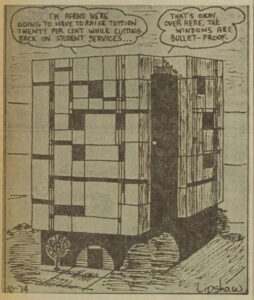 “I may have contributed to the urban legend,” says Boston-based law professor Jeffrey Lipshaw, who had a short-lived career as a ‘Daily’ cartoonist when this piece ran Oct. 30, 1974. (Click the image to enlarge. Image is courtesy of the Michigan Daily archive at U-M’s Bentley Historical Library.)

The interior was not much more inviting, especially as more and more cubicles jockeyed for space to accommodate a growing staff. The vaulted first-floor room designed for regents’ meetings reminded more than a few visitors of a well-appointed cave. Upstairs, close quarters and the scarcity of windows induced an occasional wave of claustrophobia.

One of the prime tenants, James J. Duderstadt, president from 1988-96, said the building actually served its mission well for those who worked there. But he conceded that “it really did have a blockhouse character… There was a sense of isolation that you had to break through or you’d get in big trouble… We forced ourselves to leave the building to get out to the campus.”

When Duderstadt oversaw the plans for what would become the Duderstadt Center on North Campus, designed by Albert Kahn Associates, he advocated for multiple entrances and soaring windows — the antithesis of the Fleming Building.

In the 2010s, the exterior masonry started to peel away. There had to be emergency repairs, then annual inspections to ensure safety. Planners concluded the cost of a full-blown fix would be prohibitive, and their eyes turned to the grand old Ruthven Building, designed in 1928 but still sound — and, in the eyes of many, a more appealing home for the administration.

The Fleming Building is scheduled for demolition in 2022.