‘This line of bullets missed me by 15 feet’ 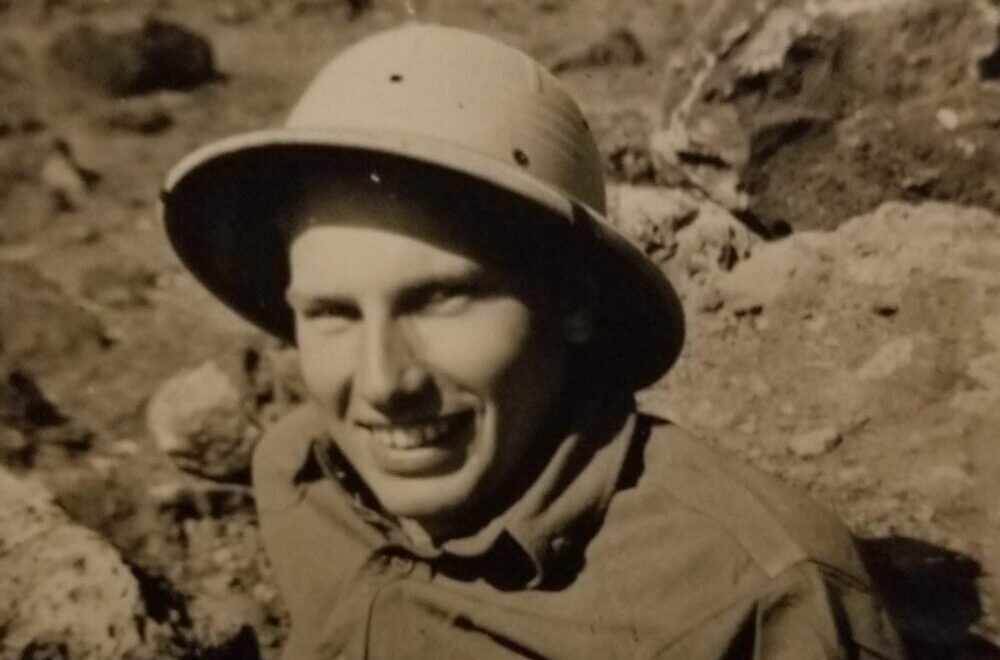 Sunday, Dec. 7, 1941, started quietly for Herbert J. Elfring, BS ’50. The U.S. Army private had just finished breakfast and was scanning the weekly assignments on the bulletin board at Hawaii’s Camp Malakole when he heard bombing coming from the direction of Pearl Harbor. It was approximately 7:55 a.m. 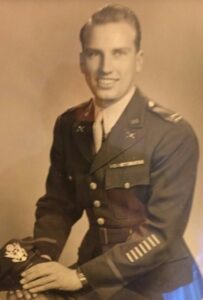 Elfring, pictured here in 1945, achieved the rank of Captain in the U.S. Army before his honorable discharge from the military. (Photo courtesy of Barbara Eaton.)

“I didn’t think too much about it – I thought they were doing maneuvers,” says Elfring. He was stationed on Oahu, some three miles away in the 251st Coast Artillery, an anti-aircraft battalion.

“Then the first Japanese plane strafed our camp,” Elfring says. “This line of bullets only missed me by 15 feet. When I saw this red ball on the airplane, I thought, ‘My God, that’s a Japanese plane!’ Word got out we were under attack and told to take cover.”

Alarms screeching, soldiers rushed to their assigned alert positions. Elfring, whose primary military specialty was radar, joined his squad at the radar station, located on the beach. Radar was still in its infancy.

“At the radar station, we were once again strafed by more Japanese planes,” he says.

“These bullets missed the radar but severed the power source. We could see the enemy plane — just over the mesquite bushes — coming right at us. At the last moment, the track of one Japanese plane shifted ever so slightly, and the line of bullets barely missed me and my crew. To this day, I wonder if the Japanese pilot had a moment of kindness or if the winds had pushed him slightly off course.”

The Japanese attack lasted several hours. All eight U.S. Navy battleships present were damaged, four of which were sunk. Approximately 200 aircraft were destroyed, more than 2,400 Americans were killed, and more than 1,000 were injured.

December 2021 marks the 80th anniversary of the Japanese air attack on Pearl Harbor, “a day that would live in infamy,” as President Franklin D. Roosevelt declared. At 99 years old, Elfring is one of the attack’s few remaining survivors, and this member of the “greatest generation” vividly recalls that day like it was yesterday. It is a pivotal moment in American history that continues to provide endless fodder for storytellers of both fiction and non-fiction. 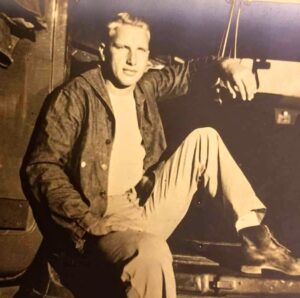 On Nov. 18, 1945, Elfring earned an honorable discharge from the Army. He decided to attend U-M on the G.I. Bill. (Photo courtesy of Barbara Eaton.)

“We were put on war status right away,” he says. “We were prepared for the Japanese to land on the island, but they didn’t; it was strictly an air raid. We continuously manned the radar located on the beach by Barbers Point. This radar was then reassigned to Ka’ena Point, and we stayed operating there until June 1942.”

The 251st was then deployed to the Fiji Islands to search for enemy aircraft and protect the airfields. Elfring was promoted to 2nd lieutenant, becoming the designated radar officer and transportation officer in 1943.

With little activity from the Japanese in Fiji, the 251st moved to Bougainville in the Solomon Islands. They encountered several Japanese planes from Rabaul Island, but it was nothing like Pearl Harbor.

“The planes were likely sent to harass us,” Elfring says. “The Japanese were also set up in Bougainville, but on the opposite end of the island. Army intelligence knew of the Japanese camp location and could track their movements.

“The Japanese were planning a night attack in the spring of 1944. Being the searchlight battery, we were assigned to light up the frontline. We would shine the lights up towards the clouds, and the light would then reflect toward the ground to illuminate the frontline for the 37th Infantry and the American division to completely annihilate the Japanese counter-attack.” 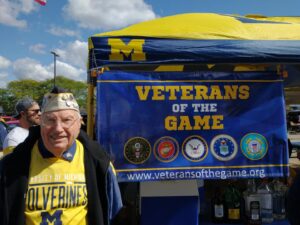 In September 2021, Elfring was named Veteran of the Game as the Wolverines took on Rutgers. He counted 17 of his family members, including all five children, in the stands. His son Richard is a fellow Wolverine. Elfring’s last remaining sibling, Robert, is 90 and lives in Glasgow, MT. (Photo courtesy of Barbara Eaton.)

By 1944, Elfring had graduated from Officers Candidate School and ascended to the rank of captain. His next deployment took him to the Philippines, where he encountered new threats and challenges.

“During the trip, I saw a Japanese kamikaze pilot target the troopship right next to mine,” he says. “The pilot, fortunately, missed his target and exploded into flames and sank into the ocean, causing no damage to the neighboring troopship or ours. My convoy continued onto the Lingayen Gulf.”

When they arrived in the early morning of Jan. 10, 1945, every warship was shelling the shoreline, allowing Elfring’s convoy to land without opposition.

“We had to climb down the side of the ship with rope ladders into [Navy Landing Craft Vehicle Personnel (LCVPs)],” he says. “We then headed to shore. However, the bay had a very prominent sandbar a few hundred feet from shore, which prohibited the LCVPs from making it ashore. We had to disembark from the LCVP and wade to the shore carrying our guns and packs above our heads.

“Some sections of the water reached up to my chin; I don’t know how the short guys made it,” he continues. “Once the entire regiment had made it to shore, we reassembled and trekked to Clark Field, where we set up to protect the airfield.”

In June 1945, Elfring returned to the U.S. for reassignment. It took a month to sail from Manila to San Francisco, where he reentered the U.S. under the Golden Gate Bridge. That was an “unforgettable” moment, he says, choking up.

“When we entered American waters, I was on the front end of the ship. Looking up and seeing the Golden Gate Bridge was the most touching moment of my life. You realize you’re just getting back home after all that time. I left home in 1939. It had been six years since I’d seen my parents.”

On Nov. 18, 1945, Elfring earned an honorable discharge from the Army. Though he grew up in South Dakota and Montana, he decided to investigate the University of Michigan after hearing a fellow military officer speak fondly of his experiences.

“That’s what I had in mind when I got out of the service, so I just headed for Ann Arbor,” he says. “On the G.I. Bill, you can go anyplace you wanted; you might as well select the best place, ya know?”

Like most veterans at the time, he entered college at the age of most graduates and didn’t immerse himself in the traditional student experience.

“I looked at being at U-M as a job and couldn’t wait to do something with my degree,” he says.

From 1950-85, Elfring worked for what is now CMS Energy in Jackson, Mich. He spent his entire career at the utility company and was senior engineering supervisor when he retired. 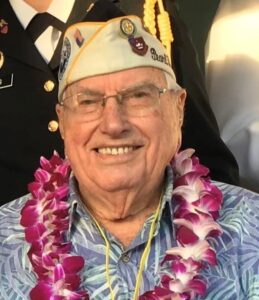 Efring has visited Pearl Harbor more than 10 times. He says his family’s emotional support allows him to return as often as possibe to honor his comrades. (Photo courtesy of Barbara Eaton.)

Elfring has traveled to Egypt, England, Scotland, New Zealand, Australia, and all over the U.S. and Europe since retiring. In 1978, he returned to Pearl Harbor for the first time since 1942. He has visited more than 10 times since.

“A few years ago, there were eight survivors from the USS Arizona [one of the battleships lost] who were able to come, but now there’s only two,” he says.

And though Camp Malakole no longer exists, Elfring can see it in his mind’s eye, even after eight decades. He continues to visit Pearl Harbor for commemorative events and says he feels “mighty blessed, mighty blessed” to have survived the attack.

“Things can be so quiet and – all of the sudden – it’s an attack. It was something you weren’t prepared to experience,” he says. “I’ve become more and more appreciative of being one of the remaining survivors. I guess you didn’t have much time to stop and think about how you feel. I just did what my superiors ordered me to do like a good soldier. You do what you have to do.”

These days, Elfring stays active by square-dancing three times a week. He will turn 100 in March and is one of the oldest and fittest residents at the retirement home where he lives. When asked how he’d like to be remembered, he replies:

“As a fella who always tried to get along with people as best he could and do the best he could,” he says, adding, “and being a successful parent raising five kids.”