Maize, blue, and a destiny for two 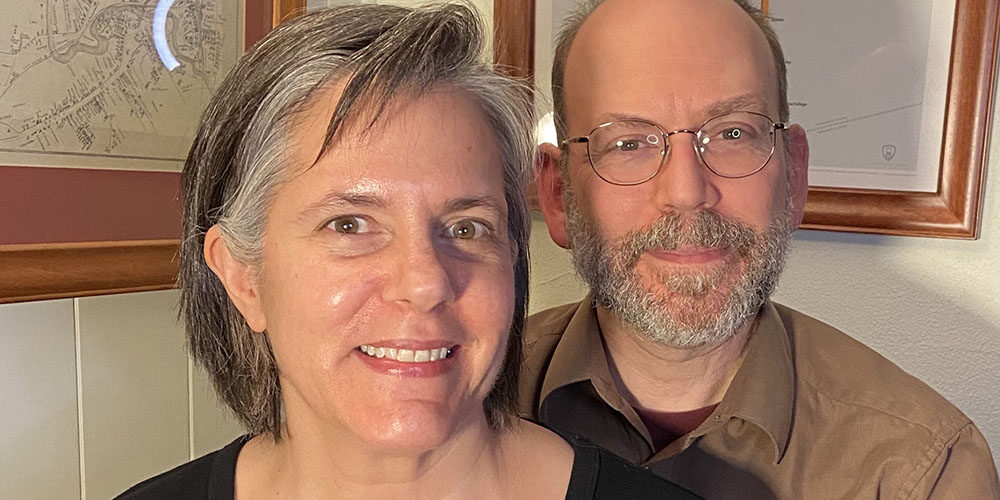 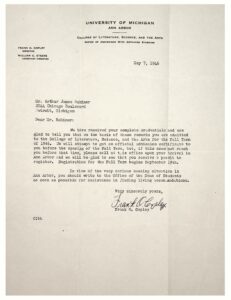 The author was stunned to discover her husband’s maternal grandfather had signed her father’s acceptance letter to U-M. (Image courtesy of Megan Rubiner Zinn. Click on the letter to enlarge.)

We found my father’s University of Michigan acceptance letter in a box of mementos. It was creased and soft, as if it had been read and refolded many times. My father took it from me reverently. “I remember getting this when I was still in the Navy in Oklahoma,” he said. “I must have reread it dozens of times. I was so glad I got in.”

This was shortly after I had met my future husband, Fred. We had stopped by my parents’ house while my mother was going through the box. I had never seen the letter, and when I looked at the bottom, I gasped.

“Look at the signature,” I said, handing it to Fred.

The letter, dated May 7, 1946, was written by Frank O. Copley, a classics professor who had served as the director of LSA’s Office of Admission with Advanced Standing, overseeing the admission of returning GIs. He also was Fred’s maternal grandfather. Fred recognized the typewriter, the same one Frank Copley used when he wrote letters to his grandkids decades later. The machine made the letter e look like an o.

There is a Yiddish word, beshert, which means “inevitable,” “preordained,” or “destined.” It’s often used to describe soulmates. If Fred and I are beshert, it is a very specific kind of blue beshert, (blueshert, if you will) because the University of Michigan has played a role in every part of our relationship — a virtual matchmaker, that began its work 20 years before we were born.

Make me a match 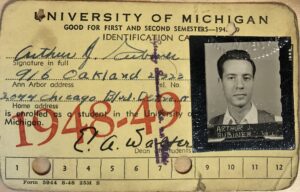 The author’s father as a U-M student. He was admitted to the University by her husband’s maternal grandfather. (Image upplied by Megan Rubiner Zinn.)

After my father got that acceptance letter, our families’ relationships with Michigan continued on separate paths. Dad enrolled and stayed to graduate from LSA and the Law School. My three siblings and I went to Michigan as well. My older sister, Julia, discovered the Residential College her sophomore year, and we followed her one after the other, with the rest of us living in East Quad. As an RF (resident fellow, the RC’s version of a resident advisor), I lived in East Quad the longest, on and off for five years.

Fred’s mother, Ann Copley Zinn, daughter of Frank Copley, grew up in Ann Arbor. Although she didn’t go to Michigan (attending her father’s alma mater of Stanford instead), she worked for many years as the administrator of the LSA side of the Medical School’s Inteflex program. Fred’s father, Karl Zinn, earned his master’s and doctorate from Michigan’s joint program in education and psychology. He then spent his entire career as a faculty member with the University’s Center for Research on Learning and Teaching (CRLT). Fred’s brother David, also in the RC, lived in East Quad with my younger sister Joanna and me and was a bit of a dorm-wide celebrity for his illustration. (He is now a bit of an international celebrity for his brilliant chalk art.) 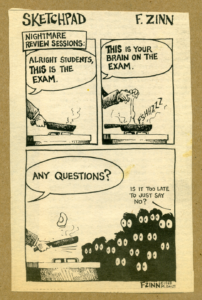 My first awareness of Fred was in print. In 1987, he was a regular cartoonist and illustrator for the Michigan Daily. He wasn’t really a student (shhh, don’t tell) — he had graduated from Kenyon College in Ohio and was taking a class at the University. His cartoon in Weekend Magazine was called “Sketchpad” and featured a slightly bent view of life at U-M. Clippings of “Sketchpad” were regularly taped to dorm room doors, along with clips of “Calvin & Hobbes,” “The Far Side,” and “Bloom County.”

Thanks to Michigan’s CONFER system, Fred and I met, at least electronically. Developed at Michigan in the 1970s, CONFER was one of the first computer conferencing systems and it influenced the development of many others. It functioned like most bulletin boards in the pre-Web era. There were subgroups, and subtopics, and extensive discussions among members. One of the key figures in its creation was Fred’s father. In fact, Karl Zinn also played a role in establishing the Internet in Michigan. While Fred was being born, Karl sat in the waiting room, writing a proposal to the National Science Foundation that led to a statewide educational computing network. One could say Karl was the ultimate matchmaker, developing a technological platform where his son would meet his future wife.

All of the RFs in East Quad received Mac SEs and modems on loan beginning in 1987 to improve staff communication, so we were online earlier than most people. The Residential College had its own CONFER subgroup, RC Community, which Karl had set up while teaching a course in the college. In the fall of 1988, I was an active participant, as were Joanna, David, and Fred (who had volunteered to help his father with the course and the online group). 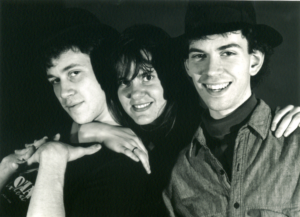 In 1989, the author is flanked by brothers David Zinn (left) and Fred Zinn.

I quickly began paying attention to Fred. His comments were funny and odd, matching the sense of humor I had seen in his cartoons. I wanted to get to know him better, but I was way too shy to do much about it. The best strategy seemed to be to try to engage with him on CONFER.

It worked. In late September, someone had started a thread with the question, “What is your greatest fear?” I responded that Joanna’s greatest fear was that she’d have to build a cathedral one day. The commenters in the thread didn’t get it. Why would she have such an unrealistic fear? Fred got it, though. “Taken literally, that does sound pretty scary (them things are huge!),” he wrote.

I responded: “How come only Fred seems to understand this,” and at that moment, our eyes met across the crowded virtual room.

Note: I can quote this exchange verbatim because Karl had printed years of CONFER discussions (now part of his papers in the Bentley Historical Library). How many people have a record of the moment they met their soulmate?

Fred and I were soon communicating via CONFER’s DM function or “chat,” as it was called. It was perfect for two ridiculously shy people because we could flirt and take risks in a way we probably wouldn’t have been able to do on the phone or in person.

Meanwhile, in our efforts to get to know Fred, Joanna and I connected with David, and he and Joanna started a flirtation of their own. They became a couple too, and although they broke up after three years, they remain close friends. 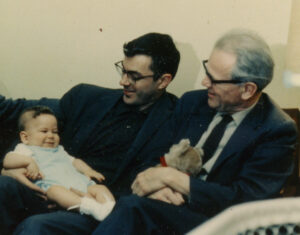 Fred and I didn’t meet in person until a month later. The joke in the RC Community conversations was that Fred didn’t even exist; he was just his father’s AI experiment. But then, Fred came by East Quad with David to help with decoration prep for the legendary “EQ Halloween Thing,” the best Halloween party on campus. Joanna met them first, as she happened to be downstairs. She frog-marched them upstairs to meet me.

At the time, Fred and David both wore distinctive outerwear. David’s was a long grey wool coat and a bowler hat. Fred wore a long, black British Civil Defense coat and a fedora. They thought it would be amusing if they changed outwear for our meeting and if David wore Fred’s glasses, so when I first saw Fred, I had the cognitive dissonance of not quite knowing if it was him. He had the cognitive dissonance of seeing only a fuzzy purple blob (he can’t see without his glasses).

Our courtship had all the hallmarks of a romance in Ann Arbor. First kisses by East Quad’s front door, movies at the MLB, walks in the graveyard and the Arb, MUSKET’s performance of “Jesus Christ Superstar” at the Power Center, concerts at the Ark, hanging out in the Burns Park playground. Fred even tried to propose marriage by the bell tower at midnight a few years later, but just as he was about to begin, some other couple got there first, stealing the limelight.

And the beat goes on 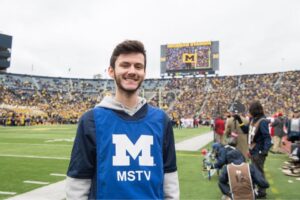 After graduating at the end of that year, I stayed in Ann Arbor, working at Borders. Then, in 1990, I moved to Minnesota for graduate school, dragging Fred with me. Fortunately, because our families are still in the area, we visit Ann Arbor often.

Despite the years away, Ann Arbor and U-M continue to shape our lives and our relationship. When most of his high school classmates in Northampton, Mass., opted for colleges in the Northeast, our older son, Charlie, felt the pull of fate. He enrolled at Michigan, attending the Residential College and living in East Quad, before graduating in 2020. And because the story couldn’t end any other way, he also met someone on campus and fell in love.


(Top image of the blueshert couple is courtesy of Megan Rubiner Zinn.)

About the Author
MEGAN RUBINER ZINN is freelance writer based in Northampton, Mass. Her work has appeared in LSA Magazine, alumni publications of Smith College School for Social Work and UMass Amherst, the New York Times Motherlode blog, Dame, Salon, Jezebel, Grown & Flown. Her book Our Precious Pooper was published by Knock Knock in 2016.
Social
Share on: Share on Twitter Share on Facebook