The power of the pin 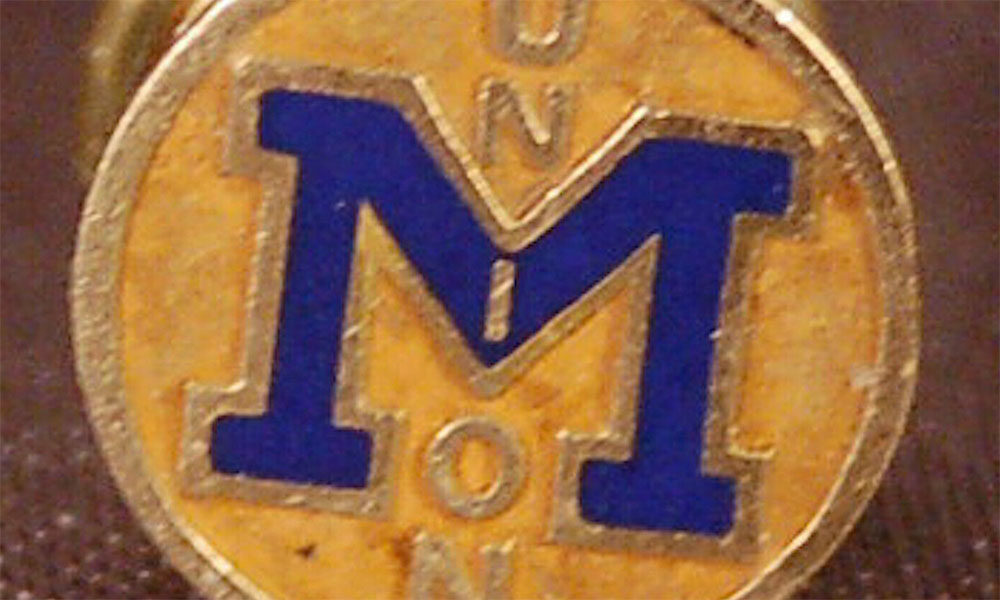 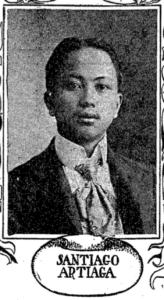 In December 1941, when the Japanese army began its swift conquest of the Philippines, Santiago Artiaga, then 63 years old, was one of his nation’s leading civil engineers and public servants. He had been Manila’s city engineer. He designed the city’s pure-water system. He wrote codes for safe buildings. As a professor at the University of Santo Tomas, he trained many of the Philippines’ civil engineers. He also was mayor of two major cities and governor of a province.

By the time the Japanese were gone in 1945, Artiaga had lost his home, his health, and all the personal papers he had accumulated since his graduation from the University of Michigan in 1904.

In 1947, he wrote to tell an American friend he would make the 4,000-mile trip to Ann Arbor for Homecoming. “I emerged from the war depressed, a fire victim, broken in health, exaggeratedly aged because of near starvation, and losing the bulk of [my] earthly belongings, the result of my life work,” he wrote. “But loyalty and love for the Alma Mater seem to admit of no alibi … I must visit Michigan for spiritual reinvigoration.”

He told friends he was heartbroken over the loss of his Michigan diploma and especially of a bit of sculpted enamel he had treasured for 40 years — his Michigan Union button.

Evolution of a tradition 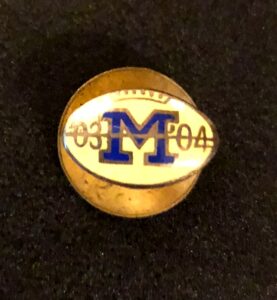 Historian Greg Dooley believes this may be the pin Artiaga sought to replace. (Image courtesy of Greg Dooley.)

Over many years, thousands of Michigan alumni kept these baubles in dresser drawers and affixed them to their lapels. The button first appeared in the 1890s when U-M’s Athletic Association, forerunner of the Athletic Department, asked a jeweler to create a batch of them.

The association began to sell the buttons to raise money. Athletes often received them for free. The design evolved year by year. The earliest examples collected by Greg Dooley of MVictors.com, a leading chronicler of U-M athletic history, carry the initials “U of M” or “U M” or just “M” against a field of sky-blue and light yellow. Soon the shapes began to vary — a football in 1898-99; a tennis ball in 1899; a baseball mitt in 1907-08; the cleated shoe of a sprinter in 1910-11.

Santiago Artiaga’s button was probably in the football shape chosen for graduates of 1904.

That was the year the Michigan Union was founded as a unifying social club for all Michigan men — students, faculty, and alumni alike — amid tensions between undergraduate fraternity members and “independents.” To counter those tensions, the Union’s leaders and many others of the day boosted the idea of “school spirit” — an allegiance to one’s university as a vessel of high ideals. The little maize-and-blue button became a symbol of that devotion.

The Union takes over

Well aware of the popularity of the Athletic Association’s buttons, leaders of the Union in 1912 negotiated to take over the button operation. To enhance recruitment, the Union would give new members one button to wear as students. Then another would be awarded to four-year members upon their graduation — or sold to slackers who had signed up late. A version in gold was provided to those who paid to be “life members” of the Union.

“The Union button will be a great aid to us in enlarging our membership among the students,” Homer Heath, manager of the Union, told the Michigan Daily. “It adds another tangible asset that we can offer for membership.”

Now the athletic symbols were replaced by a simple block M plus the digits of a student’s year of graduation, though the shape of the button morphed over time — circles, squares, rectangles, shields, diamonds, octagons. According to 1993 LSA grad Dooley, they were made by a succession of jewelers — Wright Kay & Co. of Detroit; William Arnold of Ann Arbor; Bastion Brothers of Rochester, NY; Whitehead and Hoag of Newark, NJ; and Burr, Patterson & Auld of Detroit.

In 1933, the design was standardized to a blue block M with the letters “U-N-I-O-N” in a vertical stack down the center against a maize circle. In 1943, the annual digits were left off. The tradition continued for 10 more years, then was dropped.

But that did not deter Santiago Artiaga.

Born in 1878, Artiaga had come to Michigan among a cadre of students called the Pensionados.

The U.S. had won its war with Spain in 1898 and taken over Spain’s colonies, including the Philippines, then quashed Filipino revolutionaries in a brutal struggle. Now Americans sought to recruit and train young Filipinos from elite families to become the Americanized leaders of the Philippines under U.S. colonial rule. These were the Pensionados, some 500 in all, who earned degrees at Michigan, Harvard, Princeton, Indiana, and a score of other U.S. universities.

Some historians now see the Pensionados only as pawns of the American colonial project. However that may be, Artiaga declared his American education to have been the foundation of his service to his country. His devotion to Michigan was not “rah-rah” nostalgia for lost youth. It was intertwined with a life of far-reaching achievements. 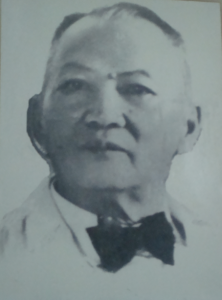 “In humble and in top positions as well,” he wrote, “Michigan was ever-present in my mind. I always set whatever honor or apparent success I attained to the credit of my Michigan education. I survived the war because of the traditional Michigan spirit … never to give up.”

When he arrived in Ann Arbor for the 1947 reunion, Artiaga’s friends told him they had arranged a special ceremony. He would receive a duplicate of his 1904 diploma. And he would receive a Michigan Union button to replace the one lost to fire during the war.

In the 1950s, an outstanding collection of Michigan buttons could be seen at O’Grady’s Barber Shop, 1110 S. University (“five chairs – no waiting”). Where those pins are now, no one is sure. The Union has a collection, as does the Bentley Historical Library. MVictors.com’s Dooley believes he owns the largest private collection. He invites anyone who owns a Union button to write him at mail@mvictors.com.