Invitation to a Nazi 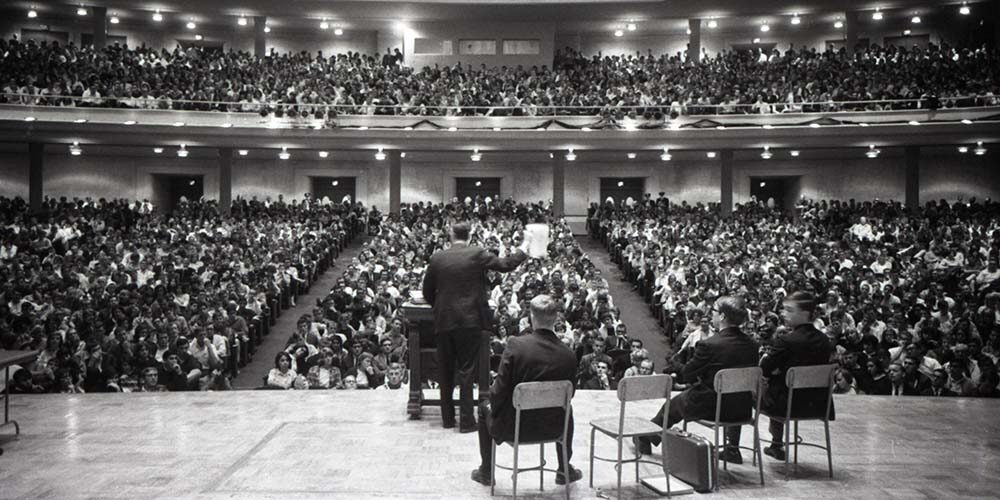 The fall semester of 1964 had barely begun when a small advertisement appeared on a page inside the Michigan Daily. It said:

“U. of M. Union wishes to announce the appearance of Cmdr. George Lincoln Rockwell on Campus in October.”

The Union, not to be confused with the building of the same name, was the student organization that sponsored many of the school year’s major public events. Its operations were largely independent of the administration and the faculty. Its student officers chose the speakers, organized the concerts, booked the venues, and sold the tickets. 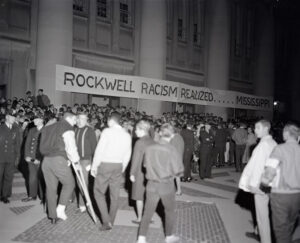 Many readers of the Daily may not have recognized this guest’s name. But Lloyd Graff did. He was a student who occasionally wrote for the Daily. In a brief editorial, Graff said he had experienced the announcement as “a piece of shrapnel boring into my spine.”

“How can a student organization dignify Rockwell, an avowed Nazi, with an invitation to appear on campus? This is a man whose symbol is the twisted cross of Hitler. He shouts his adherence to the hideous Nazi creed.”

Graff had it right. Before the term “neo-Nazi” became familiar, George Lincoln Rockwell was the prototype. Tall and handsome, a glib and effective speaker, Rockwell had been inciting attention as the self-declared leader of the “American Nazi Party” since the late 1950s.

Graff conceded that the First Amendment protected Rockwell’s right to speak — somewhere. But on the stage of Hill Auditorium? “Should he be allowed to use a University facility to shout his diatribe?”

His question set off a debate that lasted several weeks. In a time before the internet and social media, the discussion played out largely on the editorial page of the Daily, and in language far more civil than is customary in today’s public controversies.

Long before free-speech debates consumed campuses in the 21st century, the contest over George Lincoln Rockwell’s appearance at Michigan became a classic battle in microcosm over the proper role of the First Amendment on a college campus, even about the mission and purpose of a university.

A monster up close

Rockwell used his speech mostly to attack students’ faith in the media: “The reason that you are not able to find out what’s going on in this country…is that the Jewish people have…been able to win control of your media of information and entertainment.”
On the day of Graff’s protest, the Daily’s pages carried the customary news and notices of a pleasant fall. The Wolverines were preparing for their home opener against Air Force. Cinema Guild was urging students to attend Thursday and Sunday movie nights because Friday and Saturday crowds always overflowed. The Beatles’ A Hard Day’s Night was playing a long run at the State Theatre.

But it was also a time of jitters and fear. It was not yet a year since the assassination of John F. Kennedy. A coup d’état had just unseated the government of South Vietnam. Students at the University of California, Berkeley, protesting a university ban on all political activities on campus — even invitations to outside speakers — had battled with police. 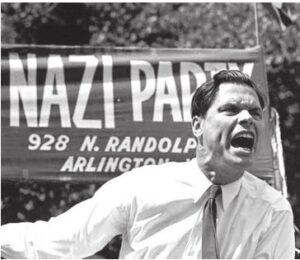 Long before free-speech debates consumed campuses in the 21st century, the contest over George Lincoln Rockwell’s appearance at Michigan became a classic battle in microcosm over the proper role of the First Amendment on a college campus, even about the mission and purpose of a university. This is Rockwell in full-outrage mode. (Image: Lansing City Pulse.)

Race and racism dominated the headlines. Southern whites appalled by the passage of the federal Civil Rights Act, which had been strongly supported by President Lyndon Johnson, were backing the presidential candidacy of Gov. George Wallace of Alabama, an avowed segregationist. The nonviolent strategy of the Rev. Martin Luther King Jr. had paid dividends, but younger Black leaders were calling for more confrontational tactics in the struggle for equality.

Sen. Joseph McCarthy was dead, but the fear of Communism persisted, fueling the rise of Republican Sen. Barry Goldwater of Arizona, the most conservative presidential nominee in memory, whose campaign was entangled with the far-right John Birch Society.

In short, the country was in a state of unrest that demagogues like George Lincoln Rockwell dream of.

World War II was not even 20 years gone. It lay square in the middle of living memory for most faculty and staff. Undergraduates of 1964 were too young to remember it, but they had grown up in the war’s shadow. In the wake of Israel’s 1961 trial of Adolf Eichmann, a key organizer in Adolf Hitler’s effort to exterminate European Jewry, Americans were coming to a deeper understanding of the Holocaust.

So for many students, the Union’s invitation to an American who called himself a Nazi offered a chance to observe a monster in the flesh. The organizers would have no trouble filling Hill Auditorium.

… Continue reading at the University of Michigan Heritage Project. The story picks up at Chapter 3, “The American Nazi.” Feel free to return here when you are finished reading to comment below.

In the lead image from U-M’s Bentley Historical Library, Rockwell speaks from the podium in Hill Auditorium.