Talent to spare, even in a writing class with Arthur Miller 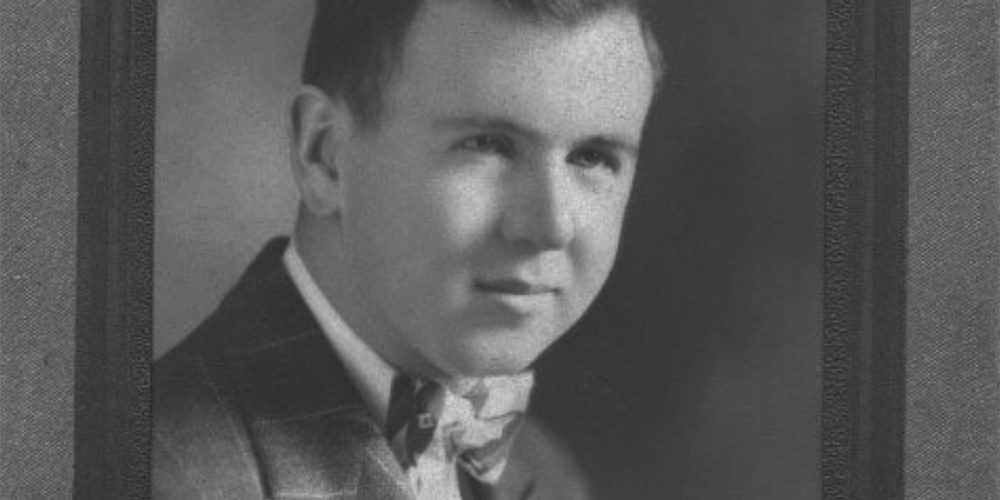 Sometimes one teacher makes all the difference. That’s how it was for Edmund G. Love, BA ’36, a classic product of the Great Depression.

Love was the oldest of three sons of a businessman who built up a lumber and coal operation in Flint, Mich. In the 1920s, there wasn’t a better city in America to do business, thanks to General Motors and the great auto boom, and the family’s fortunes soared.

“You are going to be a writer, my friend. No matter what black moments the future brings, don’t you ever forget it, and don’t ever give up.” — Erich Walter, assistant professor of English and assistant dean of the College of Literature, Science, & Arts
Love’s mother had died when Ed was a boy. Just before her death, she made her husband promise that at least one of their boys would attend college. So as he moved through high school, the family came to expect the eldest would be bound for Ann Arbor. And when Love graduated from Flint Northern High in 1929, his gift was a new car.

But Love’s father remarried early in 1929, and Ed’s stepmother thought he needed seasoning by way of military school. So at 17, he spent a miserable year there, oblivious to the stock market crash and the family’s financial implosion. He came home in the spring of 1930 to find his car sold and his family deep in gloom. His stepmother told him he could forget his college dreams.

Even so, Love’s father stayed true to the promise he made to Ed’s mother. He handed his son a hundred dollars and said: “If you’re going to school, you’ll need some new clothes.” 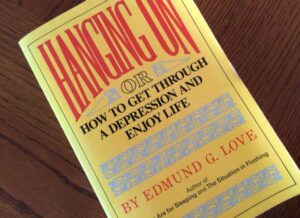 Love would go on to publish 20 books in his career. (Image: MLive.)

Love had hazy notions of becoming a writer someday; otherwise, he gave no particular thought to his future. It was enough to be enrolled at Michigan. The problem was how to stay there.

“There wasn’t a day in that whole school year when I wasn’t financially strapped,” he would write.

So it went. One semester Love would have enough cash for school. The next he wouldn’t. He would stay home for a term — or a year — and deliver coal for his dad or work on the line for Buick, saving every extra dime. The Loves’ coal yard stayed open throughout the Depression. But Ed watched his father’s pride wither.

“We were living in a world where all the people were broke, where everyone was struggling for survival, where forces beyond our understanding and remedy were operating on us,” Love would write much later, “and still we were embarrassed to death at our predicament.” 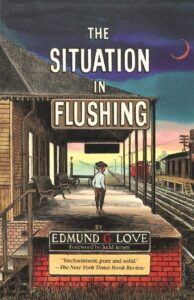 Love had always considered himself lucky. Once he was the sole witness at a train crash, and he was paid $360 for his testimony in the subsequent civil trial. The only time he ever bet on a horse, he came home with $97. He scored a minor fortune of $586 in a chain-letter scam.

But in the fall of 1934, five years after he took his first college course, luck was in short supply. Funds were nonexistent. He asked his advisor about scholarships, loans, competitions, and prizes. That’s when Love learned about the Hopwood Awards. Funded by the legacy of the gifted yet tortured playwright Avery Hopwood, the creative writing awards promised a $1,500 prize.

Hopwood, a U-M graduate of 1905, had died in 1928 after writing a string of fabulously profitable comedies and bedroom farces for Broadway. Despite his commercial success, Hopwood longed to be a respected novelist. His life spiraled downward into alcoholism and depression as the goal eluded him. Ultimately, he abandoned the dream and endowed the awards program to encourage U-M students to pursue the kind of serious writing career he’d planned for himself. Prizes would recognize the best piece of fiction, poetry, drama, and exposition written by a student. Distinguished writers would judge each year’s entrants.

Love had been toying with the idea of writing a historical novel about the Odawa leader Pontiac’s war against the British in the 1760s. Perfect, he thought: He would write it up, win his $1,500 Hopwood Award, and sail home to graduation.

An opponent of “bigness” 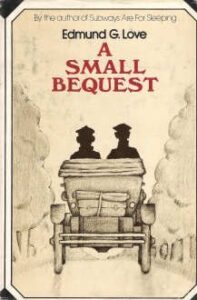 As for this book, which takes place in the UP, one amazon.com reviewer wrote: “I’m surprised Jeff Daniels hasn’t made it into a movie yet.” (Image: amazon.com.)

To qualify for the award, Love had to enroll in an English or journalism course in the year of his contest entry. So he searched the catalog and found one that sounded right — English 153: Creative Writing. He talked the instructor into letting him in.

That was Erich Walter, assistant professor of English and assistant dean of the College of Literature, Science, & Arts. Walter was the sort of figure overlooked by those who assess the prestige of great universities. He was not much for research. Instead, he made his name in the classroom.

A graduate of Ann Arbor High in 1915 and U-M in 1919, Walter never earned more than a master’s degree. But he rose to positions of ever greater responsibility, both on and off the campus, for his clear thinking and easy way with people. He was calm and funny. A tad rotund, he would ease back in his chair and just listen, nursing a carefully chosen cigar.

Many years later, the budding radical leader Tom Hayden, ’61, then a senior at U-M, had a long talk with Walter for a profile in the Michigan Daily. Walter remembered his days as an undergraduate when students spent many a Sunday afternoon chatting in professors’ living rooms. But now, in 1960, the University had quadrupled in size. There were fewer opportunities for a professor to impact a student personally.

“If I have had any central purpose here,” Walter told Hayden, “it’s been trying to break down the aspects of bigness and trying to adjust the student to the University complex and make him feel attached to this place, in the way students are attached to smaller schools. It hasn’t been wholly a losing battle, but it’s been difficult.”

An A for effort 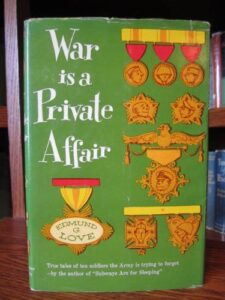 By night, Love toiled on his Pontiac novel. By day, he eyed his classmates in English 153, an arty crew who discussed James Joyce and Henrik Ibsen. One of them was named Arthur Miller, who would become the preeminent American dramatist of his generation. Some of the others looked pretty impressive, too.

Professor Walter read the drafts of Love’s novel, offered advice, and dropped hints that the work was less than publishable. Love powered through. He finished the book by Christmas and got an A in the course. Then he told Walter he meant to enter his manuscript in the Hopwood competition that spring.

Walter suggested he hold off.

“But you gave me an A,” Love protested.

“That A was for effort,” Walter replied. “You improved. I’ve never had a student who learned to write as fast as you have. But you had a long way to go when you started out, and in spite of your improvement, you have a long way to go yet.”

Love wasted no time feeling sorry for himself. He spent his spring vacation writing a second draft. On May 1, he delivered the manuscript for Hopwood consideration. He heard one of the judges would be no less than Sinclair Lewis, author of Babbitt and Main Street, winner of the Nobel Prize in literature. 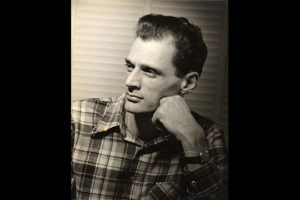 A month later, Love climbed the stairs to the Michigan Union ballroom to hear the Hopwoods announced. He heard one name after another, including “Arthur Miller.” But there was no “Edmund Love.”

The devastated writer felt someone touch his elbow as he turned to go. It was Professor Walter, who asked him to come to his office in Angell Hall. He wanted to tell Love a couple of things.

The first thing was terrible. Sinclair Lewis, he told Love, had pronounced his novel one of the worst he’d ever read.

Maybe it was cruel to be so blunt, Walter admitted. But he had a reason for being so harsh.

“You’re going to have to learn to shrug off adverse criticism,” he said. “I had more than 50 students in my classes this year. Some of them got prizes, but I doubt that any of them will be writers — except for Arthur Miller.

“I could have brought Arthur back here, but he doesn’t need encouragement,” Walter continued. “You do, because you are going to be a writer, my friend. No matter what black moments the future brings, don’t you ever forget it, and don’t ever give up.”

Edmund G. Love graduated from Michigan in 1936, seven years after he started. For four years, he taught in the Flint public schools. He spent World War II in the army.

Then, he finally launched the writing career his mentor Walter envisioned. Love would publish 20 books in all, most of them autobiographical. His best-known titles include Subways Are For Sleeping (1957), an unlikely hit about Love’s perilous bout with poverty as a homeless writer in New York; War Is a Private Affair (1959); The Situation in Flushing (1965), an account of Love’s small-town boyhood; and Hanging On, a memoir of his years at Michigan. He died in 1990 at the age of 78.


This article is adapted from the writer’s “Depression Generation,” a story published by the University of Michigan Heritage Project. The sources were Edmund G. Love, Hanging On, or How to Get Through a Depression and Enjoy Life (1972); and Thomas Hayden, “Profile: Erich Walter,” Michigan Daily, 1/14/1960. The lead image is courtesy of U-M’s Bentley Historical Library.