The star who skipped every class 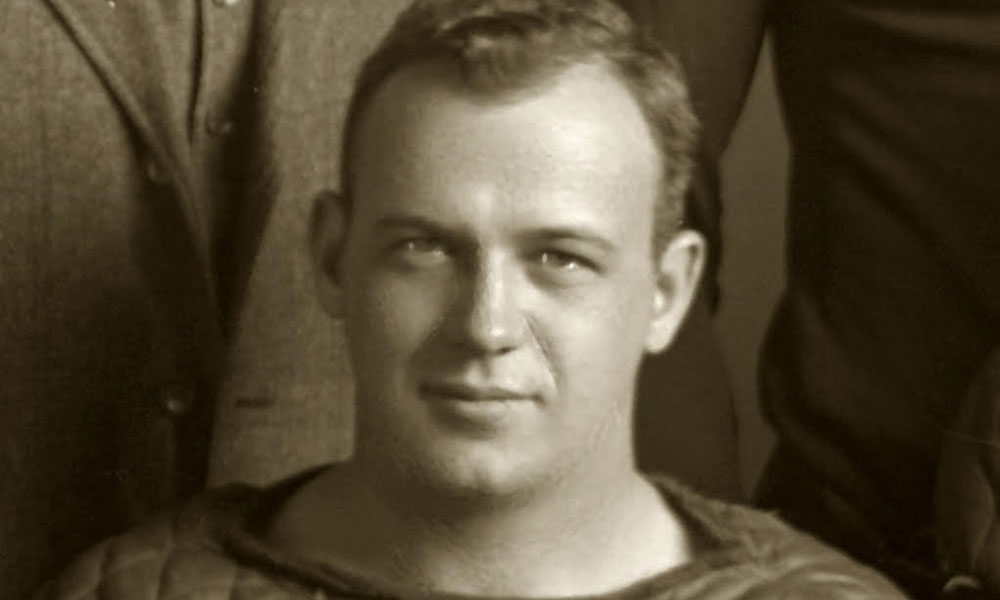 It was the week after New Year’s, 1910, and James Joy Miller, newly elected captain of Michigan’s varsity football team, was missing.

Students were returning to campus to start winter term. “Joy,” the Wolverines’ star right end and quarterback, supposedly was en route to Ann Arbor from his hometown of Detroit, according to his father, James G. Miller.

But no one in town had seen him. Not his teammates. Not his friends. And not the faculty of the Department of Engineering, who wanted to know why none of them had encountered Miller in class during the whole fall semester, though he’d been a star presence at Ferry Field for most of the football season.

The athlete had been part of a quick rebuilding effort on the part of Coach Fielding H. Yost. At try-outs the previous summer, the Chicago Daily Tribune reported, “few of the candidates knew football thoroughly, and only three or four were familiar with Yost’s methods.”

But the coach “worked untiringly with the men and gradually developed them to the point where they now are entitled to be ranked with the famous Michigan teams of 1901 to 1905” — whose cumulative record had been 55 wins, one loss, and one tie. 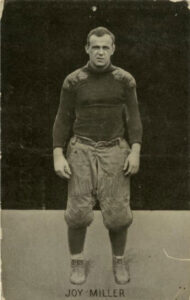 Joy Miller’s role as a Wolverine before 1909 had been spotty. A three-sport star at Detroit Central High School, he first played in three games for U-M in 1907. For reasons that aren’t clear, he was not on the roster at all in 1908.

The athlete was back at practice at the start of the 1909 season, but an injury laid him low for the first two games. Then he joined the squad — after signing a standard letter attesting that he was a full-time student — and filled the starting slot at right end.

Michigan squeaked out their first two wins (against Case and Marquette) by margins of one and three points, respectively. Then, with Miller on the field, they smashed Ohio State (33-6) and Syracuse (44-0).

Next came a heartbreak loss (15-6) to Notre Dame. (Covering that game for the Detroit Free Press, sportswriter E.A. Batchelor referred to the Notre Dame starters as a pack of “Fighting Irishmen,” thus coining one of football’s most famous team names.)

The Wolverines beat Penn on the road. Then, with their final game against Minnesota looming, a problem arose.

Quarterback Billy Wasmund was in his fourth year of play. That didn’t violate any rule at Michigan; the team didn’t belong to a conference at the time. But it would violate the Western Conference rule against a fourth year, and Minnesota belonged to that conference. So Wasmund was declared ineligible.

For quarterback, Yost selected his right end — Joy Miller, who proceeded to marshal the team to a 15-6 victory at Minneapolis. (Thus Michigan for the first time reclaimed the not-yet-famous Little Brown Jug.)

Coach Yost with the Michigan Wolverines — “the Yostmen” — in 1905. (Image courtesy of U-M’s Bentley Historical Library.)

Yost promptly declared that Michigan’s victory over Minnesota entitled the Wolverines to the informal title of “Champions of the West.” Yes, Notre Dame had beaten the Wolverines. But Yost claimed — though it was vehemently denied in South Bend — “there are men on the Notre Dame team that have played years beyond the recognized limit in the West, and that bars them.”

Did Yost know he was throwing stones in a glass house?

Days later, after the final team photo was snapped at Rentschler’s Studio, the varsity elected Joy Miller as their next captain by a narrow majority over the first-team All-American Albert Benbrook, left guard.

Then, in early December, somebody in the dean’s office was doing a standard check of student records and noticed there was no registration card for James Joy Miller, the athlete’s formal name. Professor Mortimer Cooley, dean of engineering, summoned Miller to a meeting, but he didn’t show. Professors said he had been absent all fall.

A letter went to Miller demanding an explanation. He wrote back to say he had shifted his major from engineering to forestry. But a further check showed Miller had paid no tuition for courses of any kind — though he claimed to have enrolled late in the fall, paid his $45 in fees, and attended a few classes.

“Sick about the business” 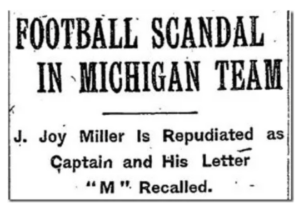 The athlete’s letter M was recalled and he was expelled from the student body.

The embarrassing news spread through the faculty and administration, then broke into public view.

On December 23, Professor George W. Patterson, chair of the Board in Control of Athletics, sent letters of apology to all the schools Miller had played against, expressing “sincere regret for this unfortunate error.”

Then he told the press: “The whole university is sick about the business. The board, in an effort to find some extenuating circumstance or elicit some explanation from Mr. Miller, has kept the matter quiet until today.” But with no further explanation from Miller, the faculty moved toward expulsion.

Again they summoned the athlete to a meeting. Again he did not appear, and no one knew where he was. The New York Times reported that Miller’s father said “criticism and football injuries had possibly unsettled the young man’s mind temporarily.”

The student council launched its own inquiry and called eight witnesses to the meeting room of Michigamua, the senior male honorary society. Miller’s father and Dave Allerdice, the 1909 captain, were on the list. Apparently, the key question was: “Anybody see Joy in a classroom last fall?” Apparently, no one said yes. The council recommended that Miller be expelled from the student body. The engineering faculty agreed, and Miller was gone.

“Wandering in a dazed condition”

Published reports about the athlete’s whereabouts are all but impossible to untangle. Miller’s father told reporters he was investigating a rumor “that a man resembling the football player had been seen wandering about in a dazed condition near Dundee, Mich.” His son also was reported to have been seen in McGregor, Manitoba, then in the Pacific Northwest. The Michigan Daily quoted a long and all but incomprehensible letter written by an unnamed young woman in Detroit who claimed to be Miller’s fiancee, saying Joy had been unfairly tarred from coast to coast.

Finally, more than a year later, Miller’s dad said Joy had sent him a letter from Walla Walla, Wash. He was working on a fruit farm, Mr. Miller said, but the young man had no memory of how he’d gotten there or anything else in his recent past.

In fact, curious reporters learned that Joy had been corresponding with friends back in Detroit. They said his memory seemed fine.

In any case, Miller’s career as a Yostman was over.

This sorry business was unearthed by Greg Dooley of MVictors.com, who teaches a course on the history of college athletics at U-M.

“Yost never gave back his claim to the title of Champions of the West,” Dooley notes, “nor did he return the Little Brown Jug to Minneapolis.”