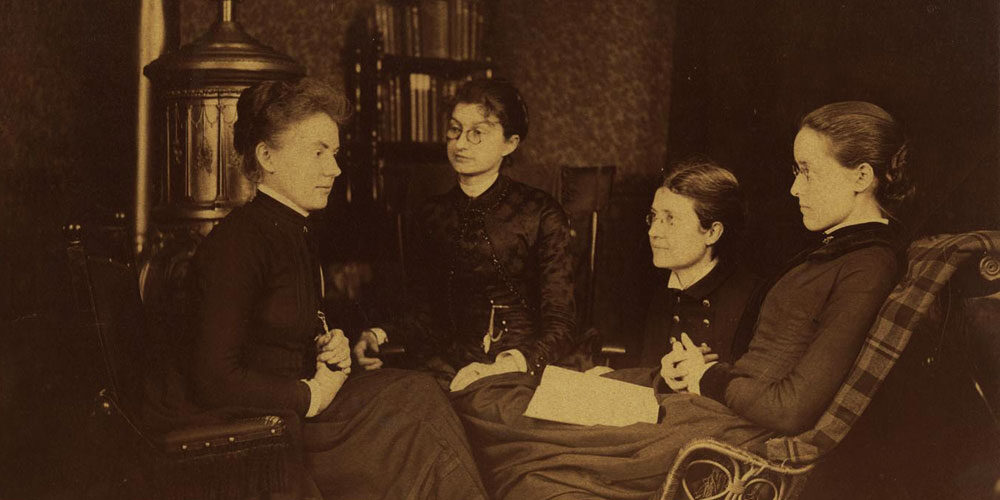 Elizabeth Farrand (1852-1900) grew up in Ann Arbor when the University, according to one chronicler, “was exclusively an intellectual male club of Regents, faculty, and students. No woman’s opinion was asked … no woman was hired to assist or teach in it, and no woman was admitted to the student body.”

Of the women who made up the first class of “co-eds” in 1871, Farrand said, “they were a trusty band of pioneers; the University contained few better students.”
Farrand broke all those norms and made a mark on the University’s history, and not only because she was one of the first two women ever to work there.

“Lizzie” Farrand (above, third from left) was third-generation Ann Arbor. Her grandfather, Bethuel Farrand, migrated from New York when the town was a village of some 25 families. Born in 1852, just after her father’s death, Farrand grew up with her mother and younger sister in a house that took in student boarders to help pay the bills.

She graduated from Ann Arbor High School probably in 1870 or 1871. That was just when Madelon Stockwell and a small cadre of other young women became the first to break the gender barrier at Michigan.

Did Farrand consider enrolling with them? If she did, she chose not to — yet. Instead, after a brief spell as a teacher, she took a job as a clerk at the University Library, one of two women hired by the University Librarian, Andrew Ten Brook. He paid them each 15 cents an hour. 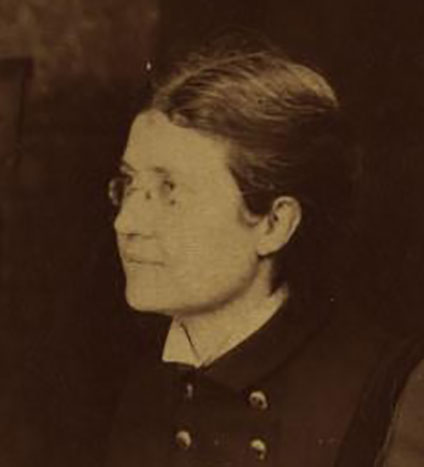 This “experiment was decisive,” Ten Brook reported, “in favor of hiring female assistance for some kinds of labor. There are indeed some services for which they cannot be called upon — for instance, taking down and replacing books belonging upon the higher shelves — yet in industry and fidelity, and in quickness and accuracy of perception and execution, they are quite in advance of the average young men who could be obtained.”

And lucky for Ten Brook, the scarcity of other jobs for women meant Farrand was “ready to do faithful service at a much lower rate of pay” than men would accept. So much for equal pay for equal work in 1870s Ann Arbor.

Farrand joined the library just as the University was emerging as a center of scholarly research, thanks largely to the new president, James Burrill Angell, who waged a constant campaign to raise more money for books. “The library must be the center of the intellectual life of the University,” Angell declared. “It should therefore be cared for with the most scrupulous pains and be nourished with the largest generosity.”

Farrand set about completing and revising the library’s first catalog. (Her female co-worker had stayed on only briefly.) This was a complex and demanding solo task, since Farrand worked without the Dewey Decimal System, which the library didn’t introduce until 1897. Instead, the books had to be arranged by a cumbersome system that placed each in a fixed location. She quickly mastered the work. 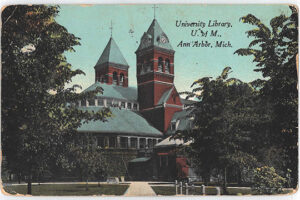 This postcard was addressed to Mrs. Thomas Weir, Harbor Beach, and read: “I got here at last. Charles and Aunt Cassie met me at the station. I came out alone. Made the grade all right – I haven’t had much doing yet. Art.”

Ten Brook had hired her, but Farrand soon realized her boss was no administrator. When higher-ups quizzed her about his performance, Farrand’s frank replies led to his firing. He was replaced by his former assistant, Raymond Cazallis Davis, who became the key figure in the library’s rise to preeminence. Davis promoted Farrand to full-time assistant librarian at an annual salary of $400. (By 1883, it was $600.) Her sister died in 1871, her mother in 1875. Farrand, fortunate to be employed, was on her own now.

The library was fast outgrowing its cramped quarters in the old Law Building, a fire-trap near the corner of State and North University. So, at Angell’s beseeching, state legislators allotted $100,000 for a grand new library building with twin towers at the center of the Diag.

By 1883, a year late, the new building was ready, and Farrand oversaw the massive job of transferring thousands of books. In the Law Building, she reclassified the collection, then dusted and marked each book for proper placement in its new home. Stacks of bushel baskets were lined with heavy paper, then filled with books. The baskets were loaded on horse-drawn drays; then teamsters hauled their literary freight a couple hundred yards to the southeast. There, Farrand directed a team of helpers who walked each book to its proper shelf.

All the while, she had been gathering articles, newspaper clippings, and reminiscences that documented the University’s history, now approaching half a century (not counting its early incarnation in Detroit).

In spare hours, Farrand began to write the book A History of the University of Michigan (1885). Though not the first U-M history, it was the most thorough, packed with revealing details and gracefully written.

Unlike earlier U-M historians, Farrand paid attention to students’ lives. She said of the women who made up the first class of “co-eds” in 1871, “they were a trusty band of pioneers; the University contained few better students.” Many male faculty and students had opposed their admission, she wrote, and “it was unpleasant to be looked upon as eccentric, but that was a trifling matter when compared with the satisfaction arising from each day’s achievement.” 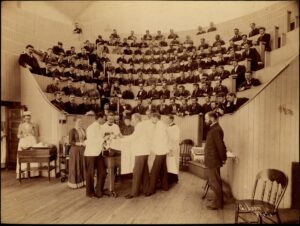 A handful of female medical students can be seen in this demonstration in a medical school amphitheater, ca. 1893. (Image courtesy of U-M’s Bentley Historical Library.)

In 1885, Farrand decided to become a student herself. Still working at the library part-time, she enrolled in the Medical Department, perhaps inspired by the career of her uncle, David Osborne Farrand, a doctor so well-known that when he died in 1883, President Angell presided at his funeral.

The photograph of Farrand and three classmates (above) hints at their milieu. Seated in what looks like the living room of a boarding house (typical quarters for all students at U-M in the era before dormitories), they gaze not at the camera but at each other, as if in serious conversation. Three of the four wear eyeglasses. All wear black. All wear their hair up or in a tight bun. Only Farrand, obviously a bit older than the others, wears the trace of a smile. They exude the studious, careerist focus perfected by female college students of the time.

After graduating in 1887, Farrand trained further at the Detroit Women’s Hospital (later Hutzel Women’s Hospital), then started her own practice in Port Huron, Mich., where she lived with another uncle and his wife.

Her friends soon included “practically everyone in Port Huron who had the honor and privilege of her acquaintance.” She became a leader in both the local medical society and the local library. When she died of breast cancer in 1900, not yet 50, two professional colleagues, both men, declared her to have been “a truly noble woman.”