From indigenous student to endowed professor 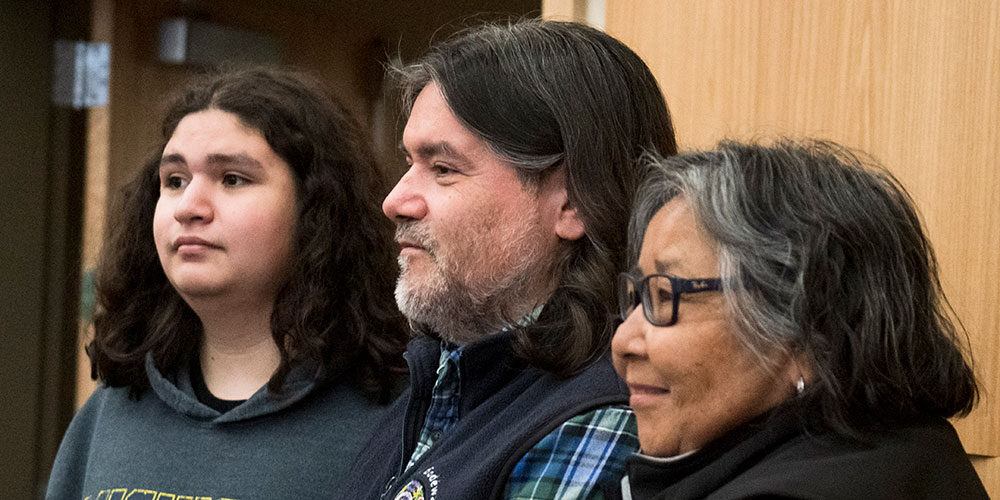 A boyhood dream to become a lawyer seemed almost out of reach for Matthew L.M. Fletcher, BA ’94/JD ’97, who grew up in Potawatomi and Ottawa Indian country in Southwest Michigan during the 1970s and ’80s. Those were hard-scrabble times, and many tribe members struggled to survive.

“My family expected me to go to college, which was unusual for a lot of Native people who come from underprivileged backgrounds,” Fletcher says. “My parents were working class, so we were very lucky compared to many of my cousins who were unemployed, undereducated, and pretty poor. We took nothing for granted.” 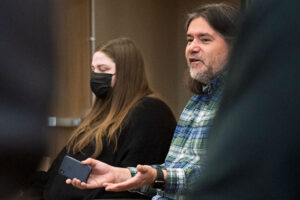 With his ambition trained on the University of Michigan, Fletcher earned good grades in public school and excelled on his high school debate team. However, he was not quite prepared for campus life in Ann Arbor when he started his freshman year in fall 1990.

“It was very much a culture shock,” Fletcher recalls. “This is a place of incredible privilege, and many people were completely unaware of what it was like to be a Native person ― or that there even were Native people on campus. To be truthful, I kept my head down, did my work, and tried to muddle through.”

Four years later, Fletcher completed his undergraduate degree with a major in English and went on to earn his Juris Doctorate degree at the Law School, fulfilling his youthful ambition to become a lawyer.

This fall his life came full circle — academically and personally — as he returned to U-M.

Fletcher is the Harry Burns Hutchins Collegiate Professor of Law, an endowed professorship honoring the former dean of the Law School who also served as the University’s fourth president. Fletcher also is professor of American culture and Native American studies in the College of Literature, Science & the Arts.

“I feel like this is kind of a homecoming,” he says. “It’s a dream come true to teach at U-M. It’s a great school.” 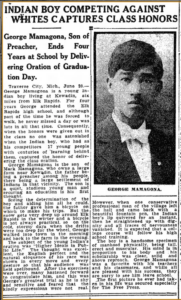 Reflecting on his student days at Michigan, Fletcher recalls watching the Fab Five etch their names in basketball history at Crisler Arena and sitting in the bleachers at Michigan Stadium with his father and younger brother, rooting for the Wolverines.

Yet even in the midst of 100,000 cheering Michigan fans, Fletcher felt like an outsider. “There were very few Native students when I was at the Law School,” he says. But he found his community once he joined the editorial staff of the Michigan Journal of Race and Law, a student-run legal publication that explores issues related to race, law, and civil rights. “At the journal, I found like-minded people of color.”

The editorial work at the journal helped to prepare Fletcher for his legal career.

“[It’s] where I learned how to write, edit, read, and research legal articles and essays,” Fletcher says. “It was important for me socially as well as for my professional development as a lawyer.”

During this time, he also began scouring U-M archives for any clues about his family’s historical ties to the University.

“Many people don’t know their history,” says Fletcher, a member of the Grand Traverse Band of Ottawa and Chippewa Indians.“It was important to me to try to figure out what my connection was to U-M while I was here on campus.”

Fletcher’s sleuthing turned up some surprises about his ancestors who, it turns out, have attended U-M since the 1900s.

U-M began officially recognizing Native American students in 1932 when the University established scholarships for “American Indians.”
According to Bentley Historical Library archivist Brian Williams, it appears Fletcher’s great-great uncle, George Mamagona, was the first Native American from Michigan to attend U-M. He was enrolled from 1908-11, but did not earn a degree. Williams discovered another Native American student who attended U-M from 1908-09 (and also did not graduate). Benjamin Hunter Dwight was a full-blooded Choctaw and a chief from Oklahoma who went on to earn degrees at Columbia and Stanford.

U-M began officially recognizing Native American students in 1932 when the University established scholarships for “American Indians,” Williams says. The scholarship recipients were recommended to U-M by the U.S. Secretary of the Interior. The first student on one of the “American Indian” scholarships to graduate appears to be Arthur Leo Biggins (AB 1942, Business 1949, Law 1952).

Nearly a dozen of Fletcher’s relatives who are tribal members have earned U-M degrees over the last century.

“For Native people, this is a huge accomplishment because so few are able to leave their reservation and comfortably matriculate at a school like Michigan,” he says.

As he embarked on his career, Fletcher knew he wanted to have an immediate impact on individuals. A large portion of his scholarship and advocacy involved the defense of the Indian Child Welfare Act, a 1978 federal law enacted to address the disproportionate number of Native American children who were being removed from their families and placed in the child-welfare system. The statute gives tribal governments greater control over child-custody proceedings involving Native children living on and off reservations.

“A number of my relatives who were taken from their homes by state and child-welfare systems and adopted out into non-Indian homes, were lost forever,” Fletcher says. “I felt this was a place where I wanted to contribute and make a difference.”

When he’s not writing for legal and scholarly publications, Fletcher writes indigenous graphic novels. His graphic novel “Lone Wolf” is about Indian lawyering, and more specifically about a practice known as “window lawyering,” where Native attorneys are used by non-Native partners for marketing but not for the work. It’s partially inspired by Jim Harrison’s novel Wolf. Read more.
The attorney’s early legal practice framed his scholarly work and inspired numerous articles on American Indian tribal law, tribal courts, and how the U.S. Supreme Court views tribal laws and tribal courts.

In 2004, Fletcher launched his academic career as a law professor at the University of North Dakota. In 2006, he joined the law faculty of the Michigan State University College of Law where he taught until 2022.

“I learned the broad contours of contract and constitutional law at the Michigan Law School,” Fletcher explains. “But tribes can choose to modify these traditional rules of law as they see fit and make significant changes that emphasize their culture and traditions. They are cutting-edge laboratories of American democracy.”

Fletcher’s judicial decisions and classroom teaching largely center around Anishinaabe legal and political philosophies, which are prevalent in tribal courts. Anishinaabe refers to a group of culturally and linguistically related First Nations that live in both Canada and the United States, concentrated around the Great Lakes.

“This is an alternate way to view the universe that permeates all the work I’ve done,” says Fletcher. His middle name, Migiziwas, references the eagle clan (migizi dodem), which is responsible for dealing with an Anishinaabe nation’s external relations. 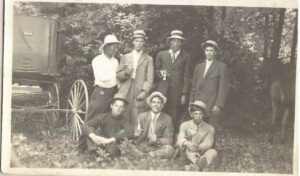 Fletcher supplied this photo of his relative George Mamagona (and friends). George was the first Native American student to attend U-M. He is on the far left, with the Block M on his belt. Click the image to enlarge. (Image courtesy of Matthew Fletcher.)

The dearth of scholarship about what Native Americans are doing in the 21st century often leads to misperceptions, according to Fletcher.

“Lots of people think of Indians and Indigenous people as being part of the past rather than part of the present,” he says. “The notion of the vanishing Indian continues to be prevalent in our society, and I often get questions about whether Indian people and tribal reservations still exist. Most people are unaware of Indigenous philosophies, so they are skeptical or even hostile toward them.”

He teaches courses on Federal Indian Law and Tribal Law at the Michigan Law School as well as classes on tribal law in the College of Literature, Science, and the Arts. In the winter term, he will teach a small seminar, titled “Reservation Dogs and the Law,” focusing on the FX Productions series, “Reservation Dogs,” created by American filmmaker Sterlin Harjo.

“I want to have a generation of students who are not so nervous about Indian people,” Fletcher says. “Students have a lot to learn from Indigenous cultures and philosophies. Michigan Law graduates will need this background in tribal law later in their practices.”

Meanwhile, the Fletcher family’s century-long, maize-and-blue tradition has been passed down to the next generation. Fletcher’s nephew, Nolan Fletcher, became a sophomore at Michigan this fall.