This winter the University of Michigan Hatcher Graduate Library offered an exhibit on political activism titled “The Whole World Was Watching: Protest and Revolution in 1968.” There were numerous photographs of activism on the Ann Arbor campus and abroad, and of activists and leaders in the anti-war, women’s and Civil Rights’ movements. 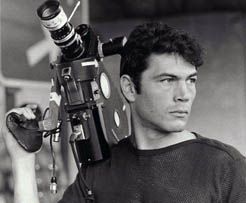 By 1968 the Ann Arbor campus had become a hotbed of student opposition to the Vietnam War. 1968 also happened to be my second year as a doctoral student at the University. Being an Army veteran who had served in Vietnam in 1962-3, I was fascinated by classmates who were committed to “the cause”—the way many of them dressed (little color, lots of Army drab), the way many talked (Che Guevera was a central talking point), the way many spoke so openly about themselves and their relationships (many hearts worn freely on shirt sleeves).Inspired by one of my activist classmates, John, I made a short 16mm documentary film, “If I Were Free,” about his commitment. The film followed his activities over a week: going to class, watching a draft card-burning ritual on the Diag, talking it up in Mark’s Coffee House on William Street. In his voice-over narration, John proclaimed, “If you want a revolution you have to get out there and talk to people.” Mark’s Coffee House was a popular place to do just that. Undergraduate would-be filmmaker Lawrence Kasdan—who went on to make The Big Chill about the almost-adults that people like John would soon become—often hung out there. The film concluded with John riding his motorbike on Saturday to Detroit’s Kennedy Square for a day of picketing. “If I Were Free” became a part of the 1968 Ann Arbor 16mm Film Festival.It didn’t take long for feature filmmakers to begin treating the protest movement in fictional narratives. Haskell Wexler’s “Medium Cool” (1969) depicted a disillusioned Chicago TV cameraman doing his job of providing sensational material—car wrecks, for example—for evening broadcast. His job also entailed covering the upcoming 1968 Democratic National Convention in Chicago, an event which promised more sensational material through anticipated student protests. What is most interesting about “Medium Cool” is that Haskell Wexler, himself a Chicago cinematographer, shot the actual event. 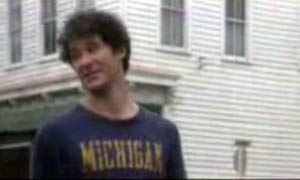 Kevin Kline as one of the U-M grads in ‘The Big Chill.’

As the student protestors and policemen fought it out in Grant Park, Wexler moved through the riots with his lead actress, filming right in the midst of the actual event. In the movie, Wexler turned the footage into a harrowing scene in which the TV cameraman (Robert Forster) helps his lover, a single mother (Verna Bloom), search through the turmoil of Grant Park for her missing son. As its McLuhanesque title implies, “Medium Cool” is a meta-textual work, in which the moviemaker questions moviemaking itself in an imaginative, “new-wave” like approach that blurs fact and fiction. Many other films were inspired by the student activism of the 1960s, three of which I consider, along with “Medium Cool,” worthy of reconsideration. There are the two activist “reunion” films: John Sayles’ “The Return of the Secaucus Seven” (1979) and Kasdan’s “The Big Chill” (1983). Each offered a dialogue-oriented script in which former student activists reflect on their idealistic college years. Sayles’ directorial-debut film, made on a miniscule budget, charted the weekend reunion of seven students who had been stopped by the police in Secaucus, NJ, as they were making their way south for a protest rally in Washington, DC. The film remains notable for Sayles’s pointed dialogue and the naturalistic performances of a cast of unknowns. The film proved that charged talk can by itself create forceful drama.”The Big Chill” offered a cinematic work of similar ilk. Former University of Michigan students from the 1960s reunite for a college friend’s funeral and use the occasion to reflect on the forces that may be pulling them away from the idealism of their youth. An undeniable force within “The Big Chill’s” artistic construct was the coordination of Motown lyrics and music (selected by Meg Kasdan) with the flow of situations and events on the screen. In his book “Boom” about the 1960’s, Tom Brokaw devotes seven pages to Lawrence Kasdan, saying “The Big Chill” is “arguably the best film made about what happened next to the ideals, loyalties, and choices of a certain Sixties set.”Last, and a favorite of mine, is Sidney Lumet’s “Running On Empty” (1988), a film about a married couple who have had to live underground since their involvement in William Ayers-style radical protest activities which included blowing up a building with an unsuspecting janitor inside. The couple have moved often, dragging their children along, assuming new names, changing schools, and devising all sorts of other schemes to protect them from detection by the FBI. Any semblance of a normal family life has been shattered in the process. When son Danny (River Phoenix), a high school senior and talented pianist, earns admission and a scholarship to Julliard, the family faces a choice: either the parents must present valid documents for their son—exposing them as fugitives—or he must decline the scholarship. The wife (played by U-M graduate Christine Lahti), husband (Judd Hirsch), and son Danny are at odds about what to do. Each of the three has opposing questions and strong emotions about any decision they might make. “Running On Empty” is a deeply moving film about the future of a family weighed down by choices made in a distant past. It is also a reminder that the radical protest politics of the 1960s caused serious and lingering consequences.