Children vs. the world

The international attention being given to “Slumdog Millionaire” got me thinking about the many other acclaimed films with children as protagonists. In many ways Danny Boyle’s film is an archetype of a traditional story in which vulnerable children face situations that require unusual personal strength to survive. It’s a story with a long and powerful presence, and it’s led to several great motion pictures. 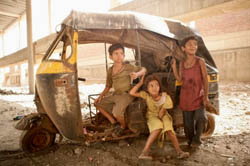 The story of ‘Slumdog Millionaire’s’ children, who must battle with their wits and will against a ruthless world, is a familiar one.

The children in “Slumdog Millionaire” must contend with stark social conditions in Mumbai’s Dharavi slum. In this slum and others, hundreds of thousands of children work in prostitution, and masses of others are forced into work as beggars. As “Slumdog Millionaire” painfully points out, many of these children are blinded or mutilated to improve their earnings. In a cutthroat underworld ruled by opportunistic adults, the innocence of the children is challenged by dark and dangerous realities. “Slumdog’s” storyline and the source of the film’s gritty charm is in the way it details the energy, wit and resilience that allow its three child heroes to survive. A central theme is that the experiences of childhood become the tickets for passage into adult life. This is a constant in many of the best youth-oriented films.Francois Truffaut’s first film “The 400 Blows” (1959) told the story of a shy young boy, Antoine Doinel, trapped in an oppressive adult world where neither his indifferent parents nor school counselors hold a clue about how to help the emotionally starved lad. Angry and lost, Antoine runs away to the city, where he turns to petty crime. In an interview after the release of “The 400 Blows,” Truffaut spoke about the consequences of one’s youth: “A man is formed between seven and sixteen. Later he will relive throughout all of his life what he has acquired between these two ages.” It was no surprise to learn that “The 400 Blows” had been drawn from Truffaut’s own lonely and troubled childhood.

The boy hero of ‘The 400 Blows’ was based on director Francois Truffaut’s own youth.

The idea of a difficult youth and its ultimate impact on later life is key to the outcome of “Slumdog Millionaire,” not only in Jamal’s ability to succeed on “Who Wants to Be a Millionaire,” but also in his brother Salim’s decision to turn to crime, with all its tragic consequences.The great neo-realist directors in post-war Italy made a number of motion pictures that helped convey the impact that the dire economic conditions – unemployment, a shortage of food and clothing – were having on the lives of ordinary Italians, particularly children.Vittorio De Sica’s two great humanistic films made just after the war, “Shoeshine” (1946) and “The Bicycle Thief (1947), are poignant accounts of a people at all levels struggling for survival. In “Shoeshine,” two innocent young boys—best friends—work the city streets for a meager income by shining shoes. Eventually the two succumb to the unjust world in which they reside and begin working in the black market. Arrested and forced into confession, the boys are shipped off to prison, their friendship and their lives destroyed. 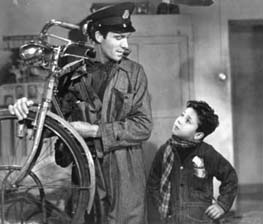 In ‘The Bicycle Thief,’ a boy’s faith in his father is tested, perhaps beyond the breaking point.

The corruption of innocence in “The Bicycle Thief” is less overtly dramatic than in “Shoeshine,” but nonetheless fraught with tragic implications. The story is simple: A father, Antonio, and his young son, Bruno, go in search of their bicycle, which was stolen on the first day of the father’s new job hanging movie posters on billboards. Because the bicycle was necessary for the job, they had just reclaimed it from a local pawn shop in exchange for the family linens—including the sheets they sleep on. They have only the weekend to recover the bicycle or Antonio will once more be out of work. As the young Bruno combs the streets with his father, we see him in a roving point of view shot, eyeing endless rows of bicycle parts for sale in a local market known as a place where stolen bicycles are broken down and resold. The imagery suggests that bicycle thievery is rampant in the city. In the course of their futile efforts to find the bicycle, Antonio turns his growing frustration on Bruno, slapping the boy on the face when he expresses impatience—an act which belies Antonio’s love and concern for his family. 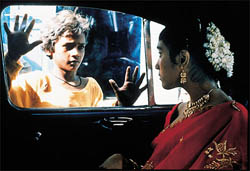 Mira Nair’s ‘Salaam Bombay’ covers some of the same territory as ‘Slumdog,’ but with much more pessimism.

As the sun begins to set on Sunday evening, father and son sit dejected on a street curb outside a soccer stadium. Antonio tells Bruno to go on home. Not knowing that the boy has missed the bus and is watching from a distance, Antonio attempts to steal a bicycle resting against the stadium wall. Immediately caught by a group of men who surround him, slap him, and taunt him with calls of “Thief! Thief!” Antonio is only released when Bruno runs to his father shouting “Papa! Papa!” As the two walk off into the crowd, tears streaming down Antonio’s face, Bruno reaches up and takes his father’s hand. The complexity in “The Bicycle Thief” rests not just in the heavy moral weight of the father’s desperate act. It is also in Bruno and how the consequences of his father’s “lesson” to his son will play out. “The Bicycle Thief” moves the theme of lost innocence into areas of psychological speculation. Clearly Bruno’s adoration of his father has been altered by the man’s behavior: a slap, an attempted theft, and shameful tears–memories that will surely echo across the years.In conclusion, it is important to point out that “Slumdog Millionaire’s” happy ending has already been countered by Mira Nair, an American-trained Indian director, in her first film “Salaam Bombay!” (1988). Nair’s story follows a young boy who leaves home for work in Bombay’s slums, performing domestic service for pimps, prostitutes, and drug peddlers.Its mise-en-scene is dark and grim as the boy is shown interacting with other oppressed children and sleeping on the squalid detritus of the slum’s open spaces. In the manner of Italian neo-realist films whose cinematic credo was “This is the way life is,” “Salaam Bombay!” never shies away from revealing that the energy and resilience of youth cannot always overcome the destructive forces of an oppressive environment. In a devastating ending worthy of the great French and Italian directors, the boy hero we’ve come to love and admire is finally taken down by the savagery of his world.