David Duke and 'Birth of a Nation'

David Duke, the former Ku Klux Klan leader and life-long racial segregationist, has recently been in the news again. In April Duke went to the Czech Republic to give lectures and support rallies being staged by neo-Nazi groups. Suspected of denying the Holocaust—a potential criminal offense under Czech law—Duke was expelled from the country. 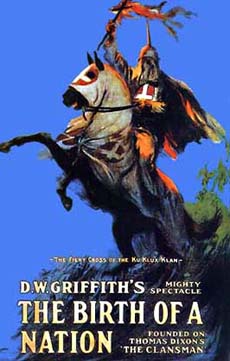 ‘Birth of a Nation,’ produced in 1915, glorified the Ku Klux Klan and still inspires racists today.

Duke’s activism on behalf of political extremists had once led me to contact Duke for an interview. Reaching him wasn’t difficult because the listing for the Ku Klux Klan in Metairie, Louisiana where he lived was a phone number that rang in Duke’s home.My interest sprang from a research project I was conducting in the 1980’s on the continued use by Klan groups of “The Birth of a Nation”—a 1915 D.W. Griffith film. After its release, the epic film quickly established itself as a propaganda vehicle for ultra-conservative organizations, and I had learned that Duke frequently showed the film for advocacy purposes at group gatherings.In my interview he told me that the Louisiana Klan owned a couple of prints and that the film was screened “for its historical value. The average person who sees it gets a good idea of what Reconstruction was about, the disenfranchisement of whites. No film or TV program today can give the pro-Klan position as effectively as “The Birth of a Nation,” Duke said.Other groups elsewhere obviously felt the same way. In 1978 a riot broke out in racially-tense Oxnard, California while the film was being shown in a community center. In 1979 in Greensboro, North Carolina, a Death-to-the-Klan rally—staged after the showing of the film in nearby China Grove—resulted in a shootout between Ku Klux Klansmen and anti-Klan protesters. Four people were killed and nine wounded. How come such an infamous legacy for “The Birth of a Nation”?Its political alliance with the contemporary Ku Klux Klan came about because Griffith’s film had forcefully broadcast to the world what revisionist historians would label “the tragic legend of Reconstruction.” The legend had evolved in late nineteenth- and early twentieth-century popular romantic fiction in which novelists depicted the South as a place of idyllic beauty whose people had been deprived by the Civil War, and Reconstruction that followed, of a charming and admirable way of life. The villains in the various novels (such as N.J. Floyd’s 1884 “Thorn In the Flesh,” Thomas Jefferson Jerome’s “Ku Klux Klan No. 40” (1895) and “Gabriel Tolliver” (1902) by Joel Chandler Harris) were manipulative Freedmen’s Bureau agents, corrupt carpetbagger leaders, and newly-freed blacks who were depicted as gullible pawns of Northern outsiders. The heroes in the narratives were the united members of the post-Civil War Ku Klux Klan. Historian William Pierce Randel argued in his centennial book “The Ku Klux Klan: A Century of Infamy” (1965) that these pro-Klan novels “conditioned several generations of Americans to tolerate the old Klan as an agency striving to preserve a beautiful civilization in its unequal conflict with the materialistic North.”Jack Temple Kirby in “Media Made Dixie: The South in the American Imagination” (1978) wrote similarly: “Reconstruction—a trauma within the memory of many in 1900—became a foolish, tragic misadventure instead of a noble conclusion to the abolitionist crusade. All that remained at the opening of the new century was further synthesis and broadcast.””The Birth of a Nation” helped do just that. The first half of Griffith’s 3-hour 45-minute epic was a starkly realistic and deeply poignant treatment of the Civil War, filled with meticulously-researched facsimiles of historical events: the signing of the Emancipation Proclamation; the First Call to Troops; the tragic, concluding war battles in Virginia; the assassination of Lincoln at Ford’s Theater. The powerful first half of the film clearly gave credence to what followed. The second half of “The Birth of a Nation” covers Reconstruction and justifies the rise of the old Klan in the late 1860s. It was based on two novels by Thomas Dixon, Jr.: “The Leopard’s Spots” (1902) and “The Clansman” (1905). Both promoted “the tragic legend of Reconstruction” and each was a huge best seller.Although both Dixon and Griffith challenged readers and filmgoers to find a single “untruth” in the novels and the film made from them, numerous inaccuracies and distortions appeared in their portrayal of Reconstruction: the depiction of the Freedmen’s Bureau as a corrupt, entirely self-serving organization; the claim that Reconstruction was a premeditated act of revenge by radical northern politicians; Griffith’s inaccurate and degrading account of the quality of elected leadership in the predominantly-black South Carolina legislature of 1871; and, most significantly, the glorified treatment of the Ku Klux Klan as a benevolent and necessary organization that helped rid the South of meddling outsiders. Yet so forceful was “The Birth of a Nation’s” docudrama treatment and political stance that on Thanksgiving Day, 1915, William Joseph Simmons, whose father had been a member of the original Klan, led a group of men to the top of Stone Mountain, Georgia, where they burned a cross in symbolic anticipation of the reforming of the Ku Klux Klan. A week later Simmons received a charter from the state of Georgia for an organization to be called The Invisible Empire, Knights of the Ku Klux Klan.Historians have argued that Griffith’s controversial film was the culminating moment for the revival of an organization that had been shut down by the Federal Force Acts of 1872. The Force Acts made the violent actions of secret organizations subject to heavy fines or imprisonment or both.The new Klan flourished and reached record numbers in the 1920s with an enrollment of nearly 4,000,000. After this peak, the organization began to shrink but retained hard-core members and leaders who would rise up in protest of the Civil Rights movement during the 1950s and 60s, and later engage in activities that targeted immigrants, e.g., Vietnamese shrimp fishermen off the Texas coast. David Duke spearheaded the vigilante patrol that operated along the California-Mexican border in the late 1970s.Julian Bond, the Georgia political leader, and numerous other observers have urged that “The Birth of a Nation” continue to be studied and analyzed for its articulation of ideas that still inspire groups like that of David Duke’s segregationist bent, and for the lesson that it holds for revealing just how powerful filmmaking—even an old silent motion picture—can be in helping shape political ideology.