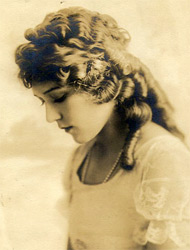 Mary Pickford, ‘America’s Sweetheart’ and one of Hollywood’s greatest stars and most powerful women, made her film debut in 1909.

One hundred years ago the American film industry was still in its infancy. Yet 1909 showed that film was an art form on the move and a medium of increasing cultural and social significance. The year saw developments that would significantly shape the future of the motion picture.1909 was the year that the fledgling film industry felt compelled to start self-policing screen content. By then there were approximately 10,000 movie theaters—”nickelodeons”—spread across the country. Filmgoers were enjoying the inexpensive one-reelers being turned out weekly by Biograph, Edison and other early production companies. But moral arbiters and social reformers—concerned about the potential influence of movies—were making themselves heard. Municipal governments were establishing film censoring boards, some even giving city policemen the authority to walk into a theater and, if displeased, close a film down. So in 1909 industry figures, with the guidance of New York’s People’s Institute, established the National Board of Censorship of Motion Pictures. Its purpose was to help stem legal interference in film exhibition. The Board’s members were representatives of religious and educational groups. Their task was to view films and offer producers their opinions on the acceptability of screen content, including desirable and undesirable subject matter.This was the beginning of the American film industry’s long history of quasi-self-regulation. The Board would be superseded in 1930 by the guidelines code of the Motion Picture Producers and Distributors of America. That would be followed by the Motion Picture Association of America’s current rating system, which went into effect in 1968 and classifies films according to their perceived suitability for various age groups. Like the 1909 Censorship Board, its purpose is to offset outside influence in film expression.

1909 can also be considered the year that D.W. Griffith proved himself a film director extraordinaire. It was his second year working for Biograph—one in which he undertook a record 145 directorial assignments. One of those 1909 films indicated Griffith’s growing awareness of the motion picture’s potential for social and political statement. It was a work which would influence filmmakers at home and abroad. The film, “A Corner in Wheat,” was adapted from realist-writer Frank Norris’ story “The Pit.” In a 12-minute one-reeler Griffith created a powerful narrative about a wheat tycoon whose greed drives up the price of bread, with dire consequences for the poor.

D.W. Griffith directed the seminal short film “A Corner in Wheat” in 1909. In it, he pioneered a style that Sergei Eisenstein would later call a “montage of collisions.” Stark, almost still shots of bread lines (above) were juxtaposed with high-energy scenes of upper class opulence (below). Such contrasts of style and content are still used in TV commercials and by documentarians like Michael Moore.

Using poetic bookends to frame the story, Griffith begins and concludes “A Corner in Wheat” with a visual rendering of Jean Francois Millet’s 19th-century painting “The Sower.” The rendering offered a stylized tribute to the hardworking, dedicated farmer.In the story proper, as the wheat merchant’s tactics bring higher grain prices in the marketplace, Griffith crosscuts between contrasting pictorial tableaux of the poor waiting in line to buy bread (which many can no longer afford) with shots of an extravagant banquet being held at the tycoon’s mansion. The guests raise their wine glasses in tribute to their host’s success in achieving “a corner in wheat.” Shots of the beleaguered poor are stark and composed with such stillness they’re like freeze frames, while those in the tycoon’s banquet hall are animated with hedonistic gaiety. These pictorial juxtapositions, opposites in both style and content, gave Griffith’s commentary enormous persuasive force. Russian filmmakers of the 1920s, most notably Sergei Eisenstein, studied Griffith’s film methods and adopted them in their own politically-charged films made in support of the new Soviet state. Eisenstein labeled Griffith’s juxtaposition of opposites “montage of collision.” The technique remains a major strategy of documentarian Michael Moore and others engaged in filmmaking which seeks to cajole viewers into an awareness of social and political issues. Moore’s current film, “Capitalism: A Love Story” mirrors in both form and content Griffith’s “A Corner in Wheat.” Also in 1909, 16-year old Mary Pickford appeared on the screen for the first time in Biograph’s “The Violin Maker of Cremona” and in D.W. Griffith’s suspense melodrama “The Lonely Villa.” Five years later Pickford was offered $2,000 a week for her work in “Tess of the Storm Country.” To promote the film, producer Adolph Zukor billed Pickford as “America’s Sweetheart”—a sobriquet that would remain with her throughout her career. Ten years later, Pickford joined with Charlie Chaplin, Douglas Fairbanks, and D.W. Griffith to form United Artists, organized for the purpose of distributing their own films and thereby maintaining greater artistic control over their work. Finally, on the technical side: in 1909, 35mm film, first supplied by George Eastman in 1892 to Thomas Edison and WKL Dickson, was accepted as the international gauge standard for motion picture production. While narrower and wider gauges have appeared over the course of film history, 35mm has remained the predominant gauge.

Postnote: In my piece last month on film versus high definition video I used the term ‘celluloid’ in distinguishing emulsion-derived film imagery from that of video imagery.

In an email, Norm Radin wrote to point out that celluloid was the chemical name given to cellulose-nitrate, a highly flammable film stock that was eventually replaced by cellulose-acetate. Mr. Radin is correct. Yet over the course of motion picture history, “celluloid” has been used by writers and critics as a generic term for the emulsion-derived medium of film. Vito Russo’s book about gays in film, “The Celluloid Closet,” and Jacquelyn Kilpatrick’s study of the portrayal of Native Americans on the screen, “Celluloid Indians,” are examples.