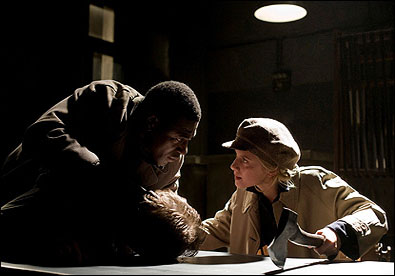 THE VIOLENCE IN ‘INGLOURIOUS BASTERDS’ IS GRAPHIC AND RELENTLESS.

As with each of his previous films, Quentin Tarantino’s Inglourious Basterds is a challenging experience. First, one has to tolerate the extreme violence, for which Tarantino’s designed-to-shock imagination apparently knows no limits. The movie, a surreal fantasy that begins with the title “Once upon a time—” is the brutal tale of an American Army squad in German-occupied France during World War II. Their mission: to track down Nazis and offer them the torturous fates the squad believes they deserve. Brutal torture is indeed their forte, and Tarantino relishes it.

In a sense the violent fantasy can be seen as a mocking response to the Nazis Einsatzgruppe death squads who followed behind German combat units, locating and killing intellectuals, Jews, and other “undesirable” civilians. The Nazi Einsatzgruppen were merciless in carrying out their deadly missions and so too are Tarantino’s “inglourious basterds.”

But if Tarantino’s violence is nearly unwatchable, his other passion—film history—makes Inglourious Basterds a delightful puzzle of allusions and playful references to long-forgotten movies and stars. Like many of Tarantino’s works, the entire script seems to be inspired by other films. (It should be noted, however, Tarantino’s film is not a remake of the 1978 Italian film with a similar title).

Some of the extreme tactics of the basterds, for example, seemed to allude to Hollywood-style cowboy-and-Indian films. But the real spectacle is in Tarantino’s weaving of German film history into the plot. Film was a vital part of the Nazi machine. When Joseph Goebbels became Hitler’s propaganda minister in 1933, he immediately employed the motion picture as a primary vehicle of persuasion. In this movie, Goebbels is a central character, a committed master of popular-culture manipulation. Goebbels, Hitler, and other Nazi party officials were especially taken with German mountain films set in the Alps and popular for their adventurous display of climbing sport and skiing. These movies were thought to convey the qualities of Aryan purity and physical superiority that were Nazi ideals for the German race. 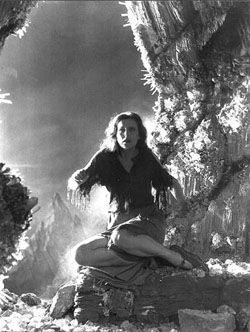 FILMMAKER LENI RIEFENSTAHL IS A HOVERING PRESENCE IN “INGLOURIOUS BASTERDS.”

Nazi Germany’s adulation of mountain films become part of the narrative in Inglourious Basterds’ Parisian sequences, with Tarantino creating the character of a beautiful mountain-film star who is a double-agent working against the Nazis. There are also numerous references to Leni Riefenstahl who was a star of silent mountain films in the 1920’s and who came to Hitler’s attention in 1932 when he saw her in The Blue Light, a film which Riefenstahl directed, edited and starred in as an athletic mountain girl named Junta.

As a result she was offered the job of “documenting” Hitler’s full ascendancy to power at the Nazi party rally in Nuremberg in early September 1934. That film became the brilliant and notorious Triumph of the Will.

Tarantino’s allusive dialogue also uses the title of one of Riefenstahl’s silent mountain films, The White Hell of Pitz Palu, as a clever moment of suspense when the identity of a British-sent operative is challenged by a Gestapo major.

The plot thickens as Goebbels, Hitler, Ruttman and other German figures gather in Paris for the premiere of a propaganda film, Nation’s Pride, about the heroics of a German soldier who single-handedly killed more than a hundred foes. (A playful allusion to the American WW II film hero Audie Murphy?) The film is to be shown at a cinema owned by Shoshanna, a beautiful woman, secretly Jewish, whose family has been murdered by the Nazis. She has her own deadly plan for the gala premiere, one that involves a hoard of highly flammable nitrate-based film prints that fill her projection storage room. It’s the perfect ironic, reflexive plotting gimmick for bringing Tarantino’s surrealistic payback fantasy to a fiery climax: film as the means of destroying Hitler and his media-inspired cronies.

Another fleeting moment of historical film interest occurs in a cocktail party scene where Emil Jannings, the great German silent film actor, is identified as one of the prominent figures who have traveled to France for the propaganda-film premiere. The Swiss-born Jannings starred in two of Germany’s great subjective-camera films, F.W. Murnau’s The Last Laugh (1924), and E.A. Dupont’s Variety (1925), then left the country for work in the United States in the late 1920s. 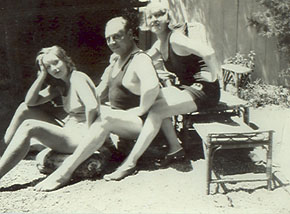 I had become curious about Jannings after Rudolf Arnheim, the noted film and art theorist, gave me a candid snapshot he’d taken on a Hollywood backlot of Jannings, his actress-singer wife Gussy Holl, and Greta Garbo, circa 1928. In 1933, Arnheim, like many German intellectuals and artists, left Nazi Germany for good, living first in Italy, then in the United States, eventually spending most of his retirement in Ann Arbor.

I was impressed by how rather typical-looking these celebrities were in Arnheim’s snapshot. Jannings, in contrast to Arnheim, went the other direction, embracing the Nazi cause. In the ’20s, the actor found considerable success in Hollywood silent movies. He won an Oscar in 1929 for his work in The Way of All Flesh and The Last Command. But then came the Talkies.

Jannings’ heavy accent doomed his American career. He returned to Germany to make The Blue Angel (1930) with Marlene Dietrich, a final memorable performance on the screen. Afterwards, an ardent supporter of Hitler, he appeared in a number of Nazi propaganda films, and for this effort Goebbels honored Jannings in 1941 by declaring him “Artist of the State.” Not surprisingly, Jannings’ film career died with the Nazi regime.

Thus it is appropriate that Tarantino imagines Jannings’ appearance at a Goebbels propaganda event in Inglourious Basterds. It’s another of the many insightful film references that enrich this inventive screen fantasy. It’s always extra fun when a filmmaker’s knowledge of the motion picture’s past history enters into a movie’s experience and in the process creates its own lingering memories.