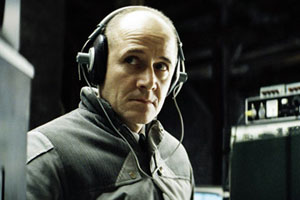 Best film of the decade?

The first decade of the 21st century is now behind us, and it was filled with earth-changing events, from 9/11 to ongoing wars to the election of America’s first black President. Though obviously smaller in significance, change shook the movies and the movie industry too. Here are some of the biggest:

As with the rest of society, the digital age is altering almost everything about movies: the way they’re made, their content, and the way they’re watched. The rise of digital projection was a major technological development, pushing film itself to the sidelines. No longer do projectors need to beam light through reels of rolling film. Now digital projectors can “throw pixels” against a screen—no film needed. Part of the drive toward digital projection arose from digital cameras. Early in the decade, George Lucas made the first all-digital live-action movie (“Star Wars Episode II: Attack of the Clones,” 2002). The digital images had to be converted to film in order to be shown at theaters with traditional projectors.”Attack of the Clones” left much to be desired in almost every way. But Michael Mann’s “Public Enemies” (2009) revealed the potential aesthetic power within high-definition video “filmmaking.” Mann’s last-days’ story of gangster John Dillinger and the social and economic times in which he lived is captured in expressive imagery that I previously thought belonged solely to film emulsion-derived imagery. “Public Enemies” was for me, literally, an eye-opener.

The death and rebirth of communal moviegoing

Digital content has implications beyond theatrical projection. It also means that movies can be streamed over computers and televisions or stored on a smartphone and carried around in your pocket. Theaters, like record stores in the 1990s, have become increasingly irrelevant.But at the same time that digital is making theaters less necessary, it is also creating new opportunities for communal experiences.Simulcasts of musical and theatrical events, for instance, are booming: Hannah Montana concerts, “live” opera performances from the Met and plays from London’s National Theatre. These “live” viewing events have given movie theaters a source of income. But they’ve also reconnected movie houses to their more traditional social function—going to live theater. Even though mediated through a movie screen, it’s a communal, exciting event in ways that ordinary movie-going has not been recently. Likewise, 3-D movies have capitalized on digital projectors. 3-D films proved a rapidly-passing fad in the 1950s. But now the artistry and dramatic value being seen in 3-D imagery seem to have driven away the “gimmick” label that earlier doomed the technique. In fact, the ’00s now look as if they were preparing the way for the decade’s last and perhaps biggest film, “Avatar.” It is a stunningly beautiful movie that demands to be seen in 3-D on a big screen. It shows 3-D’s magical possibilities for enhancing screen fantasy, and, ironically, for creating a more dreamlike experience, rather than one that is real-world-like in its visual effect.

As for content trends, especially notable was the intensity and violence of neo-noir narratives. Growing out of the 1990’s influence of Quentin Tarantino (“Reservoir Dogs,” 1992) and John Dahl (“The Last Seduction,” 1994), films like “Dirty Pretty Things” (2002), “A History of Violence” (2005), and “In Bruges” (2008) took insensate violence and sociopathic behavior to seemingly unrestrained levels of display. Moral questions raised by these films often went unresolved, both engaging filmgoers and baffling them at the same time. 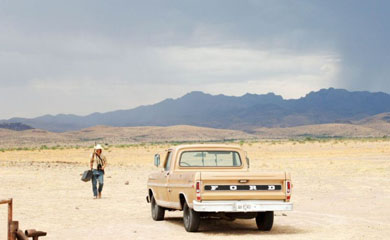 A still from the Coen brothers’ ‘No Country for Old Men.’ As a group, the Coens’ movies ranked as the best of the 2000s.

The most heralded example of this trend was “No Country For Old Men” (2007), a sordid tale of uncontained violence directed by the Coen Brothers. In my estimation the Joel and Ethan Coen director-screenwriter team burned brighter on the cinema stage over the past 10 years than that of any other American filmmakers. Beginning with the “Odyssey”-inspired “O Brother Where Art Thou?” (2000) and ending with the brilliant “A Serious Man” (2009) this sibling duo proved themselves time and again masters of wacky screen intrigue, manifest in all sorts of genre variations: noir (“The Man Who Wasn’t There,” 2001); screwball comedy (“Intolerable Cruelty,” 2003); black comedy (“The Lady Killers,” 2004); and satire (“Burn After Reading,” 2008). So highly regarded was their wacky auteur styling that a film like “The Men Who Stare at Goats” (2009) was seen by many as a lesser-quality imitation. The Coen brothers’ inventiveness and talent dominated the decade.Also of note, like it or not, were the works of Michael Moore. The Flint, Michigan, native became the most successful, commercially-enduring documentarist ever. His “everyman” screen persona and docudrama explorations continued to titillate, infuriate and score at the box-office with takes on guns and the NRA (“Bowling for Columbine,” 2002), the George W. Bush administration (“Fahrenheit 9/11,” 2004), US healthcare (“Sicko,” 2007), and Wall Street (“Capitalism: A Love Story,” 2009). 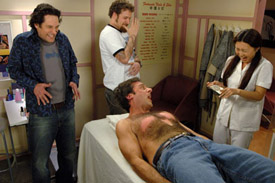 Judd Apatow’s movies, such as ‘The 40 Year Old Virgin,’ told often-vulgar stories about confused young men that still managed to be hilarious.

Another film figure of innovative significance was the screenwriter-producer-director Judd Apatow. Apatow led a gender-emphasis movement in American movies with often raunchy narratives about amiable young men dealing with confusion and uncertainty in their lives. Apatow’s works, which some critics labeled “arrested development” stories, included “Anchorman” (2004), “The 40 Year Old Virgin” (2005), “Knocked Up” (2007), “Superbad” (2007), and “Pineapple Express” (2008). Following Apatow’s lead were David Dobbin’s “Wedding Crashers” (2005), John Hamburg’s “I Love You Man” (2009), and Todd Phillips’ “The Hangover” (2009). A number of powerful films—domestic and foreign—were memorable for their treatment of human sexuality in both personal and political contexts. Wong Kar-wai’s “In the Mood for Love” (2000) was a beautifully nuanced study of passion and restraint between a couple who encounter one another while their spouses are away for an extended period of time. Not since “A Brief Encounter” (1945) has there been a more moving film about suppressed desire. “Brokeback Mountain” (2005), Ang Lee’s account of two tortured gay cowboys, must be regarded as a major breakthrough for sexual candor in American film. Similarly, Gus van Sant’s “Milk” (2008) deserved its praise for the treatment of gay San Francisco supervisor Harvey Milk. Sean Penn’s charismatic portrayal of Milk and his gay-rights mission resulted in a biographical picture of admirable socio-political significance. Ang Lee’s sexually-charged “Lust, Caution” (2007), set in 1930s Shanghai, involved a beautiful Chinese student who is recruited into a resistance movement. Her assigned role is to engage in sex with an official who is in collaboration with Japanese occupiers and lure him into an assassination scheme. The emotional complications which ensue, following a series of torridly explicit encounters, made for a powerful psychosexual drama.Finally, the past decade also saw the rise of the “multi-tasking” screenplay, in which themes and ideas develop through a complex narrative structure following a broad set of major and minor characters. Four of the best were “Traffic” (2000), a film about drug trade across the US and Mexican border and its consequences for no fewer than 20 primary characters; “Crash” (2005), a multi-subplotted account of racial and ethnic tensions in contemporary Los Angeles, won Oscars for Best Picture and Best Screenplay; “Syriana” (2005), a Byzantine drama about American oil interests and political intrigue in the Middle East; and “I’m Not There” (2007), in which six different actors (one a woman) portray Bob Dylan in sequences designed to project key moments in the singer’s public and private life.

The best of the decade? Dozens of films stood out as memorable additions to screen art. I’ll be brief and provide a partial listing of some of my choices:

If there is one film that stands out above all the others made in the past decade in my opinion it would be the “The Lives of Others” (2006), the ironic and frightening story of government surveillance of artists in Communist-held East Berlin in 1984. This Oscar-winning German film offered a tense, brilliant drama about the consequences of suspicion and doubt within a police state, but also a film which concluded with the conversion and redemption of one of the perpetrators engaged in the snooping activity against good and decent people. Meeting the ultimate test of a great film, “The Lives of Others” is one I want to revisit often.