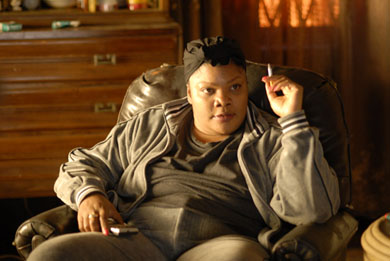 Of all the fine 2009 year-end movies—and there were many—two have remained in my thoughts above all others: “The Messenger” and “Precious.” Each contained subject matter of the darkest kind. Oren Moverman’s “The Messenger” was constructed around a grim military detail in which two Marines notify the next-of-kin (NOK) of the death of a loved one overseas. The job has very strict rules regarding protocol (knock, no doorbells; no conversation with the NOK except that prescribed). One of the Marines, Tony (Woody Harrelson), is a practiced veteran in Casualty Notification, seemingly hardened by the work. The other younger Marine, Will (Ben Foster), has just been placed on the detail and is nervously wary as Tony gives him the by-the-book instructions. That’s the narrative setup for what’s to follow, with plenty of expected and unexpected emotional turns along the way.Lee Daniels’ “Precious: Based on the Novel ‘Push’ by Sapphire,” involves the bleakest of narrative elements, including parental abuse and teenage pregnancies at 14 and 16 for the protagonist Claireece “Precious” Jones. Claireece (Gabourey Sidibe) is the victim of rape by her father and merciless verbal badgering by her foul-mouthed mother (Mo’Nique). Hugely obese and illiterate, Claireece sees herself as totally worthless, and she ambles through life like a benumbed zombie. Her only functional roles are cooking for her ungrateful mother and making periodic trips to a social worker (Mariah Carey) for welfare-check authorizations for herself and her two-year old daughter who was born with Down Syndrome. The grimness of all this is overwhelmingly shocking and sad. Some of my friends decided to skip “Precious” because they had read of its darker-than-dark story-line; and similarly I heard that filmgoers were staying away from “The Messenger” because the idea of a film about a military casualty notification team sounded too much like a downer. 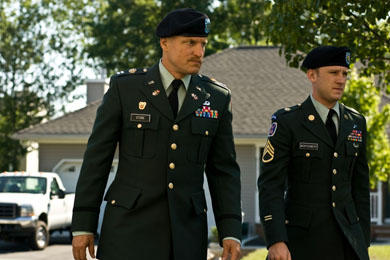 Woody Harrelson and Ben Foster star as Marines who deliver bad news in ‘The Messenger.’

In my opinion, that’s too bad. Each of these films possesses a powerful naturalistic tenor that gives them compelling authenticity. For “The Messenger,” director Moverman prohibited Harrelson and Foster from reading the parts of the script that contained the next of kin’s dialogue reactions to the news of a loved one’s death. This approach served to counter and chip into the cynical by-the-book façade the two men were expected to display. In facing the emotional reactions of the NOK, Will and the ever-cynical sounding Tony, cannot help but absorb the implications of their devastating roles as death messengers. Most notably, “The Messenger” takes an unexpected turn when Lara (Samantha Morton), a military wife, is informed of her husband’s death and is openly sympathetic toward the mens’ unpleasant mission. Will, who is a psychologically and physically scarred Iraqi veterean with only three months of service left, becomes intrigued with Lara and—moving outside his orders—befriends her. The touching, but restrained bonding between these two injured souls is filmmaking at its most compassionate. Ben Foster and Samantha Morton are marvels at generating pure and realistic emotion. “The Messenger” may be dark but it is also reaffirming in its honest candor about death and ongoing life. 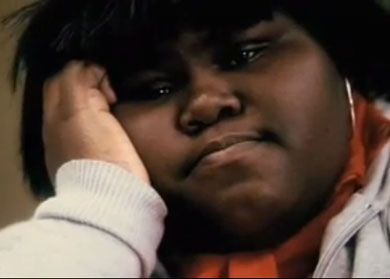 Gabourey Sidibes is magnificent as Claireece in ‘Precious.’

And neither does “Precious” remain entirely in darkness and hopeless futility. Lee Daniels gives us a film that is developed around authentic naturalistic styling, but his approach in dimensioning Claireece’s character includes the cinematic technique of “photographed thought.” In a rape scene we see her reimagining herself as the glamorous star of a musical video, being happily wooed by a handsome young man. As she dresses for a day at an alternative school where she has found an inspiring teacher and young women friends who are also on the rebound, Claireece looks into a mirror and she sees herself—in another “photographed thought” moment—as a beautiful, lithe blonde-haired woman. Daniels’s creative camera inventions imbue a seemingly lost soul with dreams and longings like those of any 16-year old girl. The acting in “Precious” is nothing short of magnificent. If you see the film you will never forget Gabourey Sidibes’ heartbreaking portrayal of Claireece. And Mo’Nique’s seemingly–improvised monologue in the presence of the social worker, Miss Weiss, is as emotionally draining as anything I’ve yet seen on the screen. Claireece is in the room and hears her mother’s confessional litany of the many egregious ways she failed to intervene on behalf of her daughter. Shocking? Yes, beyond belief, but the words are the final “push” for Claireece to move on and seek new direction for her life.”Precious” and “The Messenger” should not be ignored for their bleak subject matter. True, neither is a happy film, but in the end each is able to project a sense of hope and survival. In spite of it all, these are reassuring slice-of-life dramas.