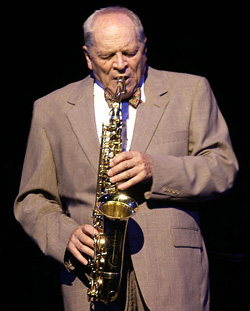 Two prominent, interconnected figures in motion picture history—both Brits—died recently, within weeks of one another: Alan Sillitoe and Sir John Dankworth. Film buffs will remember Sillitoe as the Midlands novelist whose seminal books “Saturday Night and Sunday Morning” and “The Loneliness of the Long Distance Runner” became motion pictures that helped popularize what would be known as the “kitchen sink” realist/”Angry Young Men” movements in British cinema, theater and literature. Sillitoe died on April 25 and Sir John Dankworth on February 6. You ask—”Sir John who?” Dankworth, a bandleader, composer and music educator, was the central figure in making jazz an aesthetic component of several films which together signaled a revolutionary New Wave in British cinema in the 1960s.

Jazz had appeared in motion pictures almost from the arrival of “talkies,” but most commonly it was diegetic music—that is, music which originated from an on-screen source: a band performing in a club, or jazz emanating from a phonograph player or a radio set that was visible on screen. In a memorable moment for on-screen jazz performance Duke Ellington came to Michigan’s Upper Peninsula in 1959 for a short gig in a bar scene for the courtroom film “Anatomy of a Murder.”

With an increase in the number of gritty urban narratives in the 1950s, jazz began to work its way into the music score, adding a vibrant sense of modernity to the soundtrack. Leonard Bernstein’s jazz-oriented compositions for “The Man with the Golden Arm” (1955) paved the way. Johnny Dankworth’s historic place in that movement came about at almost the very same moment in Britain, after 25 years of building jazz into a musical presence in the country. His story is a fascinating one.Born in 1927 in Walthamstow, England, Johnny Dankworth—as he would be known professionally—took an interest in jazz as a youngster and by his mid-teens was playing clarinet in local dance bands. He would later give up the clarinet for the alto saxophone, an instrument he made his own. His musical talents won him entry in 1944 into the Royal Academy of Music, though that school didn’t look upon jazz with any special fondness. Following service in the RASC, playing in an Army dance band, Dankworth and his associate Ronnie Scott landed jobs as musicians on trans-Atlantic crossings of the Queen Mary. The ship’s in-port stays in New York provided an opportunity for the two men to check out the city’s bebop clubs. They became especially enamored of Charlie Parker and, back home, began to develop a bebop style of their own. The Johnny Dankworth Seven—his first band, assembled in 1950—helped build bebop’s popularity in England. 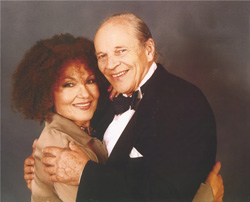 Dankworth married singer Cleo Laine, and the couple soon became one of the most popular and beloved musical partnerships in British music.

In 1951, the band took on an unknown and untried singer named Clem Campbell. Supposedly drawing from a list of names devised by the band and tossed into a hat, Clem Campbell was re-dubbed “Cleo Laine.” She would become one of jazz’s greatest singers. Dankworth and Laine were married in 1958, creating one of the all-time great jazz partnerships. In 1959 Laine, Dankworth and the band became the first British group to perform at the Newport Jazz Festival. Never quite comfortable with his position as a bandleader, Dankworth increasingly shifted toward his first love: composition.Meanwhile, driven in part by writers who shared the outlook of Alan Sillitoe, British cinema was beginning a shift toward social realism. The movement had its beginnings in six “Free Cinema” programs— presented by the National Film Theatre between 1956 and 1959—made up primarily of short documentaries about the everyday lives of Britain’s working class. The “Free Cinema” aesthetic soon spilled over into fiction, theater and film. One of the most popular and influential of the short class-conscious documentaries was “We Are the Lambeth Boys” (1959), Karel Reisz’ study of urban boys in a London youth club. Reisz thought that traditional music didn’t fit the documentary’s straight-forward treatment of British youth culture, so he asked Johnny Dankworth to compose a jazz score for the soundtrack. Dankworth watched the film, which he said he found sad but sympathetic, and then improvised a hip, modern jazz accompaniment that was both vibrant and plaintive. It was the onset of a musical sound that would become inextricably associated with Britain’s cinematic New Wave.The following year Reisz asked Dankworth to score the music for the film adaptation of Sillitoe’s “Saturday Night and Sunday Morning” (1960). Reisz’s forthright treatment of a young factory worker’s (Albert Finney) drab daily life and his evening drinking and womanizing gained from Dankworth’s moody jazz score. Significantly, the music proved that jazz could supply emotionally varied accompaniment to screen drama.Dankworth described jazz’s evocative power in his 1988 autobiography “Jazz in Revolution”: “Jazz can be spiritual, cerebral, motivating or moving. It can evoke tension, relaxation, laughter or tears.”With “Saturday Night and Sunday Morning” Dankworth’s new career in film scoring was up and running. That same year, 1960, he created the music for “The Criminal” and then in 1963 for “The Servant,” both directed by the blacklisted American expatriate Joseph Losey. Cleo Laine sang “Thieving Boy” in “The Criminal,” and “All Gone” in “The Servant.” Harold Pinter, the future Nobel laureate, wrote the screenplay for “The Servant” and the lyrics for “All Gone.” Pinter’s screenplay was a highly nuanced psychological drama about the manipulation of an upper class gentleman (James Fox) by his male housekeeper (Dirk Bogarde). The tensions between the two characters were abetted by variations within the plaintive songs and the jazz scoring. In his biography of Dankworth and Laine called “Cleo and John,” Graham Collier quoted Dankworth as saying that for the song “All Gone” the idea “was that the same song should change imperceptibly to spell out the degeneration of the situation. The first time the song was played it was quite straight forward, then it crept into the minor key, then it came with interjections from tenor sax, and in the last case it was done in almost an atonal way with Cleo singing right through what was in those days a cacophonous background.”For the 1965 film “Darling,” which critics would say pretty much defined 1960s swinging London, director John Schlesinger hired Dankworth to create the multi-varied musical score. In my estimation “Darling,” with Julie Christie in the title role, remains one of the greatest of modern British films. Altogether Dankworth scored more than 20 films, including the other memorable Joseph Losey-Harold Pinter collaboration “Accident” (1967). Dankworth and Laine in later years turned to musical education, building an auditorium called The Stables on the grounds of their home where performers from every musical genre were invited to showcase their talents. In 1997 Cleo Laine was named a Dame and in 2006 Dankworth was knighted by Queen Elizabeth.Next month I’ll focus on Alan Sillitoe, including an account of the fortuitous way he became involved with University of Michigan students in the London Summer Study Abroad program.

In the meantime, I’d like to hear what you consider to be memorable jazz scores from movies. One of mine is Arthur Penn’s “Mickey One” (1965), score by Eddie Sauter with Stan Getz solos. How about you? Share your favorites in the comments section.