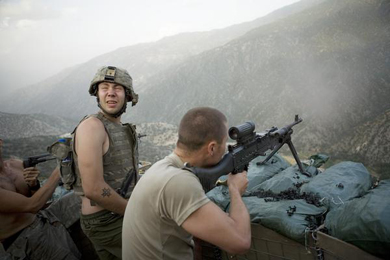 The documentary ‘Restrepo’ is an astonishing, ruthless look at war through the eyes of soldiers on a remote outpost in Afghanistan.

Historically there have been two general kinds of war documentaries: those that are inquiries into the politics and issues surrounding war, and those that focus on combat missions and stay centered on the soldiers. Peter Davis’ “Hearts and Minds” (1975) and John Huston’s “The Battle of San Pietro” (1945, originally titled “San Pietro”) are, respectively, classic examples of each type.

“Hearts and Minds” was an inquiry into the politics of the Vietnam War—what and who drew the US into the war and what factors and politicians sustained it for more than a decade. A more recent example of the politics-of-war documentary is Errol Morris’ “The Fog of War” (2003), a talking-head reminiscence with Vietnam War-era Secretary of Defense Robert McNamara. I recently saw the award-winning documentary “Restrepo” (2010), a soldier-focused film which, in its gritty view of men at war, reminded me of “The Battle of San Pietro.” Each, though about wars 65 years apart, is an example of the combat documentary at its memorable best. 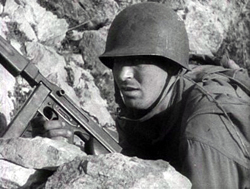 A still from John Huston’s ‘The Battle of San Pietro,’ a classic documentary about a World War Two battle that cost 1,000 American lives.

“The Battle of San Pietro” was produced near the end of World War II by the Army Pictorial Service as a training film for U.S. soldiers, with a shorter version intended for general theatrical release. John Huston and his cinematographers, led by Jules Buck, moved with American troops through Italy’s Liri Valley between October-December 1943, advancing toward retreating Germans who were ensconced in the rugged mountains above the Liri Valley.

The American mission, resulting in a three-month battle, was to reclaim San Pietro, a small farming village of 1,400 Italians—most of whom had been annihilated by the Germans. The unprotected open slopes of the mountains made the U.S. soldiers easy targets, and more than a thousand men would die by enemy fire before the battle ended. Huston captured the deadly mission with unusual immediacy in grim black-and-white imagery. Shells explode at camera range, soldiers fall, bodies are shown being wrapped into white storage sheets. The film was introduced by Gen. Mark Clark; Huston himself read the voice-over narration in a straightforward, reserved manner, guiding the viewer through the battle’s logistics and progress.

Not surprisingly, Army officials briefly tried to suppress the gritty film, claiming that it harbored an anti-war stance and was not appropriate for public showings. Others in the Defense Department differed with that view and in May 1945 “The Battle of San Pietro” was issued for theatrical release. In 1991 the film was selected for inclusion in the United States Film Registry by the Library of Congress.

“Restrepo,” this year’s Sundance Grand Jury winner for best documentary, similarly finds its subject in a group of American soldiers in combat, men undertaking a challenging and dangerous mission. Directors Tim Hetherington and Sebastian Junger (who also wrote a book, “War,” based on the same material) and their camera crew went with a U.S. airborne infantry platoon of 15 men into Eastern Afghanistan’s Korengal Valley, an isolated area near the Pakistan border. Between May 2007 and July 2008, the crew shot 150 hours of footage, charting the soldiers’ mission in a distant outpost which the men name Restrepo in honor of the first of their comrades to be killed by the enemy, Juan “Doc” Restrepo, a medic. The platoon’s military task is two-fold: to make reconnaissance search-and-destroy forays against the Taliban and to win over locals to the American cause through tete-a-tetes with village elders. Leading the mission is the charismatic and articulate Captain Dan Kearney, a man whose verbal abilities are employed to pump up the sagging morale of his dedicated but often frightened and frustrated “why are we here?” platoon. Those same skills are put to use in trying to persuade the villagers that their support for the U.S. Army presence in the Korengal Valley will benefit the local economy.

What is conveyed in “Restrepo”‘s 90-minute condensation of a 15-month combat mission is a classic tale of men at war: dutiful military service framed by uncertainty, confusion, exasperation, and a nagging awareness of vulnerability within what the soldiers call “no man’s land.” The men are brave in their defense of Restrepo and in reconnaissance encounters with the enemy but seem unable to fathom the sudden violent death of a platoon member—though that possibility has never left their thoughts. One soldier, reacting to the death, loses it entirely, sobbing uncontrollably and shouting, “We’re all going to die.”

“Restrepo” captures not only the soldiers’ bravery and terror, but also the tedious routine in between: digging holes, filling sandbags, cleaning gun barrels, idle male chatter, stress-relieving horseplay. With 150 hours of footage to work with, Junger and Hetherington are able to present an honest and unforgettable account of 15 soldiers at war, and to reveal each of them as a living, feeling individual—a rarity in combat documentaries. Whereas John Huston filmed the U.S. soldiers in “The Battle of San Pietro” only from their backs, “Restrepo”‘s cameras are up-front and piercingly personal. Adding to the humanity of the film are post-evacuation interviews with the soldiers that are powerful for both their imagery and their introspection. Shot in close-up high-definition video against a limbo background, the interviews are intercut with the mission activity at Restrepo. Individually, the men speak of their reactions to the combat experience and what effect it had on each of them. One says that he doesn’t ever want to lose the memory of the death of a comrade, because the memory reminds him of what he now has in life. Further, the interview imagery forces the viewer to look directly into the faces of young—very young—combat veterans and to grasp how much has befallen these innocent-looking men. Like “The Battle of San Pietro,” “Restrepo” is an unforgettable and moving study of war and its grim consequences for those who fight it.

Have you seen “The Battle of San Pietro” or “Restrepo”? What other combat documentaries are worth watching, and why? Share your thoughts in the comments section.