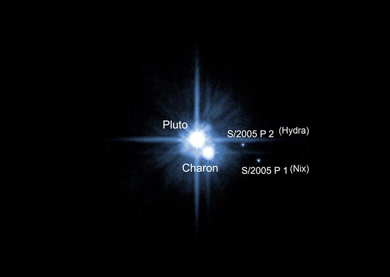 How hard was it to find Pluto in 1930? It is so far away that even today, this is one of the best photos of Pluto (and its three moons) available. It was taken by the Hubble Space Telescope. (Photo courtesy NASA.)

Last month a group of astronomers at the Lick-Carnegie Exoplanet Survey announced the discovery of the first so-called “Goldilocks planet.” Gliese 581g (also dubbed “Zarmina’s World” by its discoverer, UC Santa Cruz astronomer Steven Vogt, who has romantically named the planet after his wife) is the first rocky planet outside our solar system known to be situated “just right” for life—that is, within the habitable zone of its star.

Michael Byers’ novel “Percival’s Planet” tells the story of Clyde Tombaugh’s hunt for Pluto—and of a constellation of dreamers, lovers and weirdos who gather near Flagstaff, Arizona during the Great Depression. Check his blog for more about the discovery of Pluto and the writing of the novel.

While its possibilities for harboring life have attracted new attention to the continuing search for other worlds, Gliese 581g is just one of hundreds of exoplanets located during the last few years. More than 20 lightyears from earth, its discovery calls to mind the amazing story behind the discovery in 1930 of what was, for a time, the most distant known planet—Pluto. This year is the 80th anniversary of Pluto’s discovery, and it’s fair to say that the pace of discovery is, to say the least, accelerating.The six planets in outward progress from the sun—Mercury, Venus, Earth (naturally), Mars, Jupiter, and Saturn—have been known from antiquity. The seventh planet, Uranus, was accidentally discovered in 1781 by William Herschel, who, over the course of a few days in March of that year, observed an object moving steadily against the unmoving background stars. Herschel initially reported his finding as a comet, but by 1783 his and others’ observations had confirmed the planetary nature of Uranus. This revolutionary discovery greatly expanded the understood size of the Solar System, and suggested that more worlds might remain to be found. 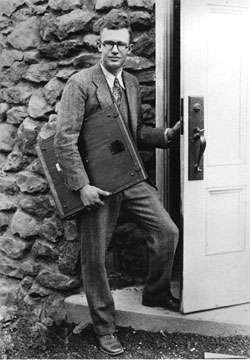 Clyde Tombaugh conducted an agonizing search of the heavens, photo by photo, for almost a year before finding Pluto.

Indeed, careful study of the slightly wobbly orbit of Uranus suggested that its passage was being perturbed by a very large body even further from the sun. Something, it appeared, was exerting gravitational pull on Uranus from beyond. But it would not be until 1846 when German astronomer Johann Galle, using coordinates provided to him by the French mathematician Urbain Le Verrier, finally observed a large gas planet just where Le Verrier’s calculations had indicated the perturbing object would be. Continued study of Uranus’ orbit suggested that not even Neptune was massive enough to have jostled that planet as much as it was being jostled, and a hypothetical ninth planet was proposed to account for what were believed to be the remaining wiggles. Planet X, as it would come to be called, would be very far from the sun indeed, and while it was predicted to be a gas giant—roughly as large as Neptune—it would be difficult to detect using the telescopes available. For decades, the existence of a further planet (or planets) was debated, but the question was more often taken up as a curiosity rather than as a matter for serious investigation. 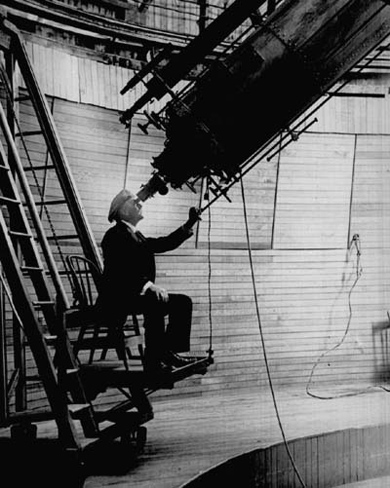 About the Author
Michael Byers is a former Stegner Fellow, holds an MFA from the University of Michigan (1996), and is the author of three books: The Coast of Good Intentions, Long for This World, and Percival's Planet. The Coast of Good Intentions won the Sue Kaufman Prize for First Fiction from the American Academy of Arts and Letters, was a finalist for the PEN/Hemingway Award, garnered a Whiting Writer's Award, and was a New York Times Notable Book, among other citations. Long for This World was also a New York Times Notable Book, was a finalist for the Washington State Book Award, won the Virginia Commonwealth University First Novel Award, and won the annual prize for fiction from Friends of American Writers. Byers' stories have appeared in Best American Short Stories and Prize Stories: The O. Henry Awards.
Social
Share on: Share on Twitter Share on Facebook