The farmers and the helicopters

If someone conducted a poll, asking the question “What’s the first thing that pops into your mind when I say ‘Vietnam War’?” odds are that “Helicopters!” would lead the responses. Military historians often refer to the US-Vietnam war as “the helicopter war.” 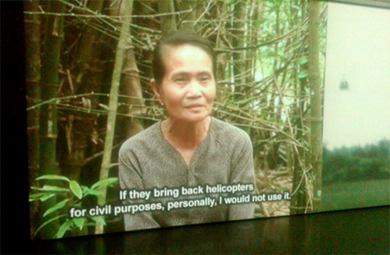 A STILL FROM THE VIDEO INSTALLATION ‘THE FARMERS AND THE HELICOPTERS.’ RUNNING ALONGSIDE INTERVIEWS WITH VIETNAMESE FARMERS IS FOOTAGE OF US HELICOPTERS TAKEN DURING THE ‘AMERICAN WAR.’ (PHOTO: FRANK BEAVER.)

The war helicopter has personal history for me. When I served in an Army Intelligence unit in Saigon in 1962-3, our little cantonment area at Tan Son Nhut Airport was located just beside the Quonset-hut style hangar that housed the first U.S. helicopters that began to arrive in Vietnam in December 1961. Only a wire fence separated us from the air field where the banana-shaped “Hueys” rose vertically and majestically up and away on their daily missions in support of the South Vietnamese Army. Those fleeting images were my closest, albeit indirect, connection to an emerging and ultimately futile war effort.

Certainly there has been no more prevalent an icon in Vietnam War movies that the ubiquitous helicopter. Its hovering presence over Vietnamese jungles and rice paddies has provided Hollywood filmmakers with an innately visceral, visually dramatic symbol of military potential in a war conducted unlike any before it. Who was not awed by that fleet of helicopters in Francis Coppola’s Apocalypse Now (1979) emerging from distant skies in an exhilarating display of mechanical brawn? Yet for all the on-screen depictions of helicopters leading airborne assault missions, transporting soldiers and supplies to battle zones, evacuating the wounded and the dead, the helicopter was never master of the dense jungle terrain and nearly 5,000 of the craft were lost during the war, abandoned or dumped into the sea as the U.S. departed Vietnam in 1975 in the face of unrelenting opposition.

Recently, Vietnamese artists have scrutinized the helicopter from their own perspective, and the differences between their take and American conventions are striking. The conceptual artist Dinh Q Le is a Viet-kieu (“overseas Vietnamese”). He has created a highly imaginative media installation currently on view at the Museum of Modern Art in New York City (through January 4, 2011). Titled “The Helicopters and the Farmers,” the installation consists of a three channel video containing “found footage” of war helicopters in motion, interspersed with talking-head interviews of four Vietnamese farmers and their young neighbor, a self-taught Vietnamese engineer.

In essence this is a meditation on Vietnam past and present. The four farmers reflect on their contact with and memory of helicopters during the American War (as it is known in their country). The young engineer expresses a passion for helicopters and believes that they could be put to use in contemporary Vietnam—for medical evacuations, agricultural assistance and other such beneficial purposes. He notes that the helicopter served the Americans well during the war. One of the farmers, a woman, saw her first helicopter as a child and was told to run and hide when one hovered overhead. She argues that it would not be “moral” to bring back helicopters for any purpose, while the determined engineer, aware of the prohibitive cost of purchasing a foreign-made helicopter, has built one from scrap materials, including some parts taken from abandoned war helicopters. (It is included as part of the MOMA installation.)

Dinh Q. Le’s compelling visual construction shows off his artistry. While one of the interview subjects appears on one screen section, the other two panels display hundreds of short shots of helicopters in action—images appropriated from Hollywood war movies and war documentaries. The visual overload demands multiple viewings. When I saw “The Farmers and the Helicopters” last month, I sat through it at least a dozen times and after visiting the engineer’s homemade helicopter in an adjoining room, returned to the screening theater for additional viewings. The brief film-video repeats itself nonstop, still one is never quite sure that all the omnipresent helicopter imagery has been fully absorbed.

The idea behind Le’s work has its own cultural and personal meanings. Le was born in 1968 in a small Vietnam village near the Cambodian border. When he was 10, the family left Vietnam for Thailand to escape the invading Khmer Rouge, eventually moving on to southern California, where Le grew up and studied art at UC-Santa Barbara. Le later earned an MFA in Photography and Related Media at New York’s School of the Visual Arts. While he has only scant childhood memories of the “American War,” most of Le’s work as a conceptual artist has been war-focused, the effort of someone who works from a bi-cultural “Viet-kieu,” perspective. In an interview in AsiaLIFE  in July he says that as an artist born in Vietnam but raised in California and educated as a student of Western contemporary art, “I’m sort of a combination of the two—the West and the East—the local and the international.” 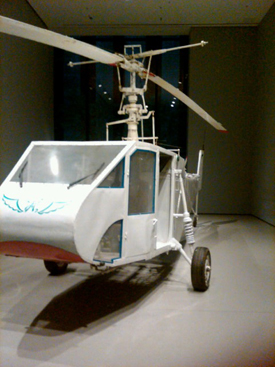 The bi-cultural perspective is evident in “The Farmers and the Helicopters.”

Other cultural referencing is evident in the artistic design of Le’s screen imagery. “The Farmers and the Helicopters” begins with a Vietnamese poem—a literary form that is entrenched in the cultural history of the country. The Vietnamese are readers, reciters, practitioners of poetic expression. During the war Vietnamese soldiers, north and south, wrote poems which were read aloud to one another during downtime. As the poem begins, black-and-white images of dragonflies fill the three-panel screen:

The simple nature poem repeats itself several times, and one begins to see that the swirling dragonflies resemble miniature helicopters. The dragonflies and the poem are suddenly supplanted by American helicopters. Alongside the fleeting helicopter footage we see and hear the elderly Vietnamese woman saying of today’s Vietnamese youth: “They did not witness it. They cannot imagine it. They listen to us as though we’re telling fairy tales.”

To her the helicopter is a best-forgotten element of the past. Her attitude contrasts with that of the impassioned young engineer who studies old helicopters left behind and has built his own. He speaks admiringly of Western countries’ peaceful use of helicopters and claims that he can “sit forever watching helicopters without getting bored.”

This dialectic of past and present is common to the creative work of other “Vietkieu” artists who have viewed Vietnam with combined “local-international” sensibilities. We first saw this impulse on screen in 1992, with Viet-born, French-raised Tran Anh Hung’s movie, The Scent of Green Papaya. The film told a lovely story about 1950s-’60s Saigon domestic life, built from the memories of his parents. It was filmed on studio sound stages outside Paris.

Tran, Viet-kieu French, and Dinh Q. Le, Viet-kieu American, are media artists from the “outside” reexamining Vietnamese cultural (and political) history—past and present. Tran has admitted he doesn’t fully “understand” Vietnam but that what he can do in his films is “reproduce my state of mind, when once again faced with Vietnam.” Like Le, Tran’s artistic quest has been to move the Vietnamese out of the background and up front in film art—to bestow a cultural identity on the people of the motherland. Le’s quest in “The Farmers and the Helicopters” is aimed at both cultural and political identity—the “silencing” of the Western voices that have dominated views of Vietnam in Hollywood and in documentary filmmaking (and which Le said conditioned his own views of Vietnam as a young man growing up in Califiornia.)

The Viet-kieu presence in media expression, seen now in both narrative film and conceptual art, signals an exciting and unique avenue to understanding a country and its people that have so long been a part of our national film art consciousness—and conscience. D. W. Griffith once said “the goal of my movies is to make you see.”

That, too, I would echo is the essential goal of Dinh Q. Le, and other innovative Viet-kieu artists.