The British film “The King’s Speech” —an historical period drama about a royal stammerer—has earned the distinction of being the most awards-nominated motion picture of 2010: 7 Golden Globes bids, 12 Oscar citations, and 14 BAFTA (British Academy of Film and Television) nominations—a grand total of 33.

The film has also won near-universal critical acclaim while giving indication of broad appeal for audiences around the world. Even the film’s creators say they’ve been surprised by how well “The King’s Speech” is being received in the United States and elsewhere. Some social-minded observers have suggested that maybe the film’s plotting about a new national leader, George VI, caught up in difficult political times and trying to “find his voice” contains themes that resonate with contemporary American filmgoers. 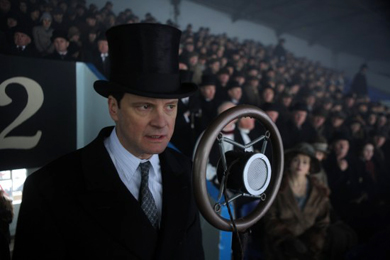 Colin Firth’s performance in ‘The King’s Speech’ was the best of the year, says Michigan Today’s movie maven.

For me the success and appeal of the film comes from the fact that it is an example of old-school film art at its best: a straightforward, chronologically-ordered development of plot and character that minimizes showy cinematics. Director Tom Hooper’s approach to staging and filming the story of “Bertie”/George VI (Colin Firth) and his elocution “savior” Lionel Logue (Geoffrey Rush) is a classic one. With deceptive simplicity, it favors character and dialogue over editing and camera dynamism.

In scene after scene, Hooper begins with a cover shot that reveals the setting and the scene’s principal characters, and then he lets the dialogue direct the choice of shots that will convey the scene’s dramatic essence. I believe the joy of watching “The King’s Speech” is derived in large part from the intense sparring between Bertie and Logue—the repartee revealed simply through lingering close-ups and alternating reaction shots. Character and nuance are always in the forefront—an emphasis that works magnificently to the benefit of Firth, Rush, Helena Bonham Carter (all Oscar nominated) and the other fine actors in the film.

Many scenes are shot in a single-take, as in one in which Bertie is lying restlessly at home on a parlor settee, listening to music on the phonograph. Suddenly he remembers how, at Logue’s insistence, he recorded Hamlet’s “To be or not to be” soliloquy with a musical background so loud he was unable to hear his own voice. Jumping up, he puts the record on the phonograph and hears himself, reading Shakespeare without a stammer. He is visibly startled, as is his wife Elizabeth (Bonham Carter) who enters quickly from the next room—her astonishment captured by a slow boom-up of the camera. The scene plays out with no editorial cutting—an uninterrupted directorial approach that conveys the essence of a “real” rather than a “built” dramatic moment. The structural unity of the scene adds to its dramatic power.

Another such moment occurs when Willie (Jake Hathaway), a young lad recovering from a stammer, is sent out to greet Bertie and Elizabeth as they arrive in the anteroom of Logue’s studio. The boy’s presence and short welcome speech are meant to show off Logue’s success with his patients. It is a simple but beautiful moment that underscores the sense of humanity that courses throughout “The King’s Speech.” 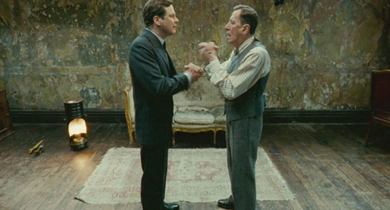 Director Tom Hooper’s style in ‘The King’s Speech’ is classical and simple: his edits and camera work remain virtually unnoticed, allowing the actors to give performances that would be almost equally at home on a stage.

In sum, almost all of the style and technique in “The King’s Speech” is “invisible.” The camera, the lighting, the cutting: Hooper keeps the technique out of the story’s way, emphasizing what is being shown, rather than how it is shown. The one exception occurs in a series of short shots that encapsulate the various physical and vocal exercises that Bertie is put through in Logue’s Harley Street studio. This rapidly-paced montage offers humor and a change of pace (literally) within an otherwise serious, heartfelt account of a stammerer’s unrelenting anguish.

For me, there are two scenes in which “The King’s Speech” is at its most powerful, and Firth’s performance at its top form. The first is the “confessional” scene in which Bertie owns up to his isolated, lonely childhood. Its importance in providing insight into the source of Bertie’s stammer is underscored by a brilliant bit of “dramatic invention.” Logue’s son has left a partly assembled model fighter plane in the room, and as Bertie quietly recalls his childhood, Logue encourages him to glue a wing to the plane. Model building, that familiar boyhood hobby, was denied Bertie within a restrictive royal family. His opportunity now to do so—and to “give wings” to the model—provides an objective correlative that externalizes the scene’s poignant psychological revelations.

The second scene is the coronation rehearsal, a scene that highlights the brilliance of David Seidler’s emotionally-charged dialogue. Angry and distressed by the fate that has befallen him, the now-King George VI lashes out at Logue for his lack of medical credentials, the best ploy he can come up with for deflecting his own fear that he too lacks the “credentials” to be Britain’s war-time king. It is one of the film’s many brilliant moments of character irony. When, in a brazen act of pay-back, Logue flops down on the coronation throne, George commands him to get off this most hallowed of historical seats. “Why?” asks Logue. George responds loudly and with conviction: “Because I am the king! I have a voice!” Triumphantly, Logue replies: “Yes, you do.”

These two memorable scenes only hint at the dozens of others that together make “The King’s Speech” non-stop, compelling drama. I think filmgoers, critics and award-givers are drawn to films that are “well-made” (in the classic sense) and that tell stories rich in character and dialogue and populated with outstanding screen actors. “The King’s Speech” has them all, and that’s the reason for my own great admiration for this unforgettable film.