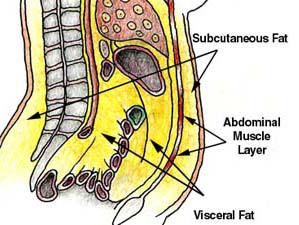 The latest research in the field of human body composition reveals startling new findings regarding how fat in different regions of the body affect physical wellness.Evidence reveals the fat lying deep inside the abdomen, called visceral or intra-abdominal fat, threatens our health more than the fat just under the skin, called subcutaneous fat.

For most people, about 90 percent of body fat is made up of subcutaneous fat, usually located in five major body-fat depots: on the back of the arm; on the back, just below the shoulder-blade; on the hips; in the belly (abdomen); and on the top front of the legs.The remaining 10 percent, the intra-abdominal visceral fat, resides beneath the firm abdominal wall and in the spaces surrounding such internal organs as the liver, spleen, intestines, and gall bladder.

Visceral fat also locates in the omentum, an apron-like flap of tissue under the belly muscles that blankets the intestines. As the omentum fills with fat it gets hard and thick. Another visceral abdominal location is behind the organs and called retroperitoneal-visceral fat.

Visceral fat is not visible to the naked eye. Researchers locate it by using magnetic resonance imaging (MRI) to “see” inside the abdominal cavity. They use the resulting image to estimate the amount of visceral fat a person is carrying.

Even though visceral fat comprises a small percentage of total body fat, recent research indicates it is a more significant indicator for assessing overall health than the more plentiful subcutaneous fat.

Increased visceral fat has been found to link to several chronic conditions including:

Subcutaneous fat serves many purposes. It produces certain beneficial hormones and serves as an important energy storehouse. While visceral fat also acts as an energy storehouse, it additionally secretes hormones and other molecules that directly increase a person’s risk of developing type 2 diabetes, coronary heart disease, and other chronic conditions.

While the MRI and computerized tomography (CT) represent the most accurate measurement techniques to assess visceral fat, these techniques are expensive and not available for routine use. However, substantial research shows that a person’s waist circumference represents a relatively good estimate of abdominal-visceral fat.

The waist girth is taken just above the level of the navel, not the narrowest part of the torso (sometimes referred to as the upper waist). The bottom of the tape measure needs be level with the top of the right hip bone (ilium). Don’t suck in your gut or pull the tape tight to compress the area.I advise you have someone else take the measurement to help reduce error. Have your partner take several measurements and use the average value for all calculations. It is best to take the measurement in front of a mirror to insure the tape is parallel to the ground when making the reading.

For most women, a waist circumference of 35 inches or larger, and for most men a measurement of 40 inches or larger, generally indicates a sign of excess visceral fat and associates with a higher risk for disease development. (Be aware: If your overall body size is very large or you are very tall, these cut-off values may not apply.)

The table below presents the relative degree of risk based on waist circumference in adult males and females.

What to do about excess visceral fat?

In a study comparing sedentary adults with those exercising at different intensities, researchers found that the non-exercisers experienced a nearly nine percent gain in visceral fat after six months. Subjects who exercised the equivalent of walking or jogging 12 miles per week (classified as moderate physical activity) put on no visceral fat, and those who exercised the equivalent of jogging 20 miles per week (moderate-to-vigorous physical activity) lost both visceral and subcutaneous fat!

Spot exercising, such as doing sit-ups, won’t reduce visceral fat, but it can tighten abdominal muscles, which is a good thing.
Strength training (exercising with weights) also may help fight abdominal-visceral fat. One study that followed overweight or obese women ages 24–44 for two years found those doing an hour of weight training twice a week reduced their proportion of body fat by nearly four percent—and were more successful in keeping off visceral fat—compared to participants who received advice about exercise but did not weight train.

References:
Kershaw, E.E. (2004). “Adipose tissue as an endocrine organ,” The Journal of Clinical Endocrinology & Metabolism
Montague, C.T. (2000). “The perils of portliness: causes and consequences of visceral adiposity,” Diabetes
Irving, B. (2008). “Effect of exercise training intensity on abdominal visceral fat and body composition,” Medicine and Science in Sports and Exercise
Ismail, I. (2012). “A systematic review and meta-analysis of the effect of aerobic vs. resistance exercise training on visceral fat,” Obesity Review
Shuster, A. (2012). “The clinical importance of visceral adiposity: A critical review of methods for visceral adipose tissue analysis,” British Journal of Radiology