It’s that time of year again

You’ve just indulged in holiday cheer and food; friends and food; family and food; food and more food! And now the holiday fun is over and you’ve gained more weight than expected.

This month, I’ll explore how calories are measured and discuss how you can best balance calorie intake with calorie expenditure.

Your body extracts the energy trapped within carbohydrate, fat (correct name: lipid), and protein nutrients you consume via processes that power all biological work in your system. This includes muscle action, nerve transmission, and digestive action, as well as lung, heart, and kidney activity, plus all cell function throughout the body.

Since all bodily functions require and produce energy, both food and physical activity can be evaluated by one common denominator: energy.

What is a calorie?

A calorie represents a unit of heat transfer expressed in energy units. Scientists have determined that a calorie, abbreviated kcal for kilogram-calorie, represents the amount of heat required to increase the temperature of one kilogram of water (slightly more than one quart) by 1 degree Celsius.

For convenience, we just say, “these foods contain 930 total calories.”

This 930 kcal represents the heat energy stored within the molecular bonds of the carbohydrate, lipid, and protein molecules that form these foods. When we speak of food calories or kcals, we are indirectly acknowledging that 930 kcals also equals the food’s total heat energy content.

How calories are measured

A heat-measuring instrument called a bomb calorimeter directly determines the amount of heat released when a food literally burns in the device shown here. 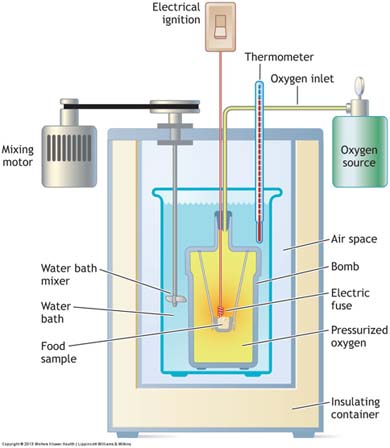 To “burn” the food, an electric current ignites a fuse inside the chamber filled with oxygen. This causes the food to release all of its energy. A container of water that surrounds the calorimeter absorbs the heat released from the “exploded” food. A sensitive thermometer records the increase in water temperature to provide a precise measure of the amount of heat liberated. For example, when a four-inch sector of apple pie weighing 4.7 ounces (135 grams) completely burns in the calorimeter, it releases 350 kcal of heat energy. When we think of the calorie value of the pie, we say it contains 350 kcal.

Because the foods we consume contain different proportions of these three nutrients, the caloric value for a given food, such as apple pie and vanilla ice cream, is determined by the amount of carbohydrate, fat, and protein in an average serving. Thus, a food containing a large amount of lipid has a greater total energy (contains more calories) than a relatively fat-free food of the same weight. For example, one cup of whole milk contains 160 kcal, whereas one cup of skimmed, non-fat milk contains 44 percent fewer fat calories for a total of only 90 kcals (with all the other ingredients being the same).

When one gram of carbohydrate or fat “burns” or metabolizes in the body’s trillions of cells, it yields a slightly lower kcal value because of the body’s inefficiency in digesting and converting all of the stored potential energy in the nutrient to useful energy for the cell.

In the body, the average kcal yield for burning carbohydrate and protein is 4 kcal, while it is 9 kcal for lipid.

Of note: foods with identical kcal values can vary greatly in quantity and/or weight. For example, if you consume one tablespoon of mayonnaise (equal to about 100 kcals), you would have to consume the equivalent of five carrots, 20 stalks of celery, seven green peppers, or one large grapefruit to consume 100 kcals of these foods. The mayonnaise has a high concentration of lipid, which explains why only a small amount yields such a large energy content, and why you have to consume much more of the other foods to consume 100 kcal (because they are essentially free of lipid).

Calories produced by the body 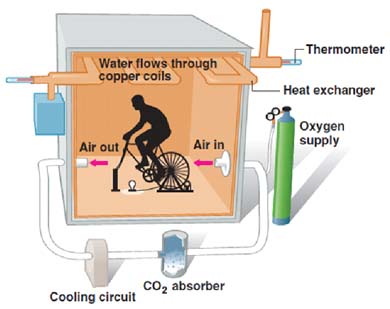 A stream of cold water flowing at a constant rate through tubes coiled at the ceiling of the chamber removes the heat produced and radiated by the person inside the calorimeter. A temperature difference in the water entering and leaving the chamber reflects the person’s heat production (i.e., caloric production).

All energy-producing chemical reactions in the body depend on a continual use of oxygen; thus oxygen uptake by all of the body’s cells reflects energy expenditure.

For each one liter of oxygen consumed in the burning of a mixture of carbohydrate, lipid, and protein molecules during human energy metabolism, five kcals of heat energy is liberated. By measuring oxygen uptake in the laboratory during rest and different modes of physical activity (from archery to yoga), scientists accurately estimate the body’s total energy production or calorie expenditure.

How to use this information

It is possible to establish a caloric balance between energy input (food consumption) and energy expenditure (physical activity). This forms the first step of a successful weight control program.

By keeping track of this data, you can take small but valuable steps to successfully manipulate your caloric intake and output.