Should you be eating organic? 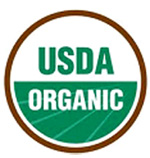 I’m referring to organic foods. Sales of organic foods are growing by 15-20 percent each year in the United States. The pace is even higher in Europe and South America.

By last estimate, more than 10 percent of all fruits and vegetables sold in the U.S. are organic.

Why switch to organics?

There are two major reasons to switch to organic foods whenever possible.

First, most organic foods have higher levels of healthy compounds compared to non-organics. In more than 60 percent of all studies, organic foods were higher in more nutrients than conventionally produced foods; about 30-35 percent of the time there was no difference; and in 5-10 percent of the studies, the nutrient level was higher in conventional food. These data are based on studies that compared the same varieties of fruits and vegetables grown in similar locations (which is the best way to compare organic versus non-organic food).

In a recent study from Stanford University that received wide publicity, the authors concluded, after reviewing some 200 studies, that there were minimal nutritional differences between organic and conventionally grown foods. Unfortunately, the Stanford analysis limited its focus to just a few nutrients, ignored others, and did not look at the whole story regarding the benefits of eating organic. In better-controlled but less-publicized research, scientists conclude the opposite results to the Stanford study.

And this is the BIG DEAL and the major reason to choose organics.

New science on the detrimental effects of pesticides

While it is challenging to get proof of harm to both children and adults from “approved” levels of pesticide use found in conventionally farmed foods, the most compelling evidence is for chlorpyrifos, an organophosphate insecticide widely used on U.S. food crops.

In two studies published in 2011, researchers followed 400 children born around the year 2000 to women living in New York City’s low-income neighborhoods where exterminators routinely used chlorpyrifos to kill insects in the building (the same chlorpyrifos used on conventionally farmed vegetables). The researchers collected umbilical-cord blood or urine to measure how much insecticide the fetuses were exposed to in the womb. Ten years later those children with the highest levels of chlorpyrifos or other organophosphates during pregnancy showed greater risk for different developmental deficits, including lower IQs between the ages of six and nine. In the other study of California farmworkers’ families who were exposed daily to chlorpyrifos and organophosphates while working in the field, children of mothers with the highest levels of organophosphates during pregnancy had lower IQs by seven points or more than children of mothers with the lowest levels of exposure.

In 2000 the Environmental Protection Agency (EPA) banned nearly all home use of chlorpyrifos and severely restricted most other uses of organophosphates in homes, public buildings, and urban environments.

But—and this is hard to believe—chlorpyrifos and organophosphates are still permitted in agriculture! So now most of our exposure to organophosphates comes from conventionally grown fruits and vegetables.

When you consider that we are advised to eat three to four servings of vegetables per day, it should come as no surprise that most individuals are exposed to two to six times the levels of organophosphates on a daily basis from the food they eat.

Surprise! The National Institute of Environmental Health now lists pesticides as a major “endocrine disruptor” that produce adverse developmental, reproductive, neurological, and immune effects in both humans and wildlife. The concern for adults from overexposure to pesticides is with long-term degenerative diseases such as cancer, heart disease, diabetes, and dementia.

Current evidence is strong enough that the President’s Cancer Panel recommended in 2010 that consumers should “choose, to the extent possible, food grown without pesticides or chemical fertilizers.”

In other words, eat organic whenever possible.

Pesticide dietary risk is a function of exposure and toxicity.

Exposure depends on how frequently pesticide residues appear in the foods we eat, and by how much of a given food we eat in a given day.

Toxicity depends on the innate biological activity of a pesticide activity to an individual, and by the timing of exposures.

The Organic Center has developed a Dietary Risk Index (DRI) to quantify relative pesticide risk levels for specific food-pesticide combinations. The DRI represents the ratio of exposure via residues in food consumed in a day, relative to the maximum amount of a pesticide that can be eaten by a person in a day without exceeding the EPA’s level of concern.

Below is a partial list of DRI values compared to “maximum” levels considered safe (score = 100) for the most common fruits and vegetables we eat. 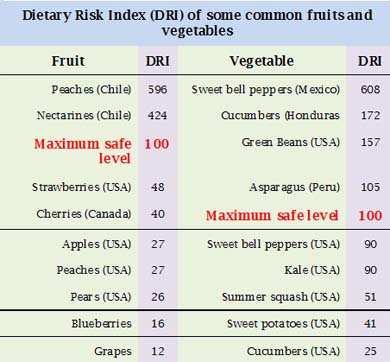 Organic labels and what you can expect

All organic and related labels are independently verified. This means organics are regulated by third-party, government-accredited agents who ensure farmers and processors follow strict standards aimed at promoting ecological sustainability and avoiding materials that are hazardous to the environment and human health.

The following table explains what the organic label on different foods or products means: 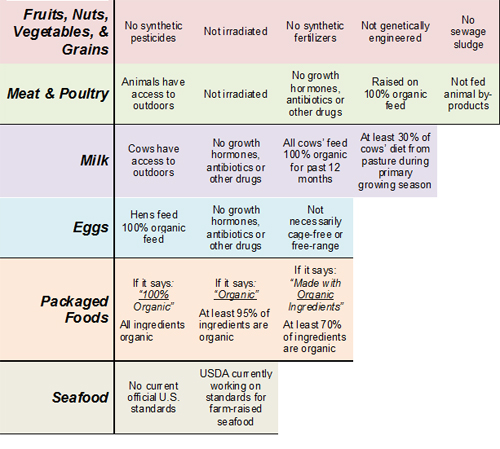 So, should you eat organic food? If you want to reduce exposure to pesticides and antibiotic-resistant bacteria known to be harmful to humans, the answer seems clear.