Do we really need or want genetically modified foods?

While the terms “biotechnology” and “genetic modification” or “genetic engineering” often are used interchangeably, they represent quite different processes and outcomes.

Biotechnology is the general term that refers to using organisms or their components, such as enzymes, to make products that include wine, cheese, beer, and yogurt. Genetic modification (GM), on the other hand, represents a special set of technologies that alter the genetic makeup of animals, plants, or bacteria that would not take place naturally, bringing about alterations in genetic makeup and properties. Combining genes from different organisms is known as recombinant DNA technology, and the resulting organism is said to be “genetically modified,” “genetically engineered,” or “transgenic.” GM products include medicines and vaccines, foods and food ingredients, feeds, and fibers.

Most people welcome GM products in the health and medicine field where genetically altered materials produce life-saving drugs. Not so when it involves our food.

Introduction of GM foods into the world’s food supply at unprecedented levels constitutes one of the largest human nutrition experiments ever performed. Foods are being distributed that have not been adequately tested for long-term human safety or consequences, without a control group, without approval by those participating in the experiment (it’s virtually impossible to know if you are eating GM foods since labeling is not required in the U.S.), and without adequate oversight or a way to stop the experiment if something were to be proven wrong (as is the case in all human experiments).

Since introduction of GM foods, proponents argue they have the potential to enhance taste and quality; reduce maturation time and hence time-to-market; increase nutrients, yields, and stress tolerance; improve resistance to disease, pests, and herbicides; and produce “new” products and growing techniques. While many of these promises have been achieved, not everything is so rosy.

A growing body of evidence connects GMs with various health problems, environmental damage, and violation of farmers’ and consumers’ rights.

In nearly 50 countries around the world, including Australia, Japan, and all countries in the European Union, there are significant restrictions or outright bans on the production and sale of GM food.

The process of inserting a genetically modified gene into the DNA of a plant cell is crude, uncontrolled, and imprecise, and causes mutations in the plant’s DNA blueprint. These mutations can alter functioning of the natural genes of the plant in unpredictable and potentially harmful ways. The American Academy of Environmental Medicine 2009, after reviewing numerous studies on GM foods, recommended that physicians advise patients to avoid them when possible (www.aaemonline.org/gmopost.html).

Before the Food & Drug Administration (FDA) allowed GMs into food without labeling, FDA scientists had repeatedly warned that GM foods could create unpredictable, hard-to-detect side effects, including allergies, toxins, new diseases, and nutritional problems. They urged long-term safety studies, but were ignored.

Since then, different research findings on GM foods have revealed the following:

Most importantly, unintended, uncontrolled mutations occur during the GM process, resulting in unexpected changes in the crop and foods produced from it. These unexpected changes can create more opportunities to interact with other organisms and the environment, generating even more unintended and unpredictable side effects.

How to avoid GM foods 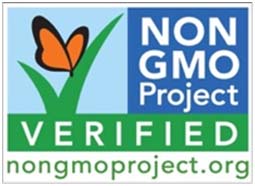 The transgenic AquAdvantage salmon is an Atlantic salmon that has had its DNA spliced with a growth hormone gene from the unrelated Chinook salmon and anti-freeze DNA from an Arctic eelpout that stimulates year-round growth, thus creating a fish that its developer claims can grow up to twice as fast as conventionally raised Atlantic salmon. If approved, the AquAdvantage salmon would be the first-ever GM animal approved for human consumption. 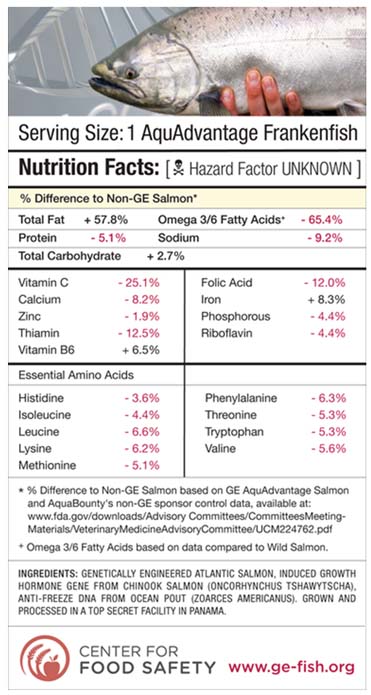 The FDA has yet to require or conduct any studies to assess possible long-term health impacts of eating GM animals; however, several independent studies have produced findings that leave cause for serious concern. For instance, the routine use of antibiotics to cont

Increased disease susceptibility could mean transgenic fish may then require more antibiotics. Human health also could be jeopardized as a result of antibiotic-resistant bacteria and exposure to certain classes of antibiotics that may cause allergic reactions.

In another study, concerns were expressed that both toxins and growth hormones had a high potential to end up in consumers’ bodies. Also, it has been shown that genetically engineered salmon possess 40 percent higher levels of the hormone called IGF-1 (insulin-like growth factor 1), which has been shown to increase the risk of certain cancers.

The graphic below shows an example of comparisons between the AquAdvantage “Frankenfish” and non-GM salmon, based on the best available evidence to date.

Do we really need such fish?