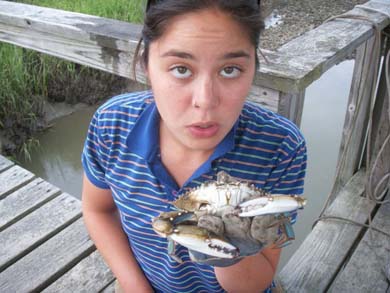 Liz Wason is a fan of all sorts of creepy, crawly creatures. (Image courtesy of Liz Wason.)

Not content to keep such bizarre revelations and images to herself, Wason, MS ’09/PhD ’12, writes and produces the audio podcast “hugabug.” In five minutes she delivers the most comedically absurd and irreverent aspects of science she can find, from bugs cloaked in fecal matter to bats making happy hour of regurgitated blood. She combines vivid visual metaphors, underground music, and well-chosen sound effects to captivate listeners with some of the most obscure aspects of nature.

“I forget sometimes that people can be very different in terms of what they consider to be foreign or frightening, because I’m so used to bugs and enjoying the natural world,” Wason says. “I hope that by sharing my fascination with these things I may get someone else to be comfortable with a part of the world they never thought about. But I do walk a fine line between accurate science and the utterly disgusting or inappropriate.”

The best “hugabug” stories are memorable, straightforward, and fun to tell, says Wason. Exhibit A: the bombardier beetle that farts to elude predators. As a kid, Wason saw an image of a bug rocketing through the sky off an exploding cloud. It left an indelible impression, and Wason used it to launch her radio series when she found a home on U-M’s own WCBN radio. The weekly series has since ended, but the episodes are archived at Wason’s website, lizwason.wordpress.com.

“The bombardier beetle isn’t actually making others suffer through explosive diarrhea, but those descriptions help you imagine and understand what actually is going on,” she says. “Instead of presenting information through an objective, detached, outcome-oriented lens, I prefer to play with content that is ironic and entertaining in itself. I just try to stretch out a single repulsive fact by describing every detail about it.” 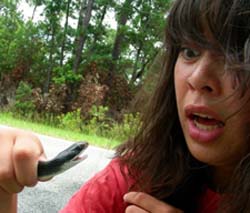 Since embarking on her academic journey toward a PhD in ecology and evolutionary biology, Wason has discovered a wide range of animal behaviors by reading books, spending time with “science nerds,” and hanging out at field sites across the country. Her scientific brain naturally gravitates to the odd habits of animals. Her storyteller brain naturally compels her to share those odd habits with others.

“I get such a kick out of people’s reactions,” she says, recounting the time she explained to fellow PhD candidates how male bedbugs pierce their female paramours in the abdomen in order to reproduce. A quick count of puncture wounds reveals which females are getting the most action.”People were so grossed out, appalled, and fascinated by this information,” Wason says, “but they were laughing.”

Listen to an episode of “hugabug”

Luckily the crew at WCBN allowed her to push her creativity to the limits, opening her eyes to a possible career in media as a science educator and entertainer. She is currently exploring ways to bring “hugabug” to a wider commercial audience as she produces new online episodes.

“Entertainment seems like a good foot in the door to allow information to enter,” she says. “I had the freedom at WCBN to be honest, jarring, controversial, and confrontational. It’s nice because volunteers at the station, along with the research scientists in U of M’s Department of Ecology and Evolutionary Biology, share the ideals of exploration and discovery.”

So while the average person probably won’t go out of their way to explore random oddities in the pages of a dry academic journal, they might be drawn to an alternative audio tale, complete with an infectious soundtrack of samples ranging from Henry Mancini to the Dust Brothers.

And make no mistake. The scientist in Wason is aware she is crossing lines now and then, assigning human attributes to her subjects’ unusual behavior. Call it anthropomorphism, but the entertainer in Wason is eager to give misunderstood creatures a voice that says, “Here I am! Don’t squish me. I am a bug that does cool things.” 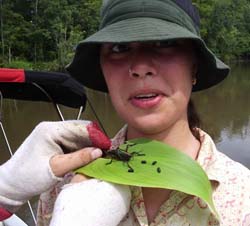 Her hope is that, by sharing weird news from the world of animals, “hugabug” may reduce human xenophobia about strange and mysterious life forms. “Why do we use human standards to judge what is ‘normal’ or ‘gross’ in the natural world?” she says. “I mean we can’t regenerate parts of our bodies or grow new organs and appendages like some animals can. I’d love it if ‘hugabug’ helped to expand our insular little human bubble, which would allow us to understand ourselves and the world a little better.”

In fact, humans may come to realize not how separate we are from these animals, but rather how similar we may be at the core. The more we understand them, the less peculiar their behavior may ultimately seem, she says.

“I think it’s fun and interesting to imagine swapping roles with a creature,” Wason says. “I mean, what would you do if you were just sitting in a restaurant trying to eat some food and some jerk came up and tried to take a bite out of you? You’d rip out a repulsive fart, right?