The many hats of Robert Altman 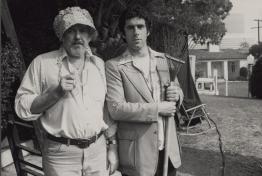 A new and exciting opportunity for film research is blossoming at the University of Michigan through archival contributions to the University Library’s Special Collections division. Already up and running is the Robert Altman archive—a massive trove of materials spanning Altman’s full career as a television and film producer-director as well as opera director.

A third major film-related archive underway—but not yet released for perusal—will be that of John Sayles, director of such renowned independent films as Return of the Secaucus Seven (1979), Lianna (1983), The Brother from Another Planet (1984), Matewan (1987), Lone Star (1996), and Amigo (2010). Sayles’ archive promises a treasure chest for researchers because of his all-encompassing involvement in the filmmaking process. His filmography includes his work as author of 35 screenplays, director of 21 films, editor of 15, and actor in 26.

U-M’s archival holdings are available to scholars as well as the general public. Requests for research assistance can be made by registering online with the Special Collections Library staff.

A life in cinema

The Altman archive comprises 600 boxes of materials: props, costumes, banners, posters, video interviews, and newsreel footage.
An outstanding indication of how the archives can be utilized, and a sampling of what they contain, is evident in the work of students in a Screen Arts and Cultures class taught this past semester at Michigan by Professor Matthew Solomon. The course, “Major Directors,” explored the careers of Altman and Welles. Using the archives, 20 students carried out individual research projects and as a group exercise created a public installation that details Altman’s remarkable career. Currently on display (until June 30) the exhibition, titled “The Many Hats of Robert Altman: A Life in Cinema,” offers an exciting glimpse into the range and depth of memorabilia in the Altman archive. The installation is in the gallery on the first floor of the Hatcher Library.

One is greeted at the entrance to the gallery by an array of flying banners that contain a dozen or so portraits of Altman’s adored and adoring actors—beginning with Elliott Gould and ending with Geraldine Chaplin. To the left of the banners is a prominent Altman quote: “By the time the film is cast 85 percent of my creative work is done.” This is an apropos statement because Altman earned the reputation of “actors’ director,” often allowing his cast members to supply their own dialogue and to help in the development of characterization.

Archival items in the installation are thematically oriented to highlight the narrative scope of Altman’s films and the innovative, maverick-like artistry in them. He loved to break conventional filmmaking rules. The first section, labeled “Altman and Genre,” displays photographs and commentaries on his nontraditional takes on American movie archetypes: Detective (The Long Goodbye, 1973); Gangster (Thieves Like Us, 1974); Western Hero (Buffalo Bill and the Indians, 1976); and Sci-Fi Adventurer (Quintet, 1979).

From here one moves through the exhibit to the “Overlapping Dialogue” section. Altman was fond of a multi-layered soundtrack with overlapping foreground and background dialogue, each recorded area being heard with full-microphone presence.

An audio sample of Altman’s sound-music innovations in Nashville (1975) is available at a listening station. Commentary also is included on the use of lighting and camera, notably a penchant for a sustained mise-en-scene through long camera takes and minimal editing. At a viewing station there are trailers of Altman’s films where one can watch examples of his directing techniques.

Among the most striking visual images in the exhibition are color set sketches by son Stephen Altman for the acclaimed British mystery film Gosford Park, directed by Robert Altman in 2001. The exhibit points out that Altman frequently used family members in his film productions. Fourteen-year old son Michael wrote the lyrics for the song “Suicide Is Painless,” a thematic part of the musical soundtrack for M*A*S*H. (1970). 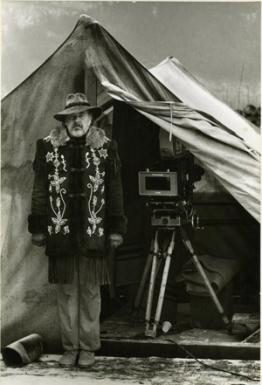 A section on the ins-and-outs of the filmmaking process includes samples of script development, and written exchanges with composers and musicians. Particularly revealing here is a liner note written by composer John Williams for the album release of the music he had scored for Altman’s Images (1972). The liner notes include an account of Williams’ inspiration for creating film music that would carry a relationship with the screen characters. Williams’ gift for such musical accompaniment would later see his reputation grow in scores for the classic Star Wars series and for the chilling fright film Jaws, to name just two.

Through letters, telegrams, and critics’ reviews, the exhibit touches on the varied responses to Altman as both a revered and scorned filmmaker. It’s fun to read the initial reviews of Nashville and McCabe & Mrs. Miller (1971)—often nasty—and to consider them in contrast to the eventual, unparalleled regard bestowed on the films. Nashville would later be ranked by critics as one of the 25 greatest films of the second half of the 20th century. One letter on display about Nashville is especially notable. It’s a March 15, 1983, typed note from Richard Nixon asking Altman about the possibility of a cassette copy of Nashville, his daughter “Julie’s favorite film, but one which I did not get to see.” It’s a quaint little item that speaks to Altman’s reach as a filmmaker.

The thrill of discovery

Undergraduate student Katherine Sherry, who discovered the Nixon letter, said this about her class and the archival research experience: “I had been a fan of Robert Altman since I saw Gosford Park. Having learned that the University had acquired his personal collection, I was already set on exploring it myself. Then I happened to hear that Professor Solomon would be teaching a class that was to partly focus on this very task. The experience has been one I’ll never forget—a rare undergraduate course in which students were not only instrumental in shaping the curriculum, but were entrusted with the responsibility of actively researching and curating an ambitious exhibit that provides an intimate glimpse into the life and career of a great American filmmaker.”

One can only guess at how much more there must be waiting for discovery in the archives. I spoke with Greg Brown, another member of the “Major Directors” class. His own research project had been focused on film locations and music. In the course of the semester Brown went through approximately 600 boxes of archival materials—finding an incredible assortment of items yet to be displayed: props, costumes, banners, posters, video interviews, and newsreel footage—plus a wealth of personal and professional correspondence. While I was chatting with Brown he pulled up an image on his computer, one of his favorite archival discoveries: a pencil-drawn, black-and-white self-portrait Altman had drawn in 1943. That was almost 70 years ago when Altman was 18 years old. Now the drawing resides in his archives, an early formative relic at the forefront of a long and unforgettable artistic journey. Fortunately, this American artist’s legacy will continue to grow because of this rich resource and its availability to those who seek it out.