My annual sojourn to London and research at the British Film Institute Library coincided this year with the National Theatre’s revival of Shelagh Delaney’s 1958 groundbreaking drama A Taste of Honey. Since 2012 the BFI Library and National Film Theatre have been next door to the National Theatre complex on London’s South Bank. The two cultural treasures are within yards of one another, a true convenience for lovers of both film and theater.

I saw the play revival of A Taste of Honey in the National’s Lyttelton Theatre and screened Tony Richardson’s 1961 film adaptation at the remarkable Mediatheque viewing center next door at the BFI. The Mediatheque, open six days a week and free to the public, offers 14 individual viewing stations where one can watch, stop-start, and analyze any of the 2000-plus British films and television programs in the BFI archives.  Any cineaste visiting London should, as the Brits say, “have a look.” The dual experience of watching the play revival and revisiting the film provided an unusual opportunity for exploring A Taste of Honey’s unique and lasting place in British theater and film history. 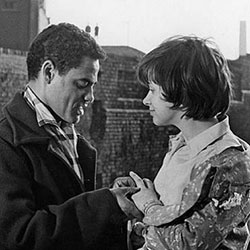 Actors Paul Danquah and Rita Tushingham helped usher in a more naturalistic form of British cinema by way of the film adaptation of Delaney’s play, “A Taste of Honey.” (Woodfall Film Productions.)

Shelagh Delaney was just 18 years old during the onset of Britain’s Free Cinema “angry young man” movement in the mid-1950s. The Free Cinema label originated with the screenings between 1956-59 of six National Film Theatre programs, consisting primarily of short documentaries that examined the realities of working-class life in Britain. The “free” movement term carried over into popular class-conscious novels of the time: Room at the Top, Saturday Night and Sunday Morning, The Loneliness of the Long Distance Runner. Each of the books was adapted into a notable motion picture.

John Osborne’s play Look Back in Anger, first performed in 1956 at London’s Royal Court Theatre, spurred the thematic and stylistic labels “angry young man” and “kitchen sink drama”–the latter a reference to dreary stage settings designed to create a sense of stark realism in the mise en scene. The protagonists in the above works have been collectively described as British “loners” living their lives outside cultural norms and expectations.  A Taste of Honey marched right into this expanding new realm of class-conscious expression in British literature, theater, and cinema, although Delaney always maintained that her play, while definitely an example of “kitchen sink drama,” was not the work of an “angry young woman” writer.

Jo’s invitation comes at the beginning of Act II. Ever-neglectful mother Helen has left to “marry” Peter and Jo’s sailor has departed for sea, leaving Jo pregnant and alone. Jo pleads for art student Geoffrey to move in with her, saying “I’ve always wanted to know about people like you.” A unique and convenient friendship develops between the two, whom Jo describes as “beggars–a couple of degenerates.” Later she tells Geoffrey, “You’re just like a big sister to me.” And Geoffrey does become a kind of surrogate mother to Jo. A Taste of Honey, for all its pessimism and breaking of taboos, offers universal themes of vulnerability, need, and human survival instincts played out under the most dire circumstances.

These were significant differences between the “angry young man” dramas and novels whose protagonists were hard-living, hard-drinking, rebellious working-class men. Delaney’s primary characters were women–a mother and daughter who are observed as cultural products of their time–each striving for just a “taste of honey.” The play is harsh, but never raw, best described as a tale of social restlessness, leading to needed but star-crossed relationships. Dialogue exchanges teem with irony and darkly spoken insights.

The power of Delaney’s dialogue is heard in a brief observation, showcased in the video below, as Jo contemplates the nature of existence: “A bit of love, a bit of lust, and there you are. We don’t ask for life, we have it thrust upon us.”

The development and refinements of A Taste of Honey for the stage were conducted in 1958 by legendary director Joan Littlewood, using members of the Stratford East’s Theatre Workshop company. Employing “ultra-realistic” acting techniques the workshop members’ rehearsals led to the creation of North-West England stage personnae with authentic accents, body movements, and gestures.

Littlewood’s longstanding goal had been to move theater acting beyond the mannered, stylized performances within traditional British comedy and drama and toward realistic portrayals of ordinary, contemporary people. In this regard the actors playing A Taste of Honey’s five characters helped transform the range of British theater performance. As Murray Melvin (who played Geoffrey in the 1958 premiere) has said, it did so by presenting the working-class voice “in a serious way rather than as a figure of fun.”

In an interview Delaney maintained the greatest pleasure in her 1959 hit run in London’s West End was seeing bricklayers and taxi drivers attending her play. (In the 1959 London production Avis Bunnage and Frances Cuka played Helen and Jo; when the production transferred to Broadway in 1960 the mother and daughter were portrayed by Angela Lansbury and Joan Plowright. There have been numerous revivals of the play over the past 55 years). 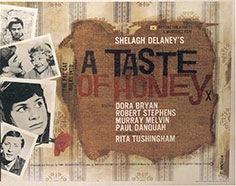 The groundbreaking working-class “voice” was carried forward in the 1961 film adaptation of A Taste of Honey, made at a time when many British actors were yet reluctant to portray characters with authentic colloquial accents. Tony Richardson directed the movie for his newly formed Woodfall Film Productions. He also co-wrote the screenplay with Delaney. (For a full accounting of Richardson and Woodfall see “Talking About Movies: The House of Redgrave.”)

Richardson’s screen version profited from and remains a timeless cultural artifact for two distinguishing reasons. First is Walter Lassally’s drab documentary-like cinematography that moved the action onto the docks and into the streets, saloons, and dancehalls of Salford and into the working-class carnival venue of Blackpool. The exterior world that is only hinted at in the stage play is opened up for a lusty, boisterous, authentic display of North-West England in the 1950s.

Abetting the visual and cultural authenticity is the sensitive cast of performers, led by Dora Bryan as the flighty Helen and newcomer Rita Tushingham as daughter Jo. Tushingham, acting for Tony Richardson’s camera for her first scene on her 19th birthday, was a naturalistic, critical sensation. She had a sweet and feisty screen presence—unpretentious, devoid of makeup and hair-styling, with expressive black eyes and a broad elfish smile. Tushingham was a perfect innocent foil for Dora Bryan’s man-obsessed, neglectful mother. Bryan and her fancy-man lover Peter (Robert Stephens) are the sources of A Taste of Honey’s ongoing comic relief.  Jo’s black lover (Paul Danquah) and her homosexual friend Geoffrey (Murray Melvin) are tender but fleeting presences in Jo’s “young ‘chaotic’ life.”

Critics and audiences alike struggled to find the right words to describe Richardson’s gritty film and its Salford characters. No question about it, A Taste of Honey was unlike anything that had come before. One critic wrote, “While the theme is repulsive … it is well done. (For) all the sordid, repelling, offbeat nature of the story the acting of the leads is commendable.” The U.S. trade journal Daily Variety surmised ‘“the intriguing performance by newcomer Rita Tushingham, imaginative direction by Tony Richardson, and a down-to-earth approach should help this comedy-drama overcome its lack of marquee values” (e.g. unknown cast, hard-to-understand dialects, and uncompromising thematics).

But A Taste of Honey did in fact find its audience just as the stage play had, achieving international acclaim and winning four British Academy Awards, including Best British Film of 1961. It is also listed in the BFI’s greatest 100 British films of all time. The work was a remarkable achievement for an upstart teenage dramatist looking to bring fresh, socially relevant material to British theater.

The immediate and lasting power of the play resided in its inclusive treatment of subject matter that remains relevant to this day: familial conflict, alcohol abuse, teenage pregnancy, racial relationships, sexual orientation, human desire–all universal themes developed spontaneously within a regional, working-class context. Succinctly put, Graham Greene wrote in his review of A Taste of Honey’s 1958 premiere that the play has “all the freshness of Mr. Osborne’s Look Back in Anger and a greater maturity.”

Note: March 2014 brought a series of University of Michigan/London connections. The award-winning musical based on Lawrence Kasdan’s (U-M 1971) film The Bodyguard is playing at the Adelphi Theatre on The Strand right next to the Vaudeville Theatre where The Duck House, a political farce co-authored by Dan Patterson (U-M 1983) is having its West End run. Gavin Creel (U-M 1998) has just received the British What’s On Stage best actor award for his performance as Elder Price in the London 2013 production of The Book of Mormon, winning out over Harry Potter stars Daniel Radcliffe and Rupert Grint, among other stage nominees.