In this month’s Health Yourself Victor Katch discusses lipids (from the Greek lipos, meaning fat). Katch has produced a basic primer on dietary fat, examining different kinds of lipids, their origins, and their role in the body. He discusses the influence of dietary fat in the foods we consume, and takes a look at the ongoing controversy regarding how much and what kind of fat you should be eating to “health yourself.”

In last month’s column I discussed the ins-and-outs of proteins. One of the important points was that the average adult requires a minimum daily amount of protein (about 0.8 grams per kg of body weight) for optimal health.

Lipids refer to a heterogeneous group of compounds that includes oils, fats, waxes, and related compounds. Both plants and animals contain lipids.
While there is no required minimum fat or carbohydrate requirement, there are recommendations for average intake levels (based on body weight or total calorie intake) to promote optimal health. Of course, controversy often accompanies these recommendations. Hucksters are quick to exploit any uncertainties introduced by science in the interest of selling their products.

Ever since scientists began to study the relationship between food consumption and the development of chronic disease, systematic findings have pointed to a causal link between consumption of certain lipids and disease risk. Ongoing research and new discoveries about different types of fat continue to reinforce that link, principally in the area of cardiovascular disease.

Dietary fats: The good, the bad, and the confused

Four important functions of lipids in the body:

Simple lipids (neutral fats) consist primarily of triglycerides and represent the major storage form of fat in human fat cells. Triglycerides contain two different clusters of atoms: one cluster, glycerol, and three clusters of unbranched carbon-chained atoms, called fatty acids, which bond to the glycerol. Fatty acids have as few as 4 carbon atoms or more than 20, although chain lengths of 16 and 18 carbons are most common.

The four different types of fatty acids include: 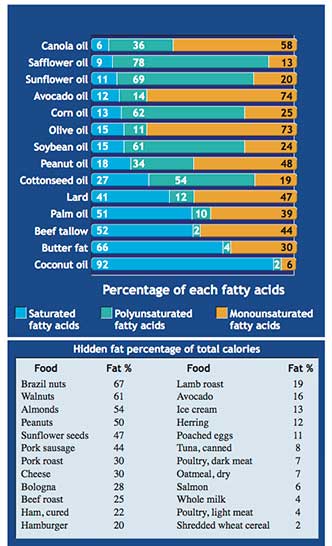 The figure here lists saturated, monounsaturated, and polyunsaturated fatty acid content in common fats and oils (expressed in grams per 100 grams of the lipid). The inset table shows the “hidden” total fat percentage in some popular foods without relative percentage of fatty acids.

Several important points stand out in the figure:

First, most foods containing fat consist of a mixture of different proportions of  saturated, monounsaturated, and polyunsaturated fats.

Second, there are differences in relative proportions of the types of fat found in vegetables and animals.

Omega-3 fatty acids are found both in plant- and animal-based foods. Plant-based omega-3s are shorter-chain fatty acids. These include alpha-linolenic acids (ALA) found in flaxseed oil (53 percent), canola oil (11 percent), English walnuts (9 percent), and soybean oil (7 percent). ALA is considered an essential fat because the body can’t make it. Thus you need to incorporate it into your diet. The most prevalent sources of omega-3s are eicosapentaenoic (EPA) and docosahexaenoic (DHA) acids found in cold, deep-water, fatty fish (cold-water herring, anchovies, sardines, salmon, mackerel, and sea mammals), shellfish, and krill. DHA is also found in smaller concentrations in the organs and fats of some land animals. Scientific studies confirm the importance of both DHA and EPA for optimal health.

Omega-6 fatty acids include linoleic acid (LA), which is the most prevalent polyunsaturated fat in the typical Western diet. It can be found in processed oils–primarily corn oil–and also in sunflower, soybean, and canola oils. A longer-chain omega-6, arachidonic acid (AA), is found in liver, egg yolks, animal meats, and certain seafood.

Most Americans consume between 1.25 to 1.5 times more omega-6 than omega-3 fatty acids. The ideal ratio should be 1:1 or 0.75:1. While important in moderation, excess processed omega-6 fatty acids have been shown to contribute to chronic inflammation, which is most likely the source of just about every chronic disease seen today.

To get the omega-3 to omega-6 ratio closer to the ideal 1:1, cut back on excess vegetable oils. Consume fewer processed and baked foods. Common signs and symptoms of too much omega-6 fatty acids in the diet include flaky skin, alligator skin, frequent infections, dandruff, dry eyes, allergies, brittle or soft nails, poor wound healing, and cracked skin on heels or fingertips.

Lipoproteins are protein-fat carriers that categorize into types according to their size and density, and whether they transport cholesterol or triglyceride. Four types of lipoproteins exist on the basis of gravitational density.

High-density lipoproteins (HDLs) are produced in the liver and small intestine. HDLs contain the highest percentage of protein (~50 percent) and the least lipid (~20 percent) and cholesterol (~20 percent). HDL transports cholesterol away from the arteries to the liver for incorporation into bile and subsequent excretion, hence, HDL is referred to as the “good” cholesterol carrier.

Recommended lipid intake: What to eat? 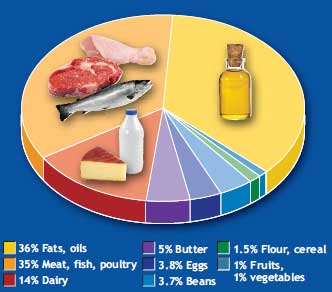 The figure on the right displays approximate percentage contribution of some common food groups to total lipid content of the typical American diet. The average American consumes about 58 percent of their total lipid intake from animal sources with more than 15 percent of the total calories as saturated fatty acids, the equivalent of more than 23 kg (51 lbs) yearly!

As noted in the beginning of this piece, ever since scientists began studying relationships between food consumption and development of chronic disease, systematic findings point to a causal link between disease risk and consumption of too much lipid.

Nevertheless, based on the weight of evidence from animal experiments, as well as observational studies, clinical trials, and metabolic studies conducted in diverse human populations, most major science-based public health organizations throughout the world recommend an overall reduction of saturated and trans fatty acids from the human diet.

The initial surge of global publicity for this study was electric. High-fat, low-carb advocates welcomed the news.  But just as the ink dried on the publication, a revised version appeared, correcting several errors. The corrected version, of course, has not received much press. And although the study’s first author stands by the conclusions, a number of scientists have criticized the paper and called for its retraction.

“[The authors] have done a huge amount of damage,” said Walter Willett, chair of the nutrition department at the Harvard School of Public Health in a Science Insider article dated March 24, 2014. “I think a retraction with similar press promotion should be considered.”

Detractors of the research claim the authors omitted several important studies in their review or chose studies that were poorly conducted. Others cite the inherent limitation of the study design, and find fault with the interpretation of results. The press also played a role, wrongly interpreting the study results. In fact, one of the study authors recently stated: “We are not saying the guidelines are wrong and people can eat as much saturated fat as they want. We are saying that there is no strong support for the guidelines and we need more good trials.” This is a far different interpretation than presented by the press.

Until more research contradicts the wealth of data that support current recommendations to lower one’s intake of saturated fat, cholesterol, and processed foods, I believe the following suggestions seem prudent: